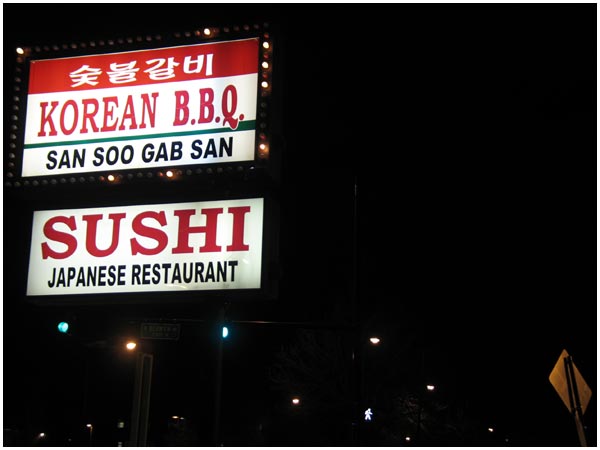 After work today, a few of us (me and Liz, Chris and Leslie, and TJ) met up with Ben (the real Ben, not the mirage) for dinner. The suggestion was for a neat Korean BBQ joint (San Soo Gab San) on Western and Berwyn. 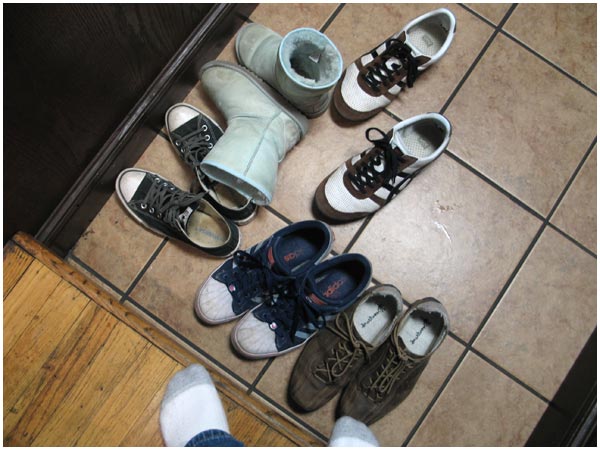 It’s been a while since we gathered outside the context of work, for a non-work event. It was great to (literally) kick off our shoes and enjoy some good food and some good company. 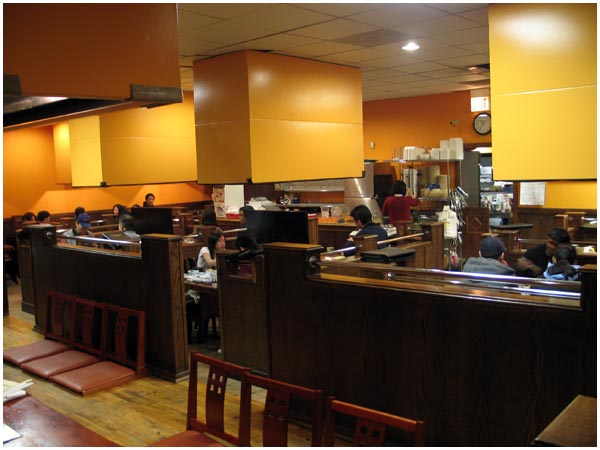 The view from our back table, out over the restaurant. Over every table there were these huge vents, to pick up all the smoke from each table’s barbecues. 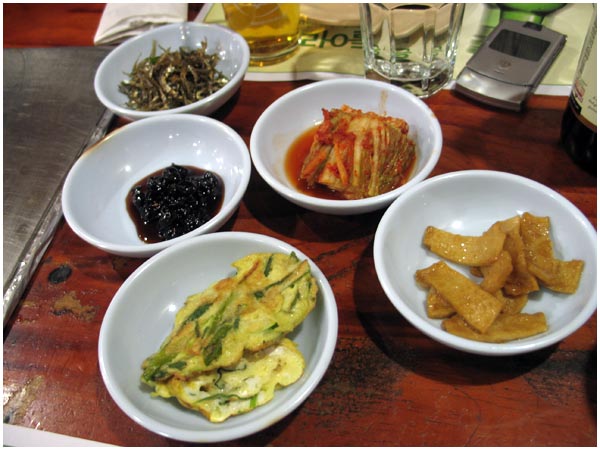 It’s been years since I had Korean BBQ. I remember it involved a bunch of small side dishes (more condiments, really) that you used to build your own meal. Top left going right, it was dried… sardines maybe? Then Kim Chi, I think. Some tofu stuff next, some egg with scallions, and a nice salty bean sauce. 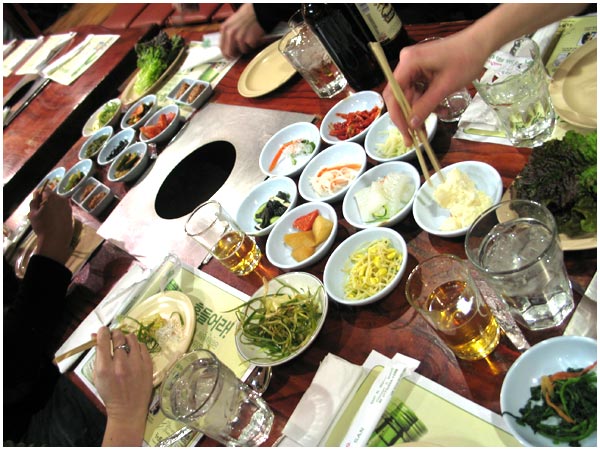 Looking out over the table, there was a nice array of color spread about. I know we had some doubles, but from where I was at… it looked as though every little dish was different. 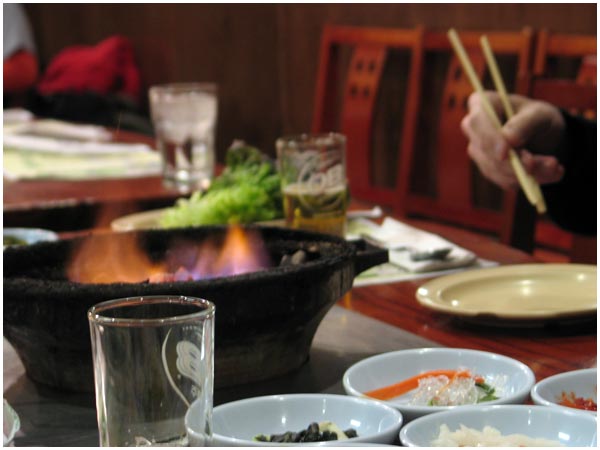 We got two barbecues, right up at the table. Similar to how a fondue restaurant works, you cook your own stuff right at the table. 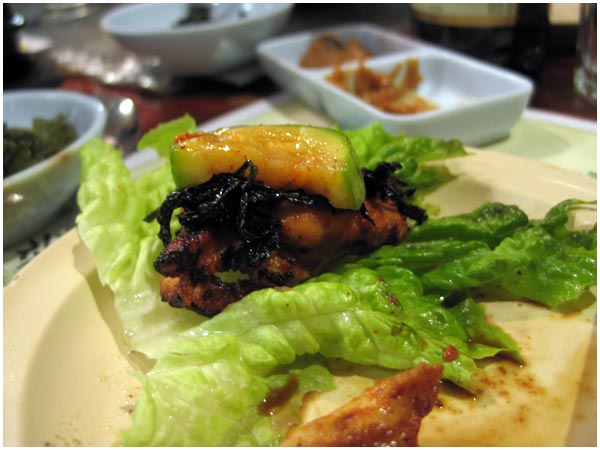 The process of building your own dishes involved placing meat on leaves of lettuce, and then adding condiments of your choosing. This here was the chicken, with a bit of seaweed and spicy zucchini. 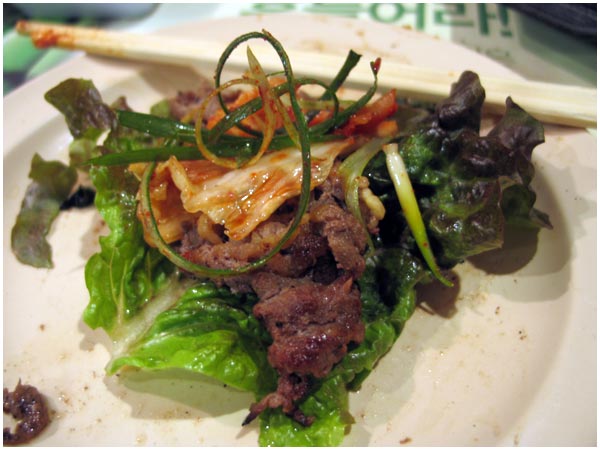 This was thin rib eye, with bean sauce, kim chee (I think) and scallions. The food was all incredibly good, and the whole cooking process made for a lengthy, and lazy-feeling, kind of meal. Overall, the food was a bit heavier than say, something like sushi… but it still felt light, if that makes any sense. 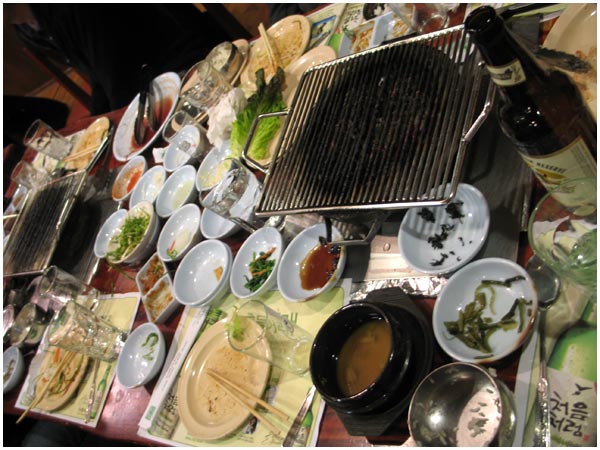 Aftermath. What you’re not seeing here are the other 5 bottles of Kirin beer, somewhere out of the frame.

Three random, interesting things that came up over the course of our post-meal conversation, when we were discussing daytime talk shows:

1) Back in 2005, there was a brief few months where we worked from home, due to construction at the office. My morning routine would consist of turning on WGN news, and letting the TV go while I worked in the nearby office. Around 10:15 AM every day, I would look up and hear this constant beeping coming from somewhere. Eventually, I’d go and shut off the TV, and get back to work.

It took me nearly a week to figure out the pattern: Around 10AM, the Maury Povitch show came on WGN. Soon after, the incessant beeping that started was a result of them beeping out all the cuss words. It was like clockwork!

3) TJ’s mom was on The Montel Williams Show! Turns out, it was a show about quirky small towns, and TJ’s mom runs this annual tug-of-war competition.

But oh no, it’s no ordinary game of tug-of-war. Get this – the event called Tug Fest, and it involves two towns (Port Byron, Illinois and LeClaire, Iowa), one giant 2,400 foot, 600 pound rope… and the Mississippi River. 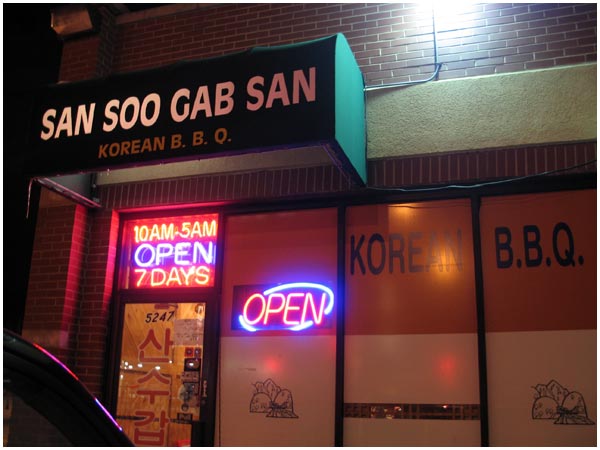 On our way out I stopped to take a few pictures outside. I saw their hours of operation, and my jaw dropped. I went back in to confirm when they were open, and when I asked about the 5AM closing time… our waitress just looked at me and nodded, as if it were the most normal thing in the world.

So – if you’re out on a night of drinking, and circa 3AM you’re no longer in that Taco Bell kind of mood… consider San Soo Gab San, as they’ll still be open for another two hours yet.

« The Ben You See is a Mirage
I Got Mentioned on BoingBoing… Again? Rehi, BB! »