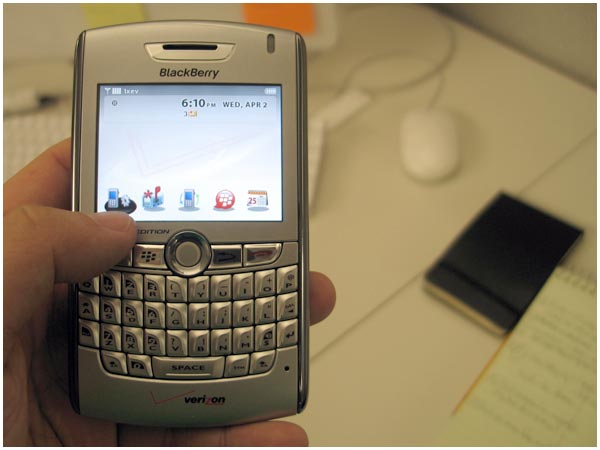 Unlike some of the other folks who have them (Jeff, who’s on call 24/7 should something go awry with our servers and the Affiliates, who tend to be on call for customer support issues), I’m not a link in that “critical” chain. If there’s a fire, I’ll probably get notified eventually… but just not right away.

If anything, the Blackberry is really convenient. I’ll be able to schedule meetings easier, and that alone is more or less what drove me to get it. I have a slight worry that I’ll be constantly checking emails on this thing… and that’s a definite concern. My intention is that this will be a helpful device, and not something I end up feeling chained to.

I had similar thoughts in regard to my cell phone. And I can say it singularly, as I’ve only ever had one phone… and didn’t own a cell phone until two years ago. As much as I’m into technology, I’ve always been a bit leery of mobile phones – and the idea of being available all the time.

I gotta say though, I did get pretty excited during the whole setup process. Brian initialized the phone for me, Jeff is going to register me with our Blackberry server, and I got some good tips from Ben regarding how to sync up my device with my Mac.

I’ll be doing a lot more with iCal in the future, given my particular sync approach. Which is cool, as I’ve always heard a lot of good things about it… but just never got down and dirty with it.

So yay for technology. Once I’ve got the work email hooked up, I’m also hoping to get a few personal email accounts set up on this thing as well. So drop me a line sometime. Although, I’m not going to guarantee I’ll respond immediately.