Liz and I have (secretly) been ring-shopping and browsing for some time now. It’s something I never really posted or updated on here because… that process wasn’t really something I wanted for public consumption.

Needless to say, we decided on a ring. Or more accurately, we built our own from scratch. We worked with Jim Hansen (Liz’s uncle) at Windy City Diamonds, who was incredibly kind and patient with us throughout the entire process.

So the ring wasn’t an complete surprise to Liz. While we visited Jim several times to construct the ring… I took over near the end, and the “when” of things was left up to me. I worked with Jim to complete the ring, and today around noon is when I finally decided to pick it up.

The ring had been ready (and truth be told, so had Liz) for some time now. But I wanted to wait until the weather was a bit warmer, as there was a particular spot where I wanted to propose.

Today, at lunch, I picked up the ring and from the moment I walked out of the store… I realized I couldn’t really wait another day to propose. I had some thoughts about trying to see if it might get warmer tomorrow, or the next week… but in looking up at the sunny sky, ultimately decided that today was the day.

On my way back to work, I called up Liz and we talked a bit about dinner plans (I had called earlier, asking if she wanted to go out to eat). I mentioned having seen a place downtown that I wanted to take her to, and she sounded a bit disgruntled. Today she was at home, and so coming downtown meant she had to trek all the way in to the city. I could tell she sounded a bit put-off, but I mentioned that the place I’d be taking her to was a surprise – and would be worth it.

On meeting up with me at work, the two of us walked down Jackson over to Michigan. I was trying to be pretty nonchalant about the whole thing, and later heard from Liz that she noticed I was “smiling an awful lot.”

Editorial aside: The photos below were taken after popping the big question. But I’m sort of re-creating the whole process here for your benefit, dear reader. For the record, I wasn’t documenting each step of the way (I was way too nervous). Most of these shots happened after the fact. 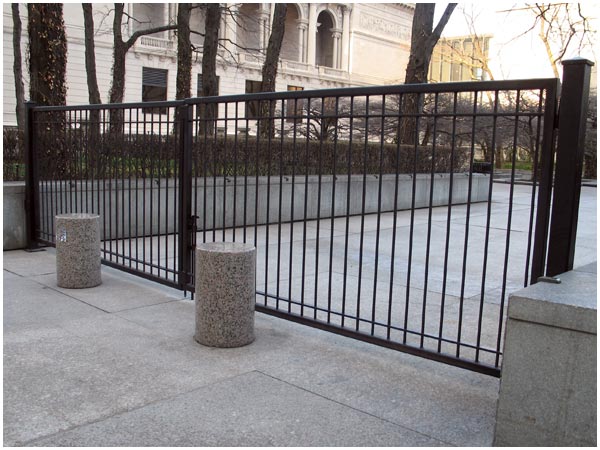 On walking up to the fountain area near the Art Institute, I noticed that the whole area was empty and gated off. Crap!

I had anticipated the fountain still being empty and not active yet… but had no idea the area was blocked off. I paused by the gate and looked in, feigning interest in wanting to go and take a photo of the fountain. Liz looked around, and as I was debating climbing up onto the nearby concrete ledge… she spotted another gate nearby. 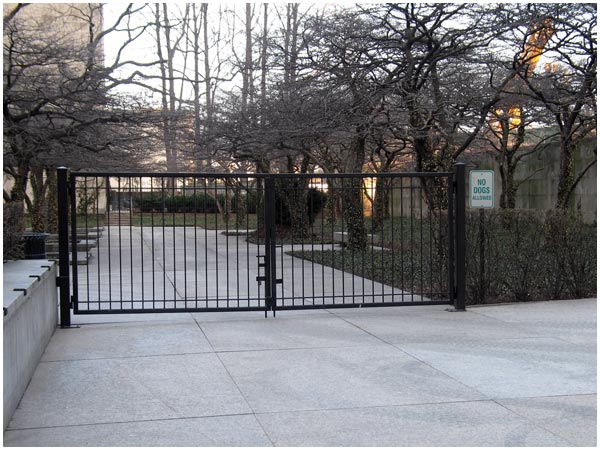 This was the entrance we used, the two of us squeezing through the brush on the far right. After I pushed through, Liz looked over at me and asked if she should come in as well. When I said “yes,” I think she knew something was up. 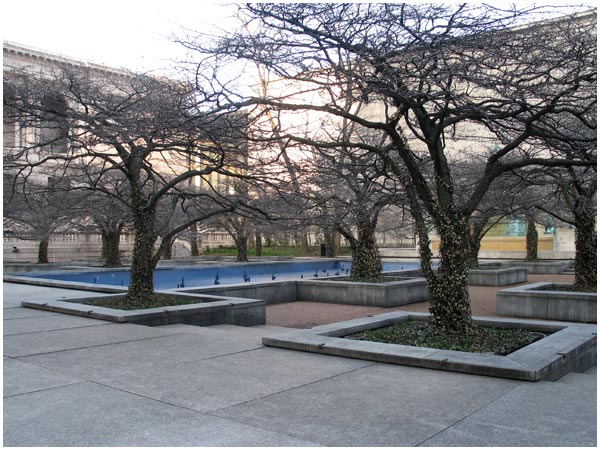 A view of the fountain area. I first learned about this spot from Liz, who took me here for lunch in the early months of our courtship.

It’s one of Liz’s favorite places in the city. And to me, it represents a place that was always present, but something I never knew about, or saw… until she came along. The times we’ve gone to lunch here, I’ve pulled myself out of my regular work routine; out here for lunch, it’s a brief reprise from the day. And it makes me remember all the other important things in my life, that are outside of work. 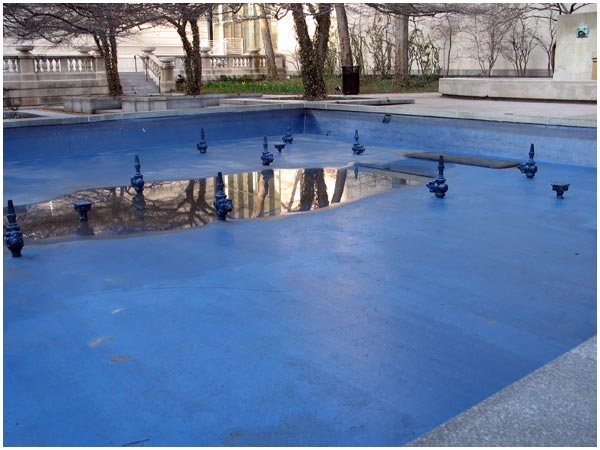 This photo I took while pretending to photograph the empty fountain. About 30 seconds after this was taken, I asked Liz to come over to hold my camera and then dropped down to one knee.

I was pretty nervous the entire time. I think I had more in my head than what I actually said, as a lot of it disappeared the moment I knelt down. All in all though, I think I did a good job as Liz teared up a little bit, during my proposal.

One of the funniest things was… after I popped the big question, she simply started kissing me and saying “oh, honey” over and over. And it went like that for a while, until I had to ask her what her answer was.

And yes. It was yes. 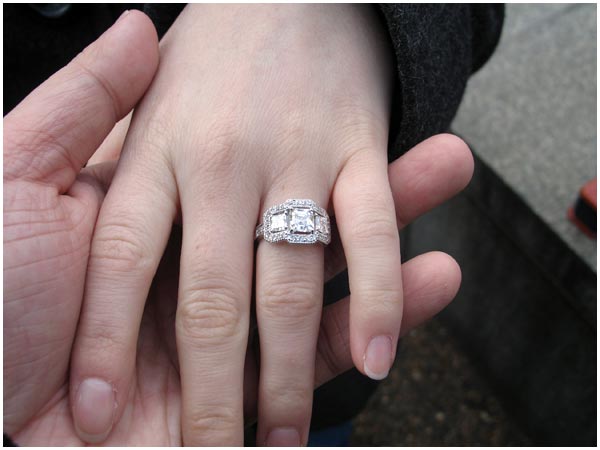 The ring, a few moments after proposing. It’s hard to believe that over two years ago, thanks to our friends Justin, Shirley and Will, Liz and I met one another almost by pure luck.

In looking back, I shudder to think where I’d be now without her. I can’t imagine my life without her. I’ve found someone who’s willing to put up with my grumpiness, my stubbornness… my terrible snoring and my propensity for narcolepsy.

More than one friend (especially after tasting Liz’s cooking) has advised me to “hold on and don’t let go.” And well… that’s pretty much what the plan is from here on out.

Afterwards, we headed over to Maggiano’s for dinner. I was just here a few days ago with Liz’s folks (Julie and Bob), to ask for their permission and blessing. And since it’s also one of Liz’s favorite places as well, it seemed like a good spot to celebrate.

The whole rest of the evening, it was interesting talking with others as I wanted to let everyone know we just got engaged… whether it came up in regular conversation or not. Cab drivers, servers, anybody. While we were waiting for the bus to get to the restaurant, I fought the urge to lean over to strangers and announce our engagement.

Inside Maggiano’s, while we were waiting for our table, Liz went to the bathroom and I was sitting at the bar. The bartender asked if I wanted anything and my reply was “Not right now, I’m going to wait for my… for my… uh… fiancé.”

That moment felt a little weird and a little great, all at the same time. 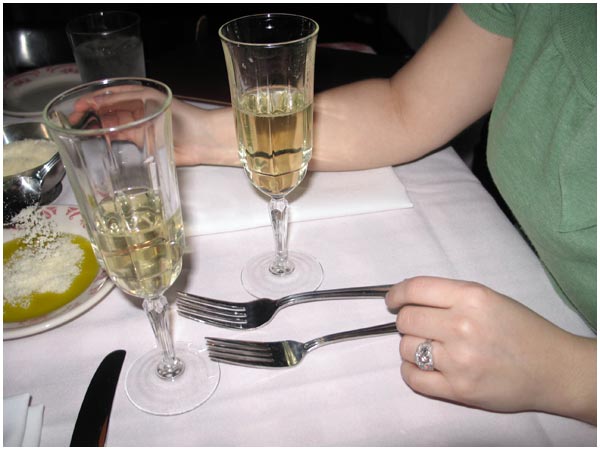 We ordered up some champagne as a pre-dinner celebration. And I gotta tell you, the rest of the night… it was difficult NOT to notice the ring. Almost every gesture and movement had my eyes shooting right back to Liz’s hand. 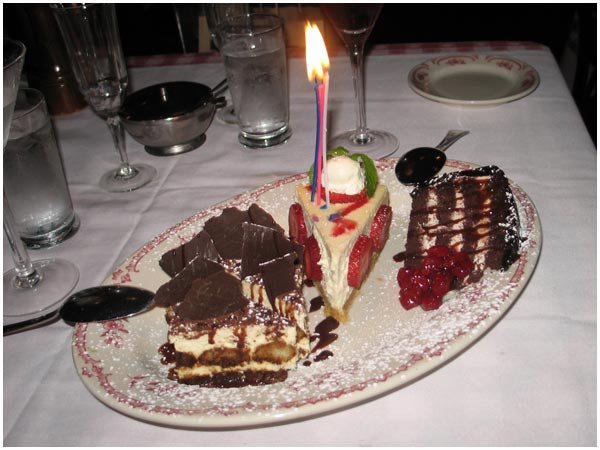 The folks at Maggiano’s were excited to hear we just got engaged, and surprised us with a complimentary dessert plate. The tiramisu there on its own is to die for, but coupled with even more sweets… man. It was difficult to find the room to fit this in, but I somehow found a way. 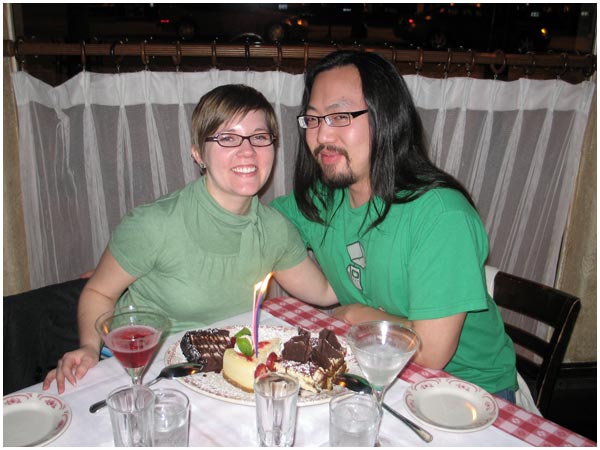 Our server, Jennifer, was really nice and offered to take our photo for us. This is the two of us, newly engaged for all of maybe two hours.

« Comments to This Entry Are Open: Post Away!
James Walks Me Through His Walkthroughs »