As someone who blogs, there are precious few blogs I actually take the trouble to read on a daily basis. For the most part, it’s an updating thing – a lot of blogs out there update infrequently, and without a lot of new content for me to peruse… I’m given little incentive to return.

Rachelle Bowden has been blogging for a good long while, and she updates frequently (daily if I’m not mistaken). I know that every morning when I check out her site, I’ll likely find something new to read, a new photo or two to look at. As a result, her blog has become part of my daily routine.

I was digging through my archives, and wow – I first happened across Rachelle’s blog in 2004. Since then, I’ve been reading and have had this rather intimate, voyeuristic view of her life: I remember when her apartment got broken into, when she first started at FeedBurner, and when Google later acquired FeedBurner.

Through her writing, her photographs, and definitely through her consistent updates… she’s gotten me to pay attention. No doubt, since she’s been writing and blogging for some time now (since 2001), many others are, like me, paying attention. Small wonder then that larger companies are taking notice of this, and targeting folks like Rachelle. 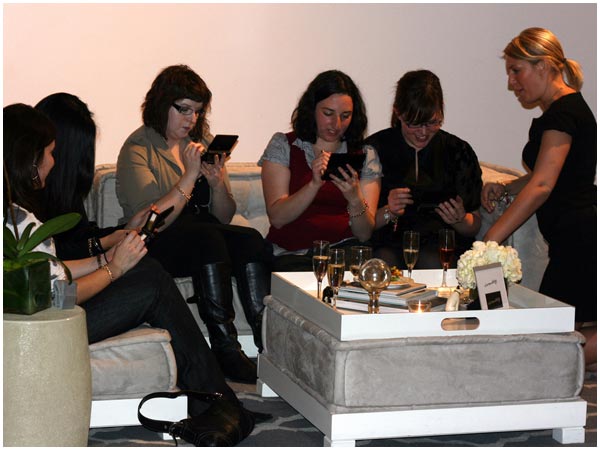 Recently, Rachelle was asked to become a Nintendo DS Lite brand enthusiast. The request in and of itself sounds like someone asking you to sign your soul away… but the end result was actually kind of surprising.

All she had to do was agree to accept a Nintendo DS Lite for a year, and stay in contact with the company. Over the course of the year, they’ll be sending her free games or accessories to try out. After the year, everything they sent she can keep.

In addition to that, she had to agree to host a party, and invite 25-30 female friends. At work, Chris has talked often about how adult women are a large (and growing) target demographic for casual gaming. Coupling those conversations I’ve had at work with him about games and game theory, I think it’s a pretty smart move Nintendo’s making here.

I encourage you to check out Rachelle’s post about her Nintendo Party. The whole event is a lot fancier, and more nuanced than I would have expected. And the more I thought about it, the more I liked Nintendo’s approach. While I know plenty of gamers who happen to be female, I was really fascinated that Nintendo was extending this much effort/money to target an audience that might not be that into video games to begin with.

I’ve found her post pretty intriguing for a variety of reasons. It’s partly due to the marketing theory behind the event, it’s partly due to her role/influence as a blogger. It’s also gotten me thinking about word-of-mouth promotion, and how much every participant is likely talking to their circle of friends about their experiences.

The goal of most businesses should be to have people talking about your product. The biggest trick then, is to ensure that you have a product out there that’s worth talking about. With this particular event, there’s an implied confidence on Nintendo’s part, towards their DS Lite.

In getting Rachelle to organize a group of folks together, Nintendo’s betting on their product being fun/attractive/easy/addicting enough to get everyone there talking. And to get other folks outside that initial group, me included, to pay attention.