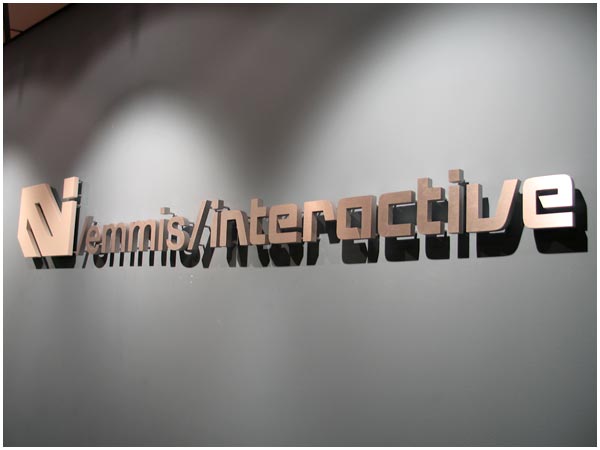 The company I work for is Emmis Interactive. What started as a temporary freelance job working on a leftover flower-power iMac has, nearly six years later, turned into a full-on career.

It’s been quite the ride. There was a time when, back in the day, there were only dial-up connection speeds at the work place. The cable modem at Justin’s house was WAY faster than our connections at work. The answer, of course, was simple: move all the computers to Justin’s house, and set up shop in his kitchen.

What began with four guys working in the back room of a radio station has totally transformed in the past five years. Less than a year ago, we said goodbye to our old space and moved in to our new office downtown. We’ve grown from four into ten into forty, and we’re continuing to grow. Which leads me to the pitch…

Jr. Designer / Web Production
Overview: This position centers primarily on our site launch process. Responsibilities for this job include translating Photoshop .psd files into workable HTML/CSS, and implementing them into our CMS… [read more]

HTML/CSS Graphic Designer
Overview: This position also focuses on the site launch process, but not exclusively. While helping to code sites and add them to our CMS, the HTML/CSS position will also assist with custom projects…. [read more]

Interactive Graphic Designer
Overview: This position focuses on both the site launch process, as well as custom projects. The ideal candidate will be proficient with Photoshop, Illustrator, HTML, and CSS. While excellence in HTML & CSS is a plus, we’re looking for someone with a great eye for layout and visual interactive design… [read more]

Check out the official job postings if you’re interested. And drop me a line too, either via the comments here, email (emmisinteractive.com, fjung), or via phone.

While I’m reviewing candidates and ultimately deciding on who to hire, I can’t make you any promises other than I’ll be pretty straight-up with you regarding the positions we’re hiring for, what we do as a company, as well as the type of person/skills we’re looking for.

I’ve hesitated in mentioning this on the blog because… well, I always viewed there to be a little separation between work and play. I mention my job on here a lot, but it’s always been in more of a “look at the fun we have” kind of way. This post is really “work” work related, if that makes any sense.

For anyone who’s followed this blog since the early days, you’ve likely watched how this company has changed over the years. I love this place, and I love my coworkers as well. Can’t say enough good things.

To tempt you with a little of the fun side of things… I’d also like to point out that we have occasional off-site meetings, make plum pudding with flaming brandy, own a nice ping pong table, throw a pretty fun holiday party, goof around with dangerous toys, play dress-up, throw surprise birthday parties, tackle the occasional snowman, and challenge one another with eating-related bets.

In all seriousness, this is a great place to work, and it’s full good people. I wouldn’t be here if it were otherwise.