Wrist Injury: Visiting the Chicago Center for Surgery of the Hand

Sooo…. remember when I hurt my hand back in December, and didn’t go check things out until January? Well, the problems have been persistent since that time, and I just sort of thought “it’ll get better on its own, eventually” and more or less ignored it. For like, four months.

While I did see some improvement, the pain in my wrist was always still there. I wore the wrist splint the first time for about a week, then promptly took it off. After a month or two… I went back to the doctor and was told to try wearing the split for a few weeks straight, and to see how things felt.

Fast forward to now, and it’s some six months after the original date of when I think I first hurt my wrist. Today, I went to Northwestern for an early morning doctor’s appointment at the Chicago Center for Surgery of the Hand.

Editorial aside: I just took a look at the online bio for my doctor (Dr. Thomas A. Wiedrich). Looks like he did his undergrad at Harvard, and is a consulting hand surgeon to both the Chicago Cubs and the Chicago Blackhawks. Wowzers!

While the name is daunting, I wasn’t going in for surgery… just to have someone take a closer look at what might be going wrong with my wrist. 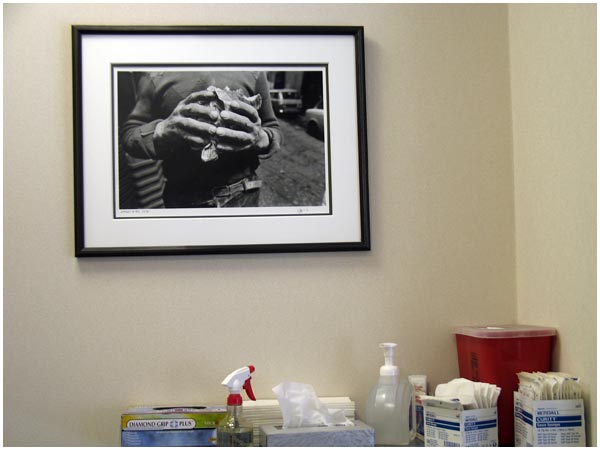 On meeting for the first time, he shook my hand (but I noticed that he didn’t squeeze or apply too much pressure). He quickly asked me a series of questions regarding my injury, and went about pushing and pressing on my wrist.

After about 5 minutes or so of various arm/hand positions, he held my hand in place (with my palm towards me) and began wriggling what I later found out was the Ulna (the long bone in the forearm that’s closest to the pinky, farthest from the thumb).

His assessment – he felt that I had a cartilage tear, specifically in the Triangular Fibrocartilage Complex. 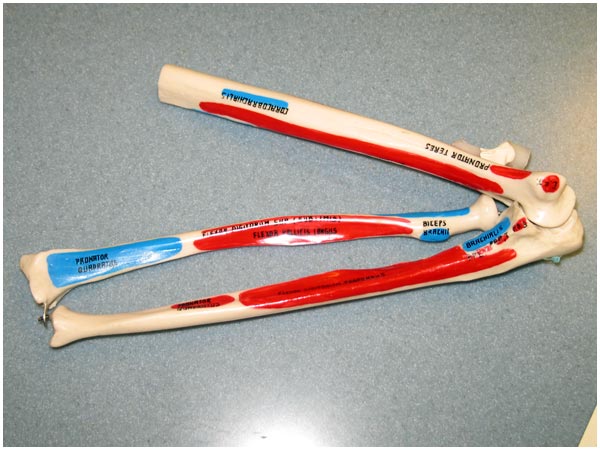 Dr. Wiedrich then went out and tracked down a model, so he could better explain what was going on. I took a few notes, but let me state right here and now that… I’m not sure I’d 100% trust anything I’d say. I think I’m conveying the information right, but when I sat down to write this… I thought I had a torn ligament. In looking over things, I think it’s a torn cartiledge.

If you’ve stumbled across this entry looking for hand doctors, or for medical advice – let me restate: I walked around with this wrist issue for nearly 6 months. Don’t look to me for advice. Do what I didn’t do at the onset: go see a doctor. 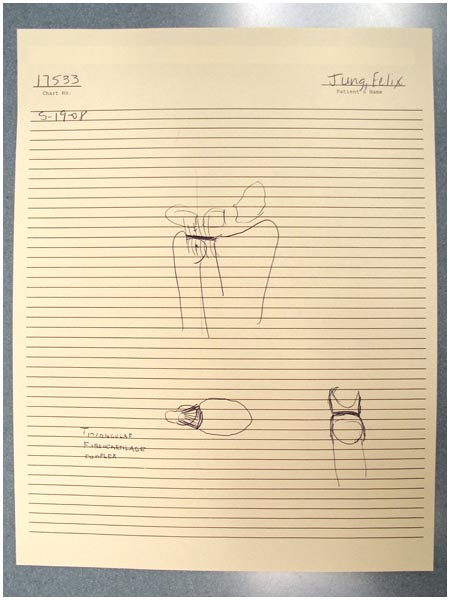 As I understand it, cartilage serves a variety of purposes – the main one being a sort of buffer or cushion between the bones. In particular, the Triangular Fibrocartilage Complex serves as sort of a swivel/pivot for the Ulna (here’s where my medical training gets to be a bit hazy).

When Dr. Wiedrich was doing all that pushing and wriggling? He noticed that my right wrist moved a lot more than my left. In actuality, the bone (the Ulna) shouldn’t have been moving at all. But due to my injury, he was able to move it more than he should have (when doing its job, the Triangular Fibrocartilage Complex should help prevent movement when the wrist is locked). 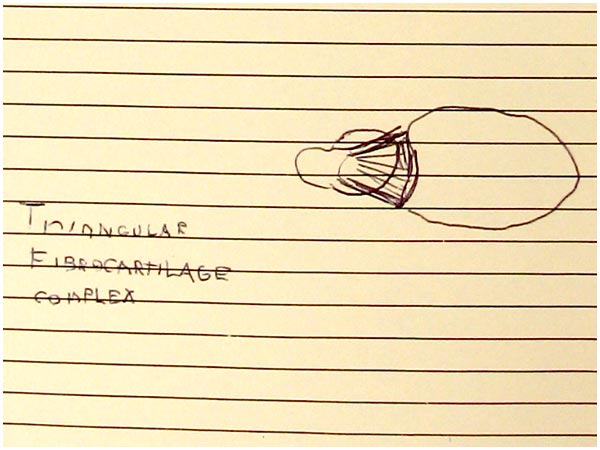 This detail I definitely wanted to share. This piece of paper was facing me the whole time, so in addition to all the drawings… Dr. Wiedrich also wrote this out UPSIDE DOWN.

As he started, I said to him “I’ll be really impressed if you write that whole thing like that.” He then explained to me that he worked at a travel bureau for a while when he was younger, and got into the habit of drawing on maps for visitors. Since he was always showing people how to get from place to place, the maps were always upside down. 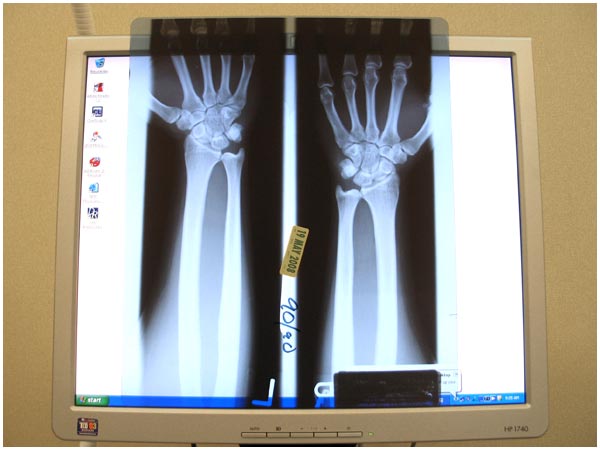 I went off to do a quick x-ray, and the monitor was used as an impromptu backdrop. Nothing much to see here, other than the fact that I don’t have any broken bones.

Now that I stop to look at it… it’s kind of neat that those are my bones in that picture. I don’t know that I’ve ever had any kind of x-ray done (other than the ones at the dentist), so this was a first. I was also surprised at how quickly the whole process was. I got x-rayed and we were looking at the results all in a matter of 10-15 minutes.

Another aside: Dr. Wiedrich was super patient with me, as I asked a lot of questions (something I do when I’m nervous and around doctors), and also paused to take a lot of photos. At one point, while I was photographing the x-rays, he left the room briefly to check on another patient. I overheard him say to another physician in the hallway “he’s taking pictures of his x-ray in there!”

It’s been a while since I’ve broken out the camera. I’ve also forgotten how weird this whole blog thing looks to others, particularly when they don’t understand why I’m photographing everything in the room.

What I found out about my wrists: there’s a thing called the Ulner variance, which (I think) is the distance between the Ulna and the Radius, near the wrist. Typically it’s about 2mm. For me, my wrists have a 4mm Ulner variance. For every 1mm above the norm, it increases the Ulner load by about 18%.

I guess I’m a bit more disposed to injuries in this light, as my wrists take on a bit more stress due to the Ulner variance. I also found out that cartilage tears are fairly common, and typically don’t require surgery. About 10% of people who are over 50 have cartilage tears; surgery is only necessary if pain is an issue.

The final determination was that Dr. Wiedrich wanted me to come back for an MRI. While x-rays are good at looking at bone, MRIs are apparently better for looking at soft tissue. He wanted to take a closer look at the wrist to check for anything “crazy,” and was going to suggest cortisone injections to reduce the swelling. 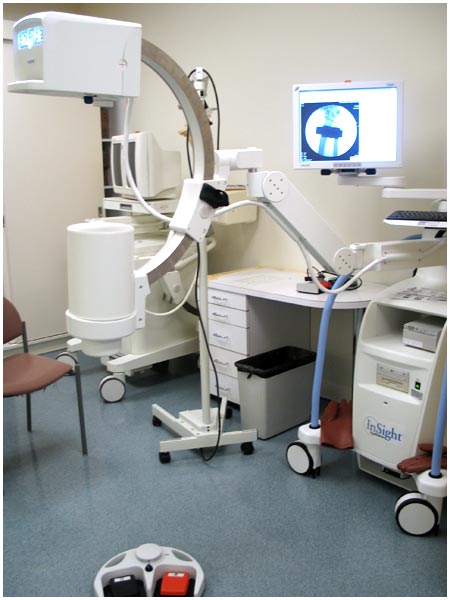 On the way out, we walked by this machine. I remember little of it, and had set my bags down thinking I was to get my wrist re-examined.

Dr. Wiedrich was using it on his own wrist to show me how the foot petals worked, and by the time I got my camera out to record some video… he was done. This machine, he explained to me, was almost as good as an x-ray. It wasn’t quite as good just yet, but getting there. That’s his wrist up on the screen, and the black band is his watch.

So… MRI coming up. I asked, and it’s not one of those movie-type MRIs where you get slide into a hollowed out, coffin-like cylinder. This one is merely for the hand, and a lot smaller? But should be interesting nonetheless.

And for the record – Liz has been telling me to go see a doctor for… well, months now. I’ve just felt too busy with work, and was always being Mr. Stubborn about it all. A few years back, after a Whirlyball party for my birthday, I remember injuring my left hand. This healed (eventually), but took a few months before everything went back to normal. I guess I assumed the same would happen here with my wrist… that eventually, time would just heal it for me.

Related:
Overnight Sleep Study, Northwestern
Seeing a Side of Me I’ve Never Seen Before: Visiting the Ear, Nose and Throat Doctor
Ben Sharks Me on a Bowling Bet, 2002
Bowling with Liz, Diversey Rock’n Bowl
Behind the Scenes with the Pin Machines, Diversey Rock’n Bowl
Q101 Intern Party, Southport Lanes