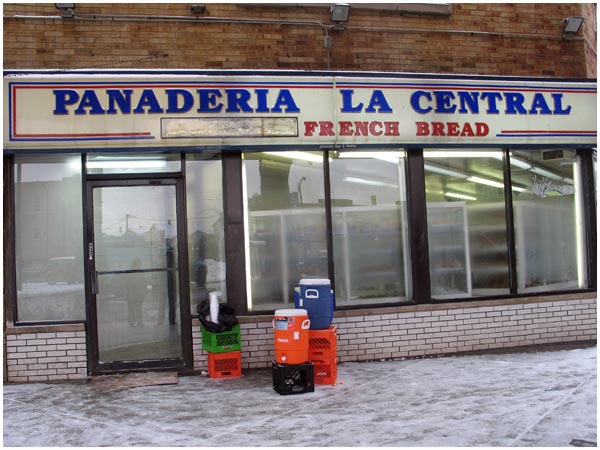 It’s amazing how how routines just simply lock themselves into place, and the next thing you know… you’re doing the same things over and over again. It’s been almost two years since I moved to Logan Square, and I’ve been walking to the California Blue Line stop nearly every day for work. Panaderia La Central is literally right across the street, and it’s only today that I actually went inside.

Most days, as we’re walking to the train, I mention to Liz how good it smells. Walking by, if the wind is just right, you get hit with the scent of freshly baked bread and pastries. Especially in the wintertime, it’s a warm and inviting kind of a thing.

This morning, I had a ball in my stomach. I tend to get stressed out if we’re running late, as I seem to have this thing about showing up late to work. I want to be on time, I want to ensure I’m there by 9AM – or just a little bit after, if need be. It’s a feeling that comes just from me, a stress I cause myself… and I catch myself sometimes getting worked up if we’re running behind schedule.

Today, I felt that stress as we were walking up California… and consciously decided to slow things down. The train had just come in as we were walking the street, and instead of running to try to catch it, I suggested we go inside the panaderia, just to check it out. 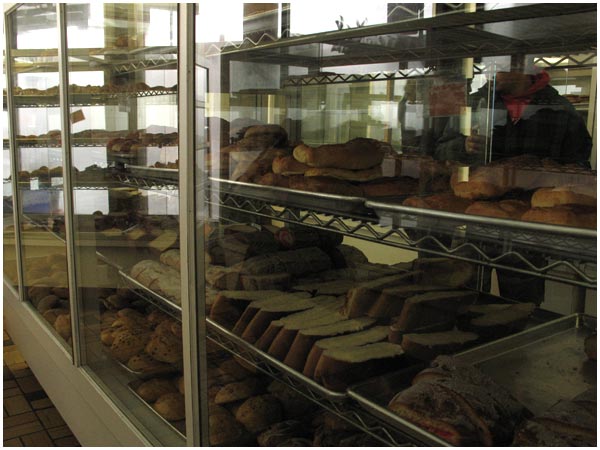 Inside, there were large displays of all sorts of pastries – and I barely recognized a fraction of them. It was an odd sesantion – I figured a lot of things were good, but I simply had no idea what some of the pastries were.

The whole time I was thinking to myself: “I think this is supposed to be sweet. And perhaps it’s delicious. I’m not sure though.” I guess I may have been a bit gunshy, remembering Ben’s encounter with “Salsaghetti.”

The structure of the bakery was that you walk in, grab a tray, along with a pair of tongs… and serve yourself. My original impulse was to grab things that looked familiar to me, but I’m glad I followed Liz’s example of getting something new. I was on the lookout for some kind of danish, but shifted to looking for stuff that I might not normally pick up.

Here’s what I got. I was originally excited by the guy on the right… but the center/filling ended up tasting not so great. I took a few bites, and couldn’t finish it. Where I had expected fruit, it was a bit more like biting into a lemon Starburst. It wasn’t fruity, and a bit more synthetic in taste.

The guy on the left I originally thought was going to be some big loaf of bread, but it ended up being my favorite. It was much lighter than I had expected, and there was a nice coating of sugar all over the top. It was very airy, and akin to eating a lightly fried cake.

I’m so glad we slowed things down a bit this morning, departed from our regular routine and explored a bit by going in to Panaderia La Central today. So many days, I’m fixed in work-mode, and it feels good to remind myself every once in a while to slow down.

And although it was a 50/50 split, overall I’d still say that mysterious pastries are a good thing.

Related:
Salsaghetti – Tamarind Goodness
On the Merits of Curiosity and Being A Little Extroverted
Always Ask

« Five Things You May or May Not Know About Me
News Anchors Dance During Commercial Breaks: WGN’s Robert Jordan and Jackie Bange’s Two Minute Drill »