Earlier this week, Jane and I got to talking randomly about the Twilight Zone. We both discussed a few episodes, including some of the ones we found to be super disturbing (many of them had to do with dolls or ventriloquist dummies that suddenly came to life).

I mentioned a book called The Twilight Zone Companion, that contains little summaries of every episode from all five seasons. I chanced across it as an undergrad, while working as a library page shelving books at the Indiana University Library (if you want the full backstory, check out this post from 2004). 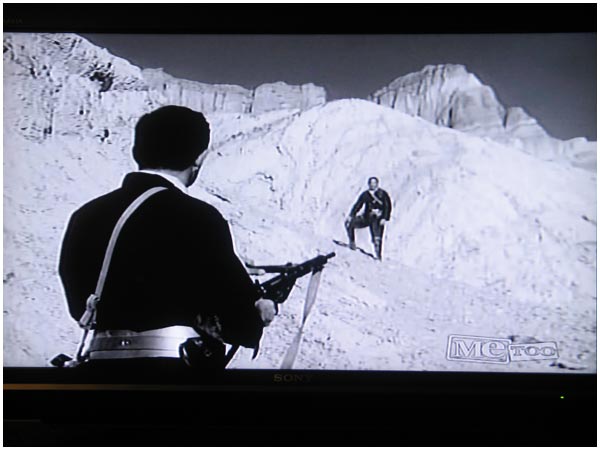 Fast forward to tonight. Flipping around, I happened across an episode of Twilight Zone on TV. I found my book, grabbed my camera, and snapped a quick shot.

This is a moment from an episode entitled “I Shot an Arrow Into the Air.” Based on my book, the original air date was January 15th, 1960.

Let me give you a glimpse of what’s in the book. Here’s the overview/description for this particular episode:

“Her name is the Arrow One. She represents four and a half years of planning, preparation and training, and a thousand years of science and mathematics and the projected dreams and hopes of not only a nation but a world. She is the first manned aircraft into space. And this is the countdown, the last five seconds before man shot an arrow into the air.”

But something goes wrong; the Arrow One disappears off the radar screen and crashes. Three of the eight astronauts survive the wreck. They find themselves on what they take to be an asteroid, with only five gallons of water between them. Corey intends to kill Pierson and Donlin for their water, but before Pierson dies he manages to crawl to the top of a mountain, look over it, and draw a peculiar symbol in the sand. Corey, paying this no mind, kills Donlin. But when he climbs the mountain, he finally sees what the symbol meant: telephone poles. They’ve been on Earth the entire time – in the Nevada desert.

“Practical joke perpetrated by Mother Nature and a combination of improbably events. Practical joke wearing the trappings of nightmare, of terror, of desperation. Small human drama played out in a desert ninety-seven miles from Reno, Nevada, U.S.A., continent of North America, the Earth, and of course – the Twilight Zone.” 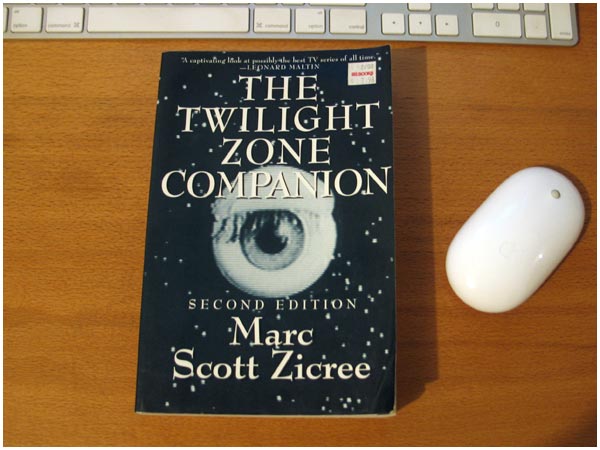 In addition to offering up a synopsis of every episode, there’s a ton of great backstory for each one as well. It was surprising to me how many famous actors all appeared, once upon a time, on this show. Names like Robert Redford, Mickey Rooney, William Shatner, Jack Klugman, Burgess Meredith, Burt Reynolds, Robert Duvall, Dennis Hopper, Dick York, Lee Marvin. Lots and lots of folks.

There’s great little tidbits per episode (details that didn’t make the cut, stories from on-set). And on top of that, there’s a lot of great writing by Zicree about Serling and the other writers on the show. 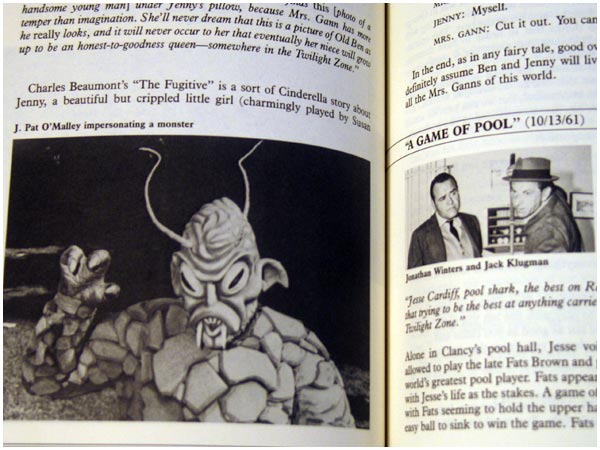 One of the more interesting things I learned is that the medium allowed Serling and others to do their own bit of social commentary. While in the era of black and white television, they couldn’t exactly make shows that dealt with issues like race relations. But in the guise/format of science fiction (space aliens, people with different powers)… they could.

Indirectly addressing heavy topics, the Twilight Zone did its own spin on issues like xenophobia, racism, and how fear/mistrust manifest in the human condition. To me, many of the episodes provide commentary on how we, as humans, deal with one another… and with ourselves.

And, to take it a notch down – many of these episodes are simply great little stories. They’re all little fables in one way or another, some of them teaching valuable lessons (and others that are just downright creepy because of an absence of any lesson).

I’ll echo what I wrote over five years ago: if you can remember more than one episode of this show, I’m confident you’ll really like the Twilight Zone Companion. It was a great read when I first encountered it, and I still get a lot of pleasure out of flipping through the book, and reading over an episode or two. 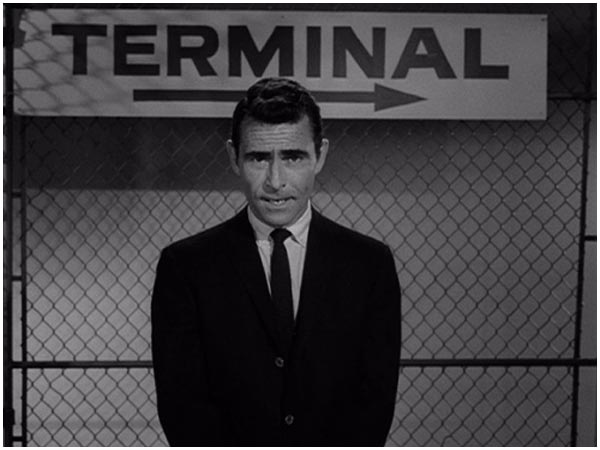 Also: this is one of my favorite photos from the book. The “arrow through the head” is intentional, and also shows off a fairly humorous side of Rod Serling.

Throughout the book, Zicree does a great job filling you in on Serling’s role with the show, and all the work involved in writing episodes, and shooting episodes. More than just the “creepy” guy that’s seen and heard as the show’s narrator, I have a totally newfound respect for Serling after reading this book. More than anything, Serling seems to me a really, genuinely good person – reading over the episodes he penned, there’s a great deal of emotion there. And interestingly, you can tell through his stories how much he cares about people, his sense of justice, of right and wrong.

I can’t say enough good things about this book. You should grab a copy, if for no other reason than Serling rocks.