Bachelor Party, Part 1: A Song 12 Years in the Making

My bachelor party is this weekend – and it’s a multi-day event, spanning from Friday to Sunday. Tonight, the first part was hanging out with friends at Justin’s apartment. I had a lot of people travel in from out of town (Wisconsin, New York, Oakland, and Indiana). Lots of old college friends, and many folks I hadn’t seen in a while. 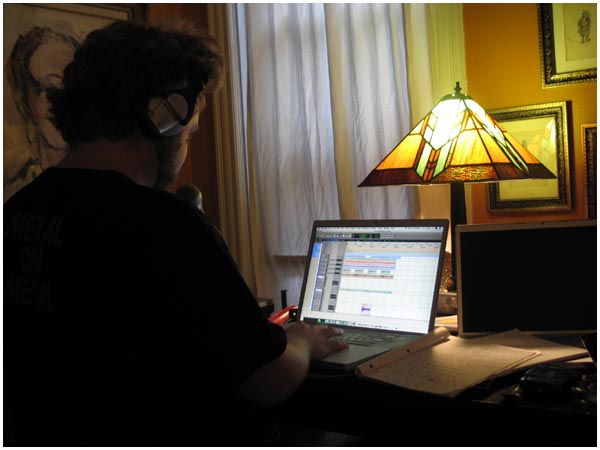 After I was dropped off at Justin’s place, I walked in to find Kevin working on his laptop. He and Alex were working on a song that began as an idea/line over 12 years ago, back when everyone was in college.

The line was: Like Buster Keaton, off a bicycle.

When I showed, they were all several verses into the song. I added some lyrics/lines, and next thing I knew I had on the headphones and was helping sing some backing vocals.

Watching Kevin work with Pro Tools was a sight to behold. Have you ever watched someone who’s really, really good at Photoshop just working away, full speed on coffee? The quick movements and little panels that pop up and disappear – that was Kevin, only with audio. 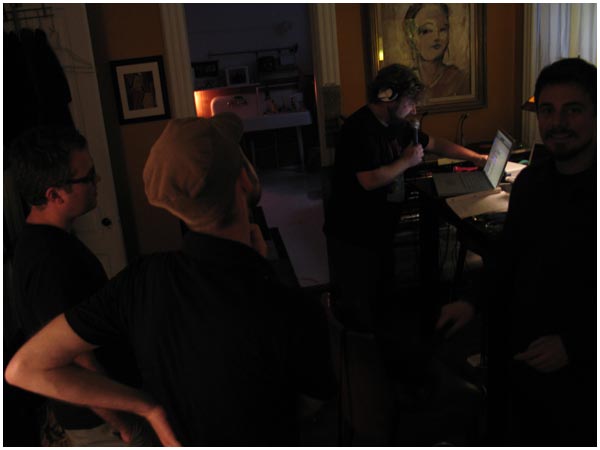 Dave showed up a bit later, and helped out with a little faux trumpet. Before we could get to finishing the song, we all had to take off to meet folks for dinner over at El Cid. 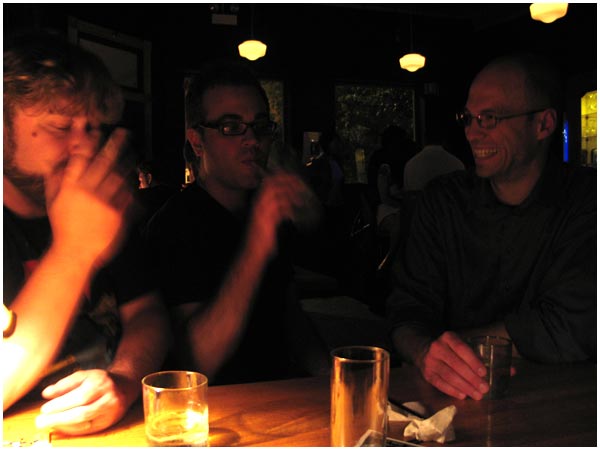 Fast forward a goodly amount. Dinner was out in the patio area at El Cid, and over the course of an hour plus, we managed to slowly accrue all the umbrellas in the place. Post-dinner, we headed over to Weegee’s for a few drinks. There, we were joined by my old college friend Jim – who I’ve known since our Freshman year in college. He was my neighbor in the dorms, and we ended up being housemates for the next four years.

In the blink of an eye, we were out the door and headed back to Justin’s. By the time we got back it was, amazingly, closer to 12:30 AM. 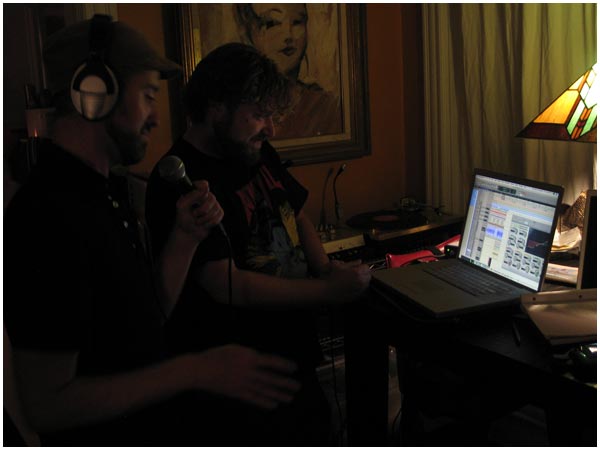 Dave, picking up where he left off. Because Kevin had a late flight scheduled (he had to grab a cab at 3AM to make a 5AM flight), the plan was for everyone to stay up. This was circa 2:00 AM I believe. 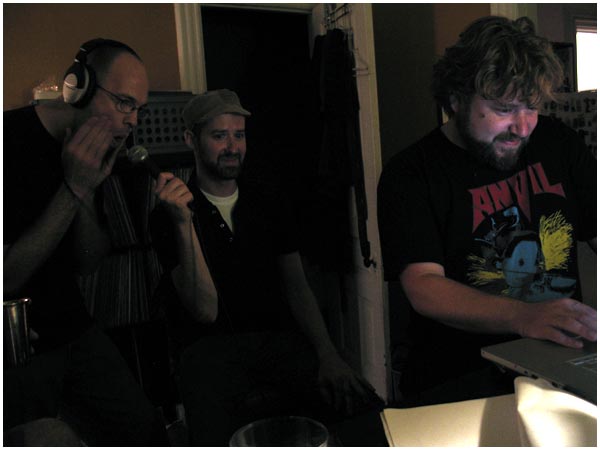 Jim, helping to lay down a track for the song. We entitled his layer “Cheeky Bongos.”

And finally, here’s the finished track, which Kevin was able to export out as an MP3 moments before bolting down the stairs to catch his cab.

After 3AM, everyone wound down and started crashing out. Justin, Jim and I ended up talking in the living room for another hour plus, sipping on scotch and remembering our college days.

As luck (?) would have it, Justin dug up an old cassette tape that had some incredibly embarassing crap on it. If memory serves, after a night booze and hash, we decided it would be a good idea to record ourselves reading poetry while playing bass riffs. Hearing our younger selves was… humbling, to say the least.

We all got a lot of laughs and cringes, listening to that tape. Later the next morning, Alex asked us What were you listening to? It was just awful.

For this first night, I was very glad to have folks from all over… and particularly glad my friend Jim was able to join. I’ve not been the best in terms of keeping in touch, but it warmed me to find that we were able to pick up on seeing one another, as though no time had passed at all.

Of course, how could I end this post and not share up the actual song that was created? Dear readers, for your consideration I give you Skin in the Game:

This song is licensed under a Creative Commons Attribution-Noncommercial 3.0 United States License.

« Repeating Ads Within the Tunnel at State/Jackson
Bachelor Party, Part 2: Indiana Dunes and Songs by the Campfire »