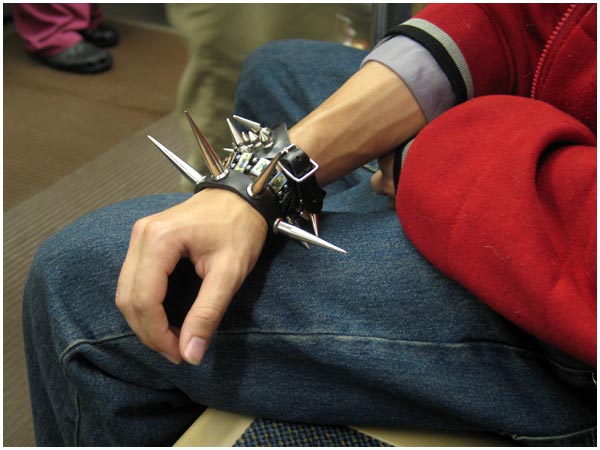 On the ride home, I was sitting near a guy who had on some pretty mean-looking spikes on his bracelet. After staring at them for a good while (I kept wondering if he ever accidentally jabbed himself), I decided to ask him a few questions.

I leaned in and tapped the guy on his shoulder. When he turned to me, I said “You mind if I ask you a kind of weird question?” Without missing a beat, he curled his index and middle finger quickly, twice, as if to say “Whaddya got?”

I asked him if the spikes on his bracelet were real, and whether he ever hurt himself. They were, indeed, solid metal (and not hollow), and he let me touch the spikes when I asked. Each spike was $5, and actually attaches to the leather bracelet via a small screw. Right before I talked with him, I noticed he was turning and tightening each spike unconsciously, as he was sitting.

I found out the guy’s name was Rubin, and he’s had this bracelet for a while. He said that when he first got the thing, he did accidentally hurt himself once, but has gotten used to it since then. The first time, he jabbed himself pretty hard with one of the spikes, but it never broke skin (it felt like a needle though).

I asked if people sometimes saw his bracelet, and then moved away from him. He said that happens sometimes, but also people see it and ask him questions. In fact lately, according to Rubin, more people seemed to talk with him versus moving away.

Girls, he said, seem to really like it. And oftentimes after talking with him, will ask if he’ll give it to them.

I asked if he ever got hassled by cops, and he said no. He imagined that if the spikes were any longer, he might. Rubin recounted one time where a female cop had handcuffed him (they were looking for someone else), and he told her to be careful not to hurt herself with his bracelet. But “she didn’t seem too bothered by it.” 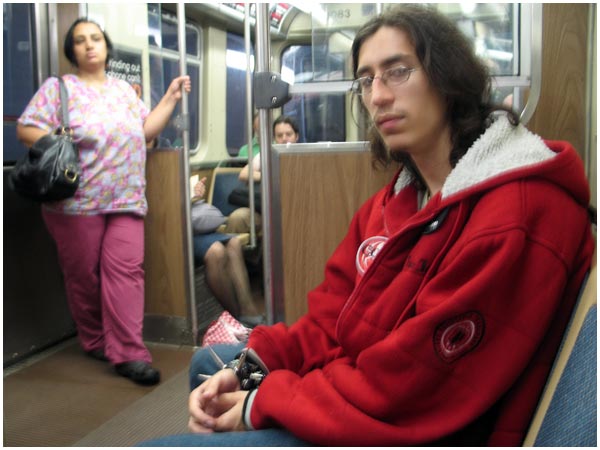 Blurry photo of Rubin. The train was rumbling along, and I wasn’t able to get a very clear shot. 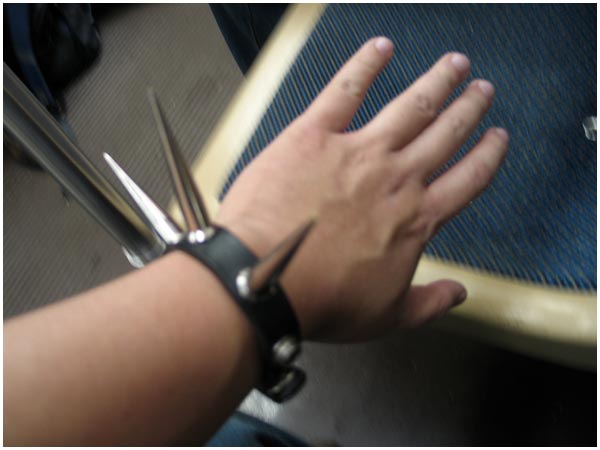 Blurry photo of me, with the spikes on. Rubin was kind enough to let me try the thing on. I just don’t think I’ve got what it takes to pull this off.

Here’s hoping those spikes are always for fashion, and never for self-defense. Thanks for the chat, and nice meeting you, Rubin!

I’m glad, after debating it a while, I finally leaned over and started talking. Every time I shake off my introverted tendencies and get a little more extroverted, the outcomes have always been positive.

Related:
Always Ask
On the Merits of Curiosity and Being a Little Extroverted
Bottled Water Trucks in Winter: Do the Bottles Freeze?
Panaderia La Central

« Arby’s and an Artificial Snowman
Tricia and Liz, Wedding Prep »