Liz and I got back into town on Friday, and have spent most of the weekend settling back in to our apartment. On walking in, it felt very odd. It’s “home” again, but I’m still getting used to all the things that used to be so routine.

I’m getting more accustomed to using American money (which is so not pretty, compared to the currecny of other countries). I’m getting used to not saying “grazie” instead of “thank you.” And I have to consciously stop myself from saying “permesso” whenever I mean to say “excuse me,” as I’m walking by someone.

It’s also a bit weird to return to the blog once more. I’ve had the longest non-blogging spell… well, ever. And it felt pretty good, actually. I missed it a bit, the first few days. But then I never really gave it much thought after that.

I’ve got a gazillion images from our trip (to say nothing of the photos from our wedding). I’ve gotten them all copied over to my computer, but haven’t really been able to review them yet. Not even sure what I’m going to do with all this, as it seems way too daunting to get it all up here on the blog.

For now, here are two pics from the time we spent in Florence, Italy. Our hotel had a small tower at the top, and we visited a few times during our stay. Close to the end of our stay there, we decided to go up, get a glass of wine, and watch the sun set: 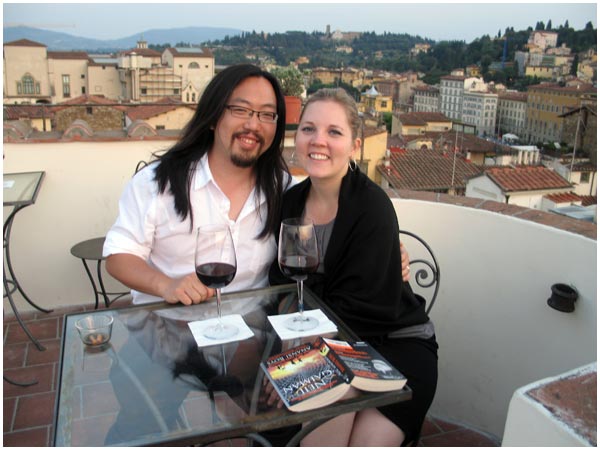 Me and Liz, doing a little reading up on the rooftop. 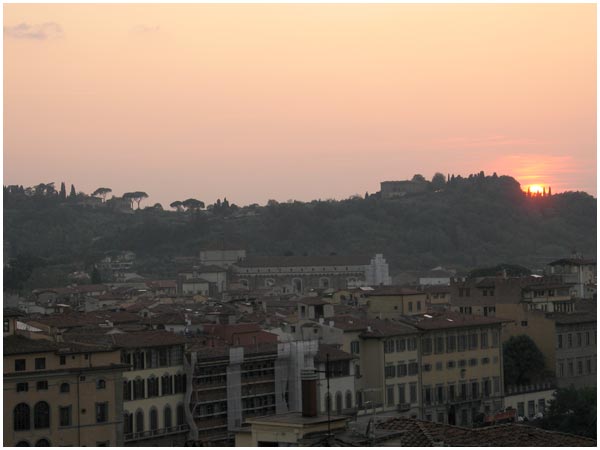 The sun setting in Florence. It’s much more beautiful than this photo conveys. Try to imagine lots of church bells in the background, tolling slowly.

It was a magical two weeks. And much like the wedding, it happened must faster than we realized. I’m still between worlds at the moment – one foot still overseas, another foot happy to be back home.

My jet lag has mostly passed over and it’s now close to 7:20 AM. The real world beckons. I need to hop in the shower soon, and catch the Blue Line in to work. New day.