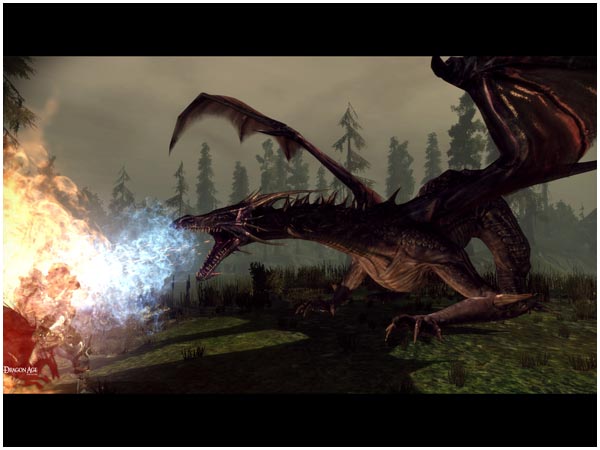 During this last week, I’ve spent a great deal of time playing Dragon Age: Origins. I’ve played a few games here and there since I’ve purchased my PS3, but this game has me playing for hours and hours at a time.

I’m a sucker for RPG games. Throw in some dungeon maps, and I can play that stuff all day (and literally did so, in fact). Though she got this for me for Christmas, I think Liz is now regretting getting me the game.

Overall, the span of the game is quite stunning. Sweeping, in fact. I’ve only gotten through maybe 25% of the game so far, and it’s a multilayered storyline, with so many different characters and plotlines. I’ve heard it described as a combination of World of Warcraft and Fallout 3, which I think is apt.

In every conversation, there are a multitude of replies that your character has available. And while I’m used to games more or less shuttling you towards a particular storyline, I was honestly surprised at just how much my character’s replies would govern the conversation, and the storyline overall. I shudder to think at how much work went into mapping out all the audio and dialogue.

Consequently, decisions that your character makes in the game end up influencing the other party members. If you do something that goes against what one of your other teammates think should be done, their approval drops. And in some cases, they come right out and tell you how they feel. Little touches like this help make the storyline seem a little less linear, and a little more free form.

One of the harder things for me to contend with was the character “Tactics.” You can set rules/macros for each of your other party members, for them to react based on different scenarios: heal yourself if you’re below 25% health, switch to a ranged weapon if enemies are at a distance, etc.

For a while there, I had to switch the game to “Easy” mode, as my party members were constantly dying. After adjusting the Tactics a bit, I was able to get back into “Normal” difficulty mode. I didn’t see a ton of guidance within the game itself on this, and the only gripe I’ve got is that I ended up having to spend a lot of time tinkering with these “Tactic” settings.

That said, an annoyance to me is likely a boon to someone else who likes that degree of control. Like the dialogue and characters within Dragon Age, the item management and fighting options are equally rich/complex.

The trailer below is a promotional one, and honestly… the gameplay itself looks *nothing* like the trailer. But I’m including it because it just looks pretty sweet. The regular gameplay isn’t quite at this level, but it gives you a sense of how much money is behind this franchise.

One thing I’ll mention: the game is bloody. Even from the opening logo animation (which I think is spectacular, in the way it morphs from the dragon icon into the EA icon), this game seems to want to own the blood-spatter look. And it does a pretty great job of that, throughout.

Videogames, nowadays. I’m always blown away at how good game trailers are getting. Looking at the one for Dragon Age, I’m tempted to say they should just make a feature length movie using the CGI and call it a day.

Overall, the storyline and gameplay of Dragon Age are a dream come true for people (like me) who are into RPGs. The quests are multi-tiered, often containing side-quests that require you to branch off two or three times. The decision-making process is given a little more weight, as both the plot and your party members will react according to your choices.

I’ve gotten lost in the game, and it’s easy to see why – this is literally a whole other world, with lots to explore. For me, it’s a bit like playing World of Warcraft again, as the scenery definitely reminds me of some aspects of WoW. But the plus side is that it’s a single-player game, and that it’s finite. There is a clear beginning and end. Although I think that end is still a long ways away for me. This game is pretty massive.