Finding Out Liz and I Look Happy 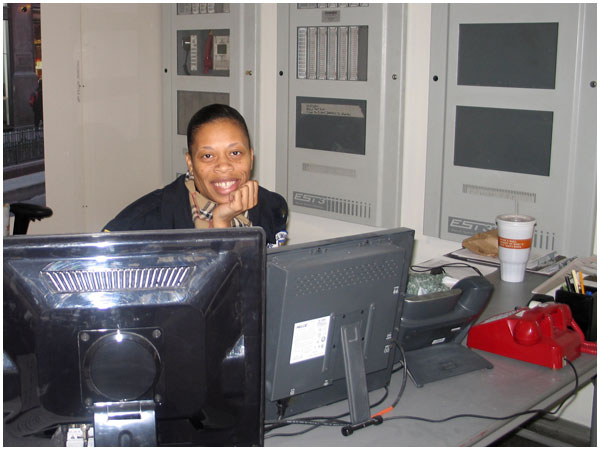 This is T, who is stationed at the front security desk in the building where I work. She’s always very cheerful whenever I see her, and tends to greet nearly everyone as they walk in, in the AM.

Yesterday, as I walked in… she mentioned to me that she loves seeing me and Liz. The two of us ride the El together, and when we get to the front of my building, we usually kiss and say goodbye to one another. Since Liz works nearby at DePaul, we get to do our morning commute together, which is nice.

Given the vantage point of the front security desk, and the windows that face out to the street… T’s been viewing our little morning ritual for over a year now. As she mentioned this to me, I started smiling uncontrollably. She told me that she could tell we were happy because I kissed Liz twice today (which was true).

She also told me that she’s only ever seen me look upset two, maybe three times in the past. The way she described it, the look I had on my face suggested that we “went to bed upset, woke up upset, and we’d be talking more after work.” On hearing that, I asked for clarification. Only two or three times within a year? Overall, that didn’t seem too bad a track record.

So… there you have it folks: independent third party verification that my wife and I are doing pretty swell. It was delightful to see my own life through the eyes of someone else, and fun to hear T describe my morning routine.

It was an interesting and singular experience, being told by someone you don’t know that you look happy. On top of that, finding out that you’ve been making this person you don’t know happy? It’s also a pretty cool feeling.

I’m sure that, with working the front security desk in downtown Chicago, T gets to watch and observe a great number of people each day. I’m positive she’s got some pretty interesting stories to tell. And as of yesterday, I’m proud to count myself among those stories and to know it’s a happy one.