Walking with Dinosaurs: “Making Of” Documentary and Live Show

Over the weekend, I happened to be watching PBS and caught a pretty amazing documentary about Walking with Dinosaurs, a BBC series that first aired about 10 years ago. The six-part documentary used a lot of computer generated graphics, combined with animatronics. The series was intended to be like the movie Jurassic Park, but presented as a nature documentary… and was very popular.

The documentary I saw focused on the live arena show. A team of engineers and artists spent twelve months creating actually, life-size, working dinosaurs – with the intent of taking them on a multi-date tour.

It’s a poor quality video, but hopefully gives you a sense of what the documentary was all about. Though I wasn’t able to embed the video here on my site, the full documentary I saw is actually available online. It’s entitled “The Making of Walking With Dinosaurs – The Arena Spectacular” and is available for viewing in full. It’s 45 minutes total, but a really fascinating video. 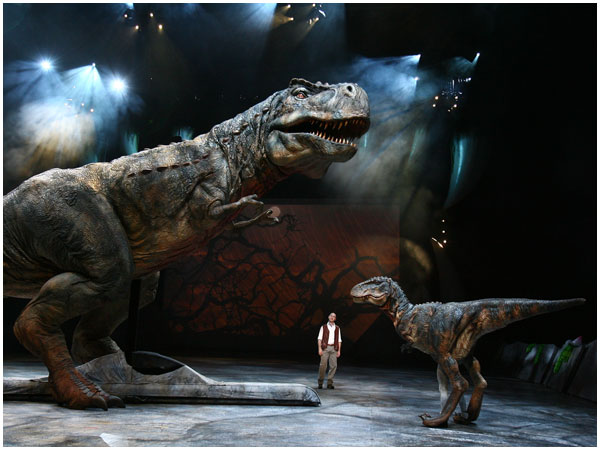 Here’s an image from the live show, featuring the narrator as a size reference. Underneath the T-Rex, there’s a long, rectangular base that moves it about – it’s blended in to look like the scenery/floor. On the right, the smaller dinosaur is actually moved about by a real person (you can see their legs if you look closely).

The show is slated to be here in Chicago, in late July. The images and the sheer size of the dinosaurs were really impressive to me on the TV. I can only imagine they’d be more so live, in person. I’m debating buying tickets to go see this thing.