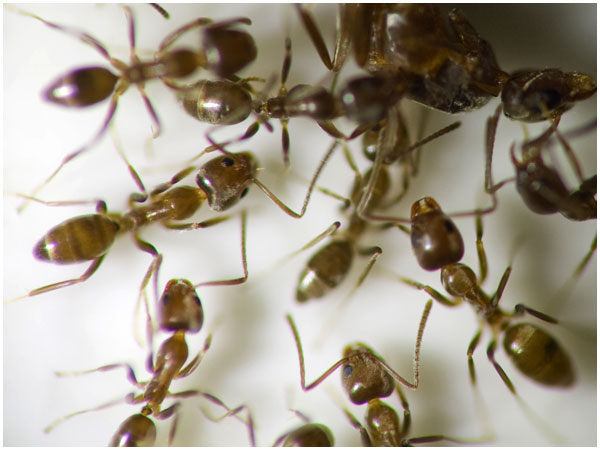 In his Esquire article Invasion, Tom Junod writers a harrowing account of how Argentine ants invaded (and infested) his home. I’m a fan of ants, and am really awed at how they work as a collective. That said, there were still some cringe-worthy moments that had me shaking my head in disbelief.

The sheer number of ants in general, compared to humans, is a little staggering: roughly 1.6 million ants for every single human being. By Junod’s estimate, given the number of people in his family… his house contained about 4.8 million ants.

But, hell, I’m sure I counted 4.8 million just on my daughter’s swing set, which we had to dispense with in part because its steel tubes regularly poured forth ants and ant larvae like sand, and my daughter finally freaked out. I’m sure I counted something close to 4.8 million the day I turned over my canoe and figured that its bottom was filled with wet leaves, until those leaves started to vibrate en masse, started to move.

As the article progresses, Junod details the various approaches his family takes to combatting the ants. His daughter squashes them, his wife goes on early morning Windex-fueled killing raids. He even tries to co-exist with the ants for a time, trying to keep them contained to certain areas.

There are bad ant stories throughout the piece: ants in his underwear (discovered after he put them on), ants in his wine, ants hidden in the ashes of the Weber grill. Junod is a really good writer, and it’s difficult to not just start quoting paragraphs and paragraphs here. Invasion is really well written – you should give it a read.

Ants are terrible. Ants are amazing.

Related:
Watching a Swarm of Migrating Ants
The Ants, by André Mauroi
Ants

compelling read
« The Triumph of the Crayolatariat: Thoughts on the Crayola Factory Tour, Nostalgia, and Simulacra
I :heart: Working Out »