Russ and Liam: Twelvestone in Chicago

Twelvestone is a forum I’ve been visiting for a long while now. It sprung up after the very popular were-here.com Flash site went down – a sort of refuge for folks who were left with nowhere to gather (Flashkit wasn’t viewed as an alternative).

Since that time, I’ve participated in online discussions, watched flame wars come and go, and know the intimate details of a lot of folks I’ve never met in person. I’ve watched people graduate, get married, have kids… and in turn, have watched some of those kids grow up to be toddlers.

Last week, I saw a post that Russ (baron rushtoff) would be in town. We made some plans to meet up, and last night we hung out at the Hyatt, where he was staying. Liam (aka rogue_designer), also from WH and Twelvestone, joined up with us as well.

Funny thing – Russ is interviewing at IBM, and one of the folks that will be part of the interview process is Jeff (aka persist). Like the rest of us, the two knew one another from Twelvestone… but hadn’t yet met in person. Jeff decided not to join us tonight, which was a bummer but makes a bit of sense. 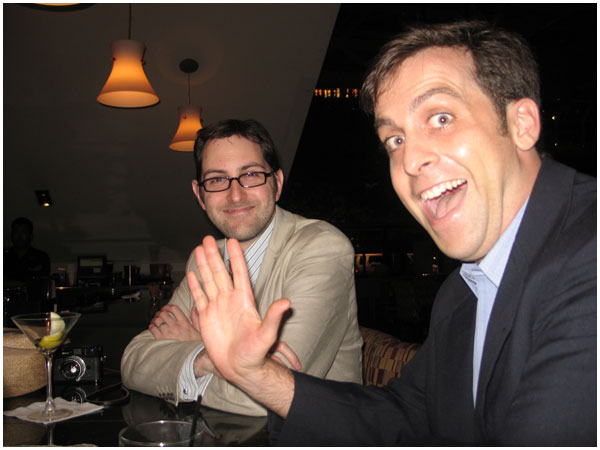 The three of us chatted about a wide range of things – language, science fiction, typography. And of course, as usually happens with these sorts of gatherings, we talked about some of the other people we “knew” from online – the ones we’ve met, and the ones we know but haven’t met yet.

Russ said that most of the folks he met were pretty much exactly what he expected, based on their online personas. And from the few I’ve met, I think that holds true.

As I’m writing this, I think that Russ is currently doing his interview with Jeff. Russ’ plane was late coming in, and he said the interview began at 7:30AM. We all called it an early night, and said our goodbye around 9:30PM. Outside, I chatted with Liam for a while (who’s expecting a baby in about 7 weeks). We’ve met up multiple times before, and it’s always fun to see him again during these rare Chicago meet-ups.

It’s amazing to me that over ten years ago, I picked up a copy of Flash so that I could animate my poetry. From there, I got more and more interested in computers and eventually found myself working with Flash full-time. In that decade, I’ve met a ton of incredibly smart, funny, brilliant people – many of them online, and a few in person. Extending our talk about SF and the future… I wonder where we’ll end up being, in another ten years.