On Friday, I was proud to be one of the folks invited to participate in 20×2, a presentation format where 20 people are all asked to answer the same question. The catch? Each person only has 2 minutes on stage.

En route to Martyrs’, right around Logan and Western, we realized we had a flat tire. We ended up ditching the car on Western, about half a block South of Elston. There, on the streetcorner, we waved at cabs for about 20 minutes… and the whole time, I was stressing out.

Luckily, we finally found a cab and were able to make it to the bar with about 20 minutes to spare. Whew.

Once inside, I met up with Andrew Huff, who was the person kind enough to recommend me to the organizers. I also met Jeff, who gave me a quick rundown of the night and some instructions for when I would take the stage. 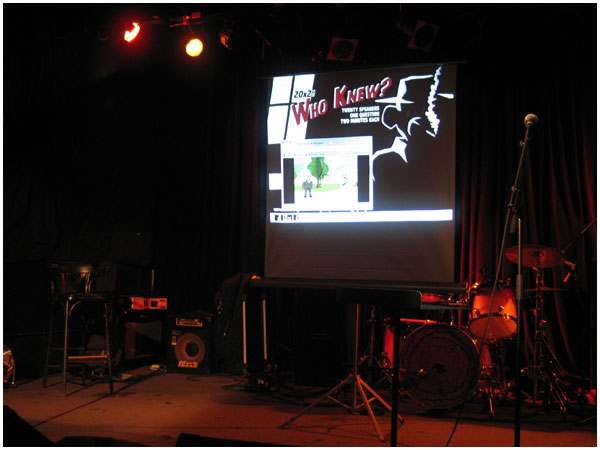 We got a table right near the front of the stage. On seeing the projection screen, I got a little worried (my presentation was a video, and it had captions). When the time came though, it wasn’t an issue. 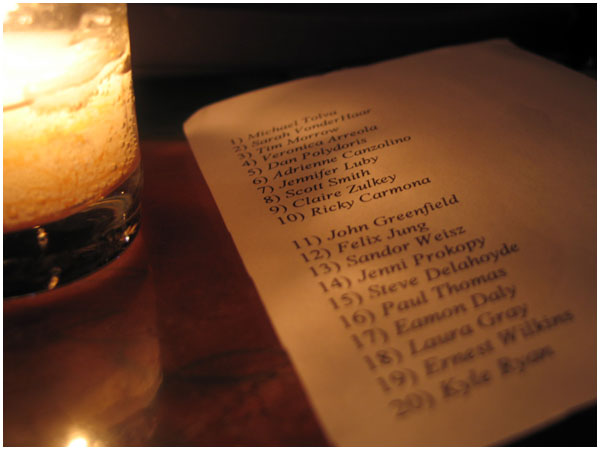 It was pretty dark in the bar, during the event. Here’s a candle-lit list of the presenters (I went on shortly after the intermission). 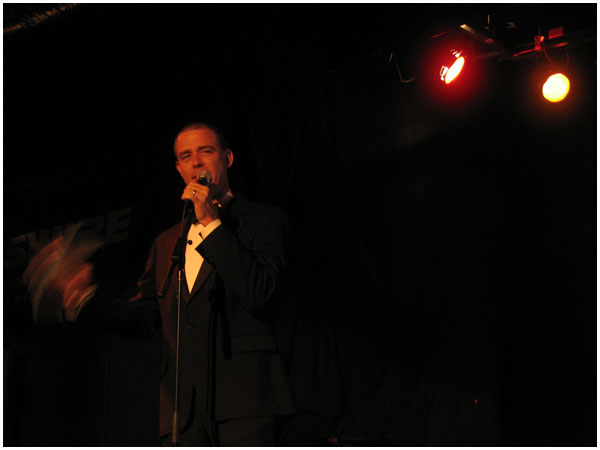 Mike, the emcee for the evening. He had some good banter, and was very smooth on stage. He made sure the evening ran smoothly, transitioning between one speaker and the next. 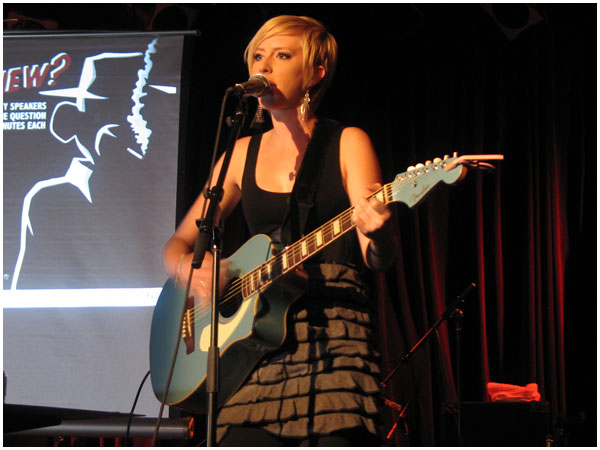 Sarah VonderHaar, former America’s Top Fashion Model contestant, model, and musician. She wrote a song about blondes, which had a rather catchy refrain (it was a key change, as she sang I’m not the sharpest tool in the shed…). I’ve had it rattling around in my head since Friday.

Jennifer Luby also made a video for her answer to the prompt. Check out a more detailed walkthrough on her site.

Scott Smith followed, and though I don’t have any photos of him… you can look over a recap of his talk over at his website. 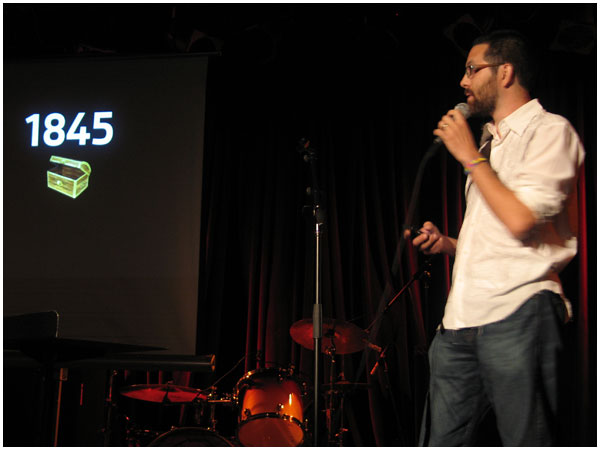 Sandor Weisz, who did a great presentation on a (possible) hidden treasure, whose secrets were locked inside a code that hadn’t been broken in over 100 years. I’m looking forward to finding a transcript or video of his piece, as it was one of my favorites of the evening. 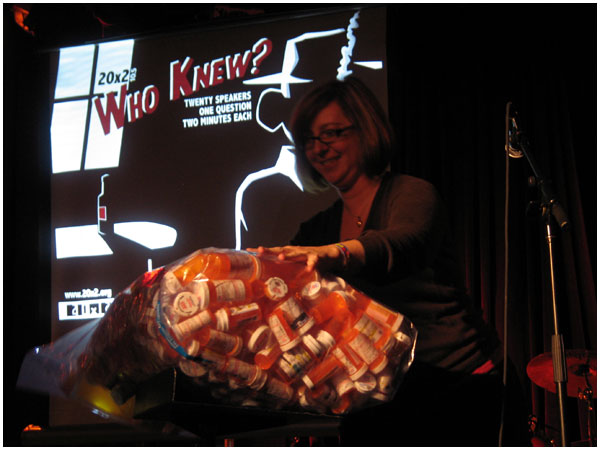 Jenni Prokopy, who runs ChronicBabe.com, talking about her fibromyalgia and having an invisible illness. She brought with her a very impressive, eye-opening prop! 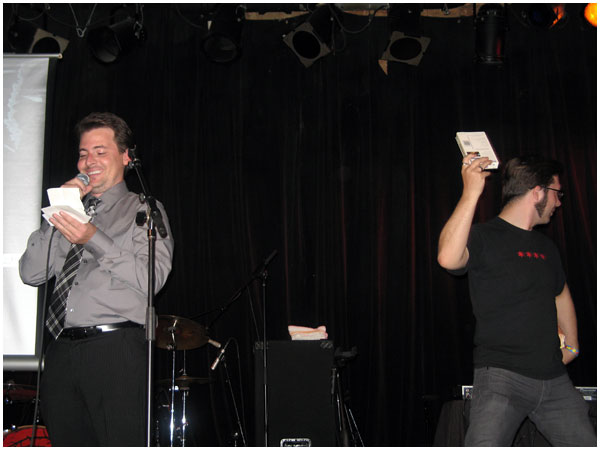 Some prizes that were given away during the show. The audience was asked to participate in coming up with a creative answer to the question: “What’s the worst nickname for Chicago.” I think a few winning answers were “Hidden Detroit” and “America’s Tom Selleck Moustache.”

Jeff is laughing on the left, and that’s Andrew on the right, holding up a copy of “How to Use the Internet.” 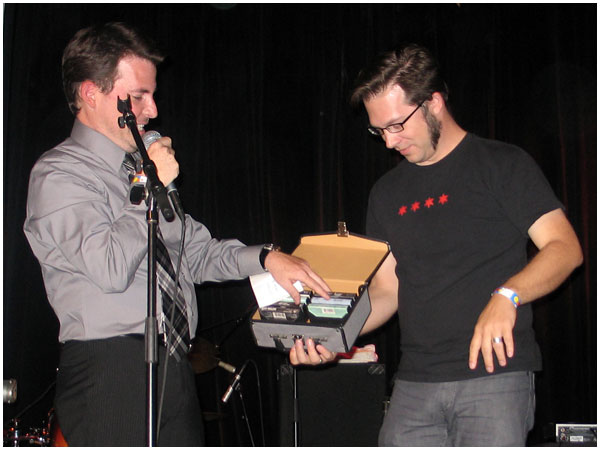 Another awesome gift/find: a small lunchbox container that held up to 10 cassette tapes. Fitting, since Andrew was also a contributor to Jason’s Cassette From My Ex book. 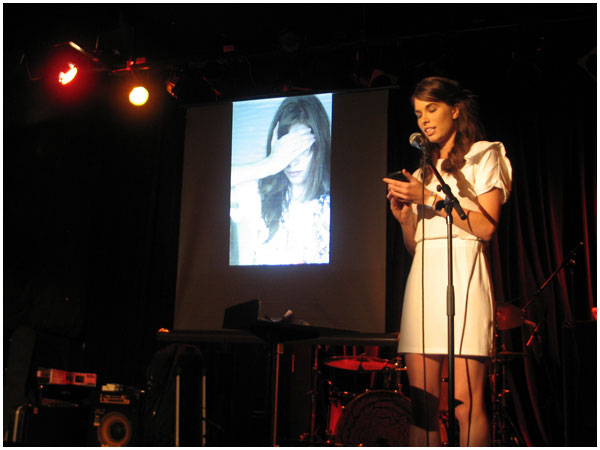 Laura Gray, who provided some pretty hilarious reasons why she sucks at the game Catch Phrase. 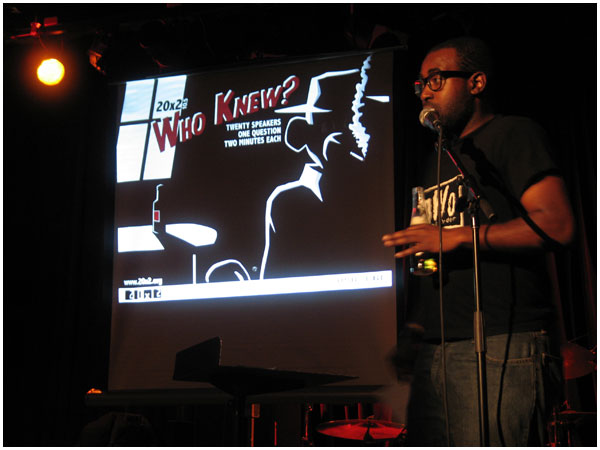 Ernest Wilkins, who gave a very funny and fast-paced talk (laced with all sorts of pop culture references). Another presentation I’m hoping to find a transcript/video for.

One presentation I didn’t get photos for was the one by Ricky Carmona, who spoke (and sang) passionately about music. Specifically, Cee Lo’s Fuck You. He absolutely brought the house down with his enthusiasm and presence.

For my presentation, I ended up doing a video. I searched for the phrase “who knew” on Twitter, and gave myself a few rules: no replies, no retweets, no links or images. It all had to be just plain text.

From there, I searched on Flickr for a corresponding image. My rules there were that I could only use words found in the tweet… and each image had to be a Creative Commons licsensed photo.

I searched literally hundreds of tweets, over the span of maybe 2 or 3 weeks… and from there, spent a lot more time searching Flickr. More than anything else, I was working with bookmarks WAY more than I ever had in my life. I ended up with maybe three times the number of slides I could fit into my two minutes.

Here’s what I found:

The song I used in the video is PercusienFa, by Erik Mongrain. If you liked the sound of it, check out him performing the piece live. While he plays guitar normally, he performs this song in a rather unique way…

For additional photos of the evening, check out this great Flickr set from jima. Huge thanks again to Andrew, for the chance to take the stage with such talented folks. Really glad for the opportunity, and this was an incredible amount of fun!