The big day is finally here! After nearly two months, all five Finalists in the Month at the Museum contest met up for the first time at MSI, and got to hang out together as a group. We gathered near the front desk area, and holed up a while at some tables near the escalator.

Krispijn was a little late showing up, and everyone there joked a little with me… asking what I had done to him, after we met up. Heh.

Once we were all together, we slowly made our way to some meeting rooms, where we had a nice, catered breakfast. 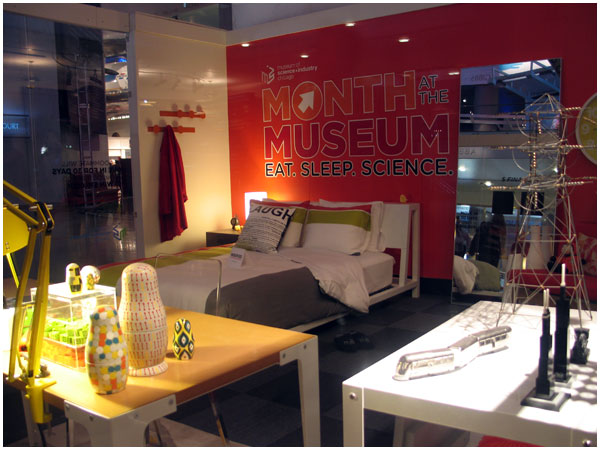 On our way up, we passed by the fabled glass box. Everyone took a little moment to peer inside, and to check out the arrangements. 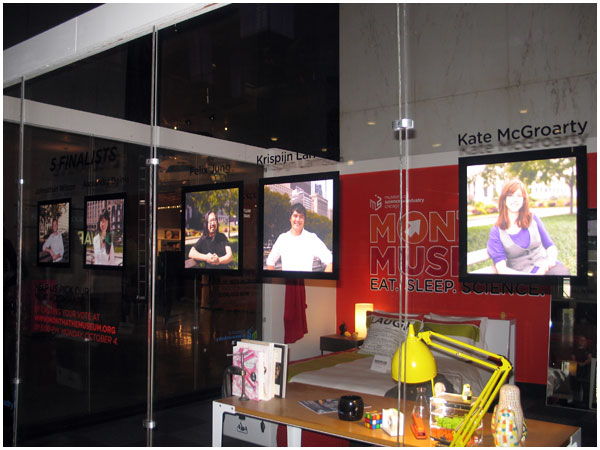 And hey, our photos were up on the wall too! 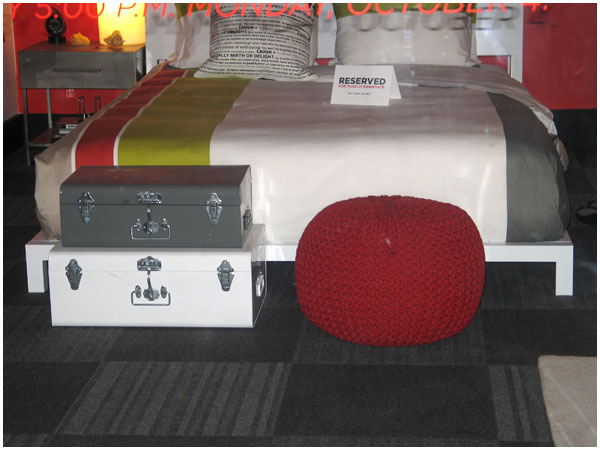 This one’s for Jane, who I know really loves that cushy pillow thing on the right. 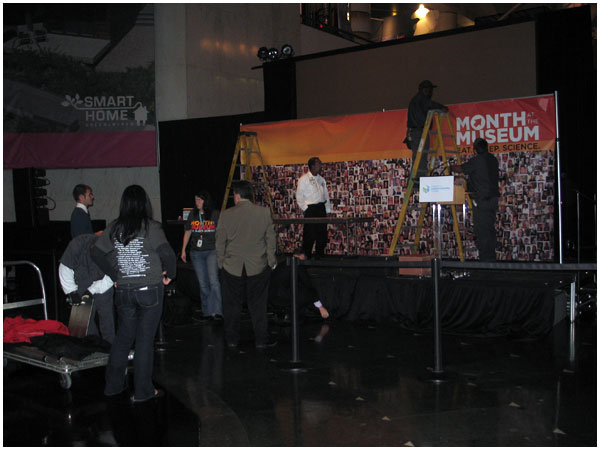 In the Rotunda, folks setting up the stage for the big press event. 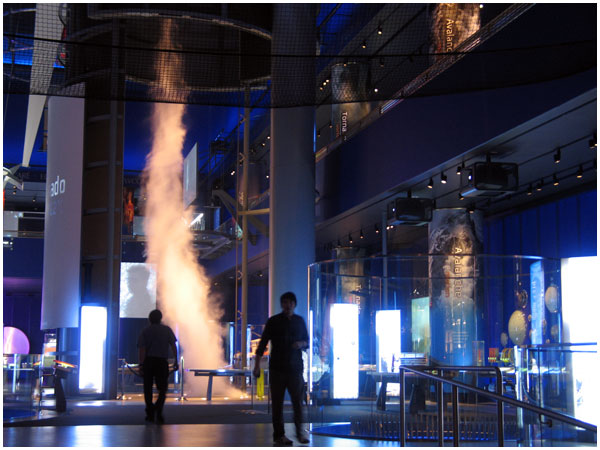 Both Krispijn and I saw the tornado vortex display, and immediately started walking towards it. Our group was being led in a different direction, and we had to get called back. 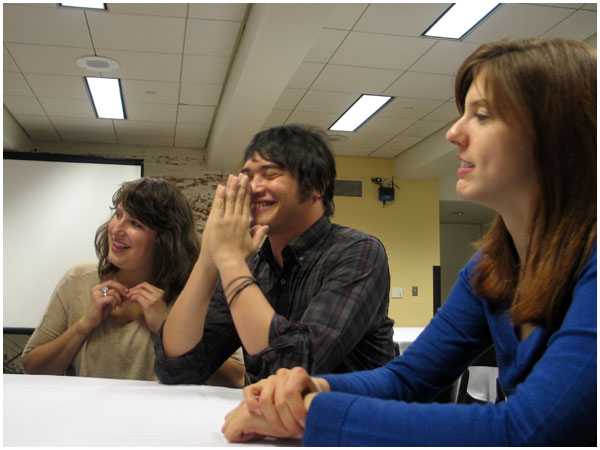 In the meeting room, we all hung out, ate, and joked with one another. We hit a range of topics, including Star Wars, puns, and bacon. L to R it’s Christa, Krispijn and Kate. To the right (who I didn’t get a photo of) was Kate’s roommate Corrine Mucha, who I met just a few days earlier, at the 3rd Coast Short Docs Challenge.

Meeting Kate in person for the first time, I could see how well her energy from her video carried over in real life. She was very upbeat, and always smiling and laughing. I could tell how good she would be with crowds and with people, just from watching her interact with others. 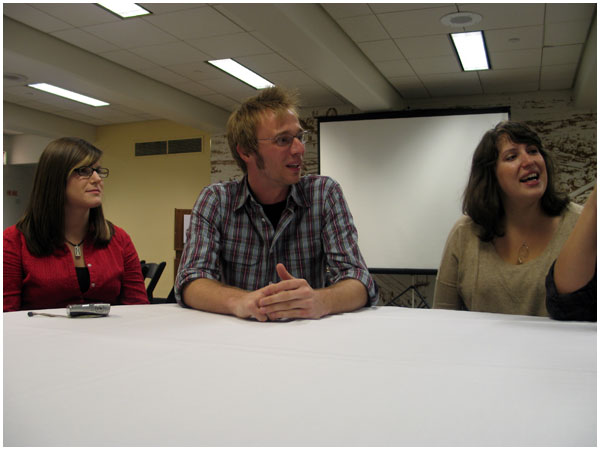 L to R it’s Adreanna, Johnathan and Christa. After being at the table with Johnathan for a little while, I was struck by how quickly his responses were to others. He kept a conversation going easily, and his rapidfire responses were oftentimes really funny. Like Kate, I imagined him doing really well on camera, during interviews, etc.

Although… I did find out later that he used the word awesome maybe four times during one interview. 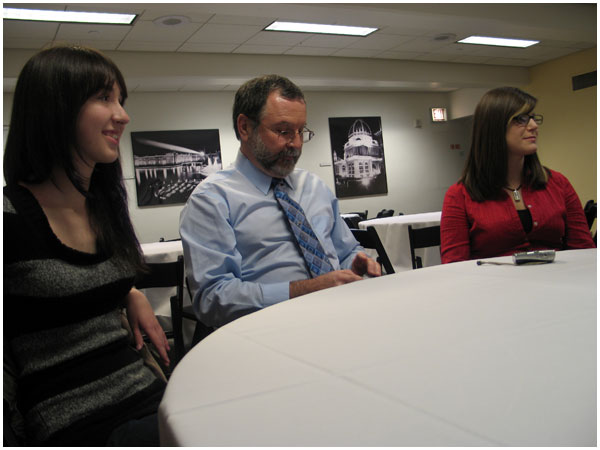 L to R it’s Alex (whose last name is spelled Dainis, people), Alex’s dad, and Avey. It was nice to meet Alex in person, and she was by far the one candidate who had the best background in science… of all of us. She was, like me, a little reserved in conversation… but would throw out some good zingers from time to time.

After meeting everyone, it was very clear to me that any of us five could be the person who was picked. In talking with everyone, and getting to know them a little better… there was no way one of us was “better” than another. Each person had different strengths and areas of experience, but everyone shared a very similar mindset. It sounds weird, but we were all incredibly alike, despite our differences. 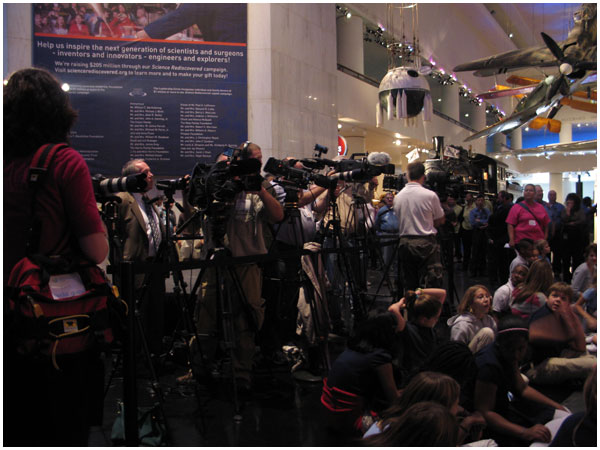 I wasn’t allowed to have my camera on me, and went so far as to leave my phone with Liz. Thanks to her, she got some photos and videos of the actual press event… and the big reveal. It wasn’t until after the whole event was over that I saw Justin had trekked down to watch the show, and to cheer me on in the crowd.

The Rotunda was packed with a combination of news crews and schoolkids on a field trip. On walking up and seeing the throng of people, all the Finalists looked at one another and were a little awed. 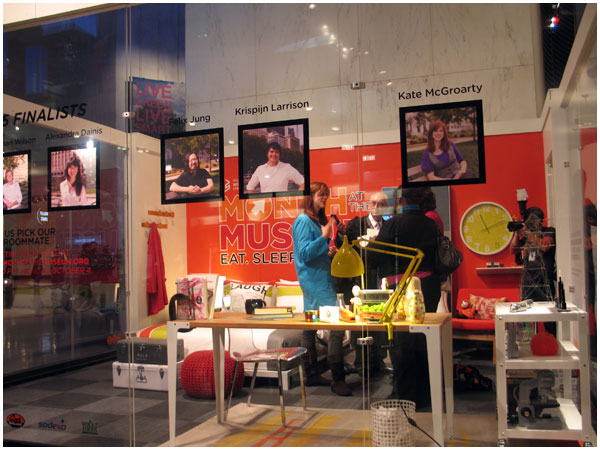 Kate, the winner of the Month at the Museum, inside the cube and getting interviewed. The other Finalists were gathered outside, where we each got to do an interview with the local station.

Though four of us didn’t win, we did get a nice gift back chock full of some great stuff. There were over $200 in gift certif
icates, along with a t-shirt, a Rubik’s Cube, some Astronaut Ice Cream (score!), and a whole bunch of other stuff I haven’t had the chance to look through yet (the bag was incredibly heavy).

Oh, and we all got to keep our lab coats. Everyone that is, except Johnathan. There was a little confusion over the lab coats, as one person was asking me to return it and someone else told me I could keep it. We all got to keep ours, but I think Johnathan ended up having to return his. I hope he’s able to get another from the Museum, as a souvenir.

Everyone opted to stick around and explore the museum a bit, and we were all given complimentary tickets to any exhibit we wanted to see. I have tons of photos and video from my exploration of the museum… but that’ll have to wait for a later time. Suffice it to say, I definitely want to return… because there’s no way we saw everything. Not by a longshot.

After a while, all of the Finalists parted ways… but not before arranging to meet up later in the evening, for drinks. Everyone exchanged phone numbers, and we all wandered off in different directions. If it’s any indication as to the size of the Museum of Science and Industry… we didn’t see any of the other Finalists the rest of the time we were there.

The past two months have been… incredible. Excruciating at points, where I couldn’t say anything and moments where I couldn’t stop thinking about the contest. But I have to say, I’m really proud to have made it as far as I did in the competition. And being 5 of 1,500 is a pretty great accomplishment.

I’m bummed I didn’t win, but after seeing the museum again for the first time in ages… I think everyone will be surprised to see all the museum has to offer. I know I was pretty awed looking around, and though I was a bit sad I couldn’t live inside the exhibits, they were still a blast to visit and experience. If you’re in the Chicago area, or live within a few hours’ drive (my folks used to take us up from Indianapolis, as kids)… definitely consider stopping in at MSI.

For those interested in seeing what lies in store for Kate, when she begins her residency on October 20th… check back at monthatthemuseum.org. You can also follow her on Twitter (@msikate).

Thanks again to all my family and friends, for the support, the retweets, for sharing links on Facebook… it felt really good to know so many people were rooting for me. Swing and a miss, but so it goes.

I have a favorite quotation from author Jeanette Winterson, from her novel The Passion. It goes like this:

I had a really good time participating in Month at the Museum, got to meet some incredibly creative and great people, and had quite a few singular experiences along the way. Thanks to all the awesome people at the Museum of Science and Industry, for letting me have the chance to play along.

PS: If anyone out there knows of other blogging-related contests, I’m all ears. This was a lot of fun.

month at the museumMSI
« Breakfast at MSI
Month at the Museum: Post-Contest Drinks at Villains »