We woke to the sound of Isabelle pushing on our bedroom door, asking if we were awake yet. The kids were up and ready to open gifts, and Liz and I were the last ones still in bed. 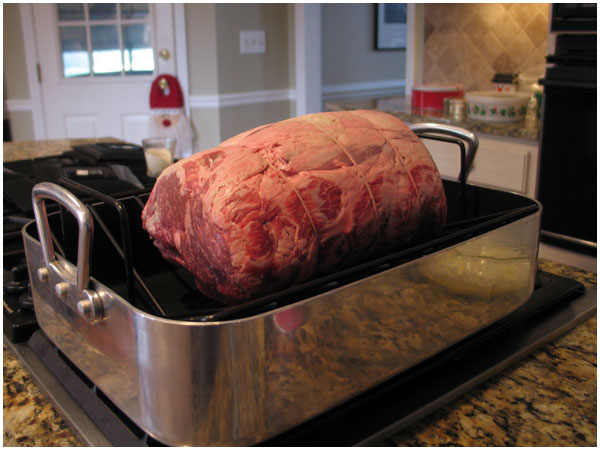 On walking downstairs to the kitchen, I saw the main course for our lunch resting on the countertop. 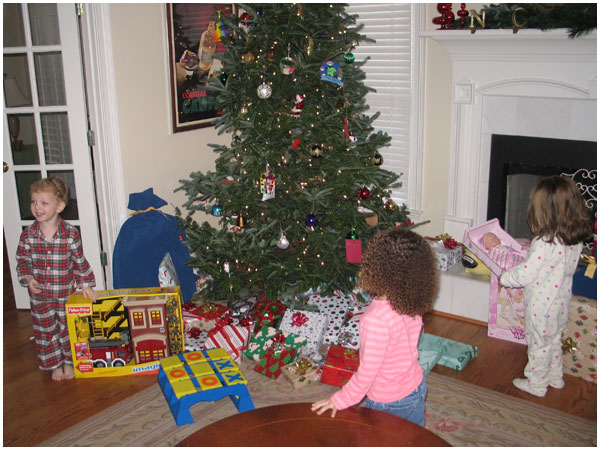 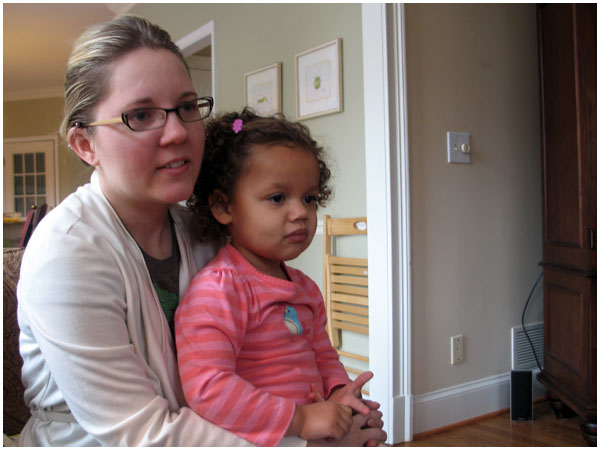 Liz and Audrey watch while gifts are being opened. 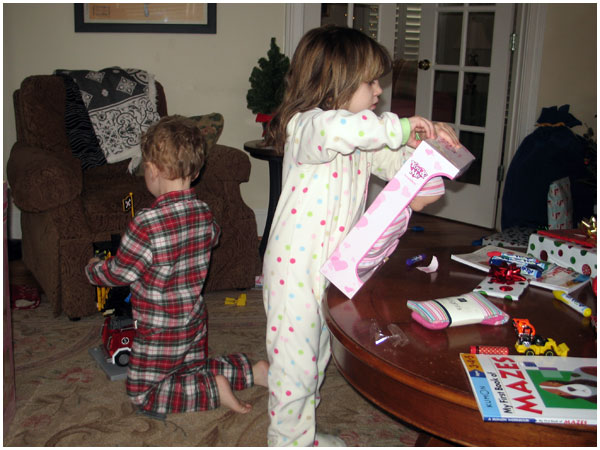 Jackson and Isabelle, still in their PJs. 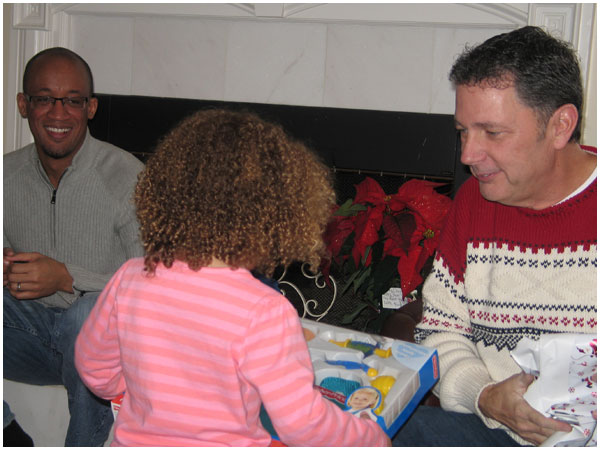 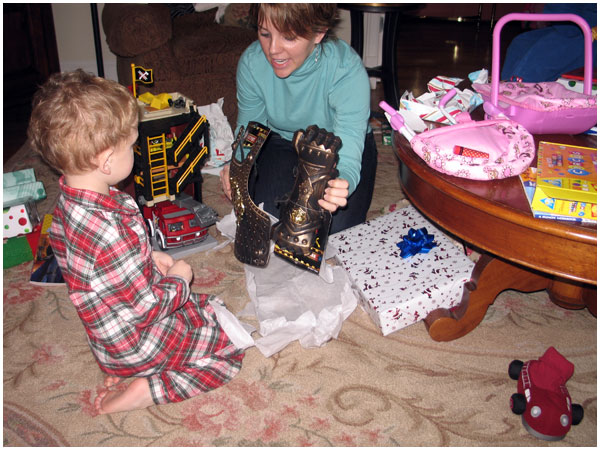 Tricia shows Jackson the armor he got as a gift. He was a little wary at first, and didn’t want to put it on. 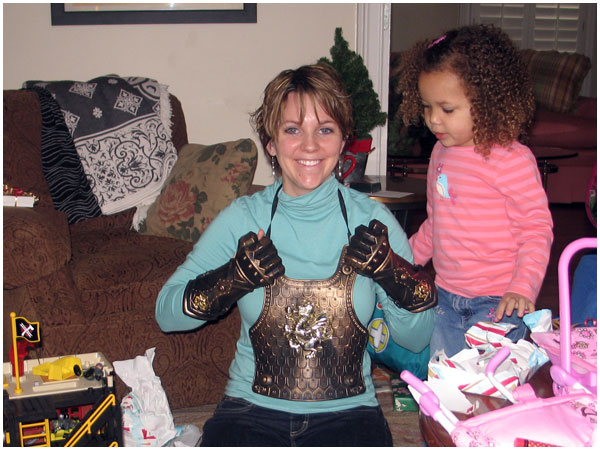 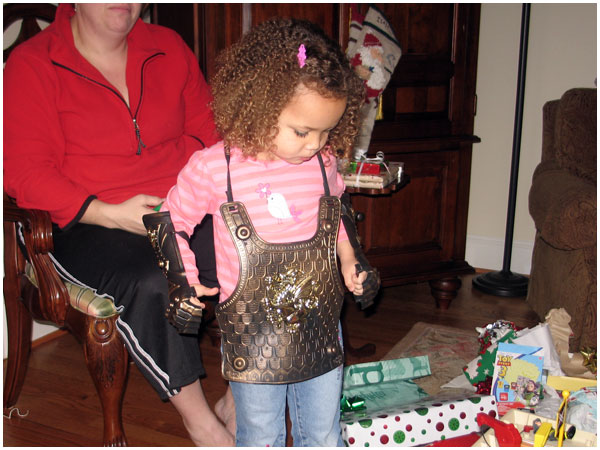 Excited, Paige decided to try it on too. A few hours later (after all the gift craziness subsided), Jackson eventually did get interested and try on the armor. 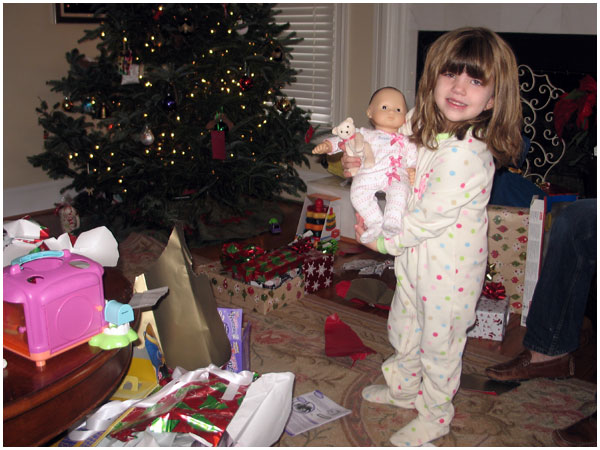 Isabelle with her baby doll (who, incidentally, also has a baby teddy bear). 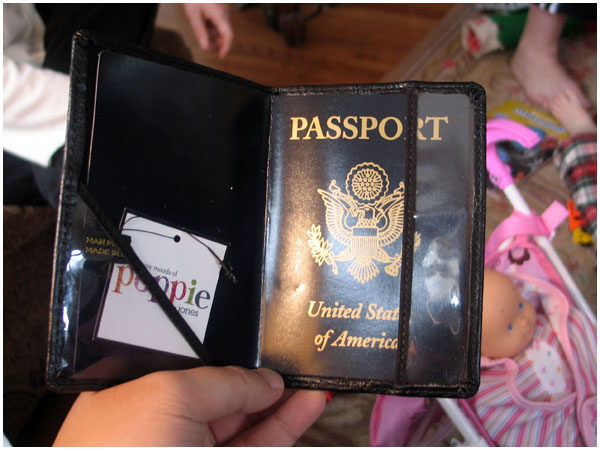 This was a confusing gift from Kirt and Anne. Liz got the same sort of thing. 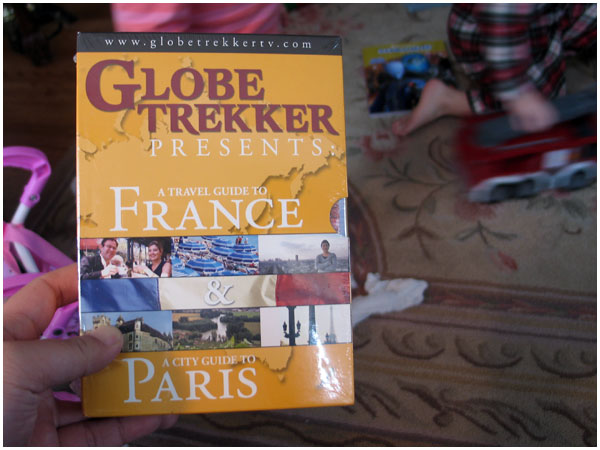 After opening this up, we learned that our gift was a FAMILY TRIP TO FRANCE. Part of the gifts this year to the adults were centered on spending more time with family. Tricia and Darryl got a Disney Cruise, and will be travelling with the Holders. Liz and I are to travel to France with the Holders, exploring a new country together.

Anne speaks French very well, which is a huge plus. I was able to guidebook my way around the language (I tried to speak whenever I could), but having someone more fluent than me will be nice. We went to Paris for our honeymoon, so the opportunity to go back is going to be pretty amazing. 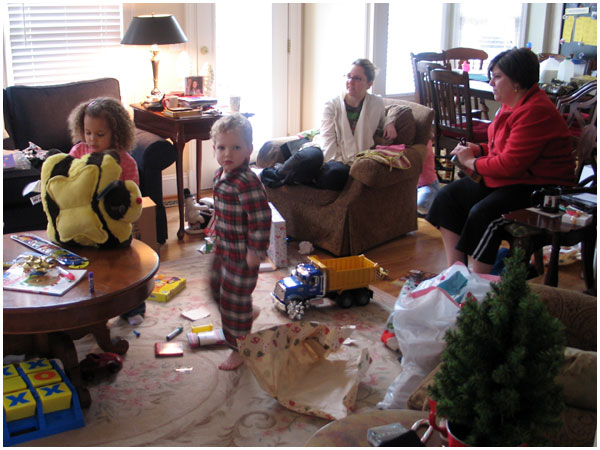 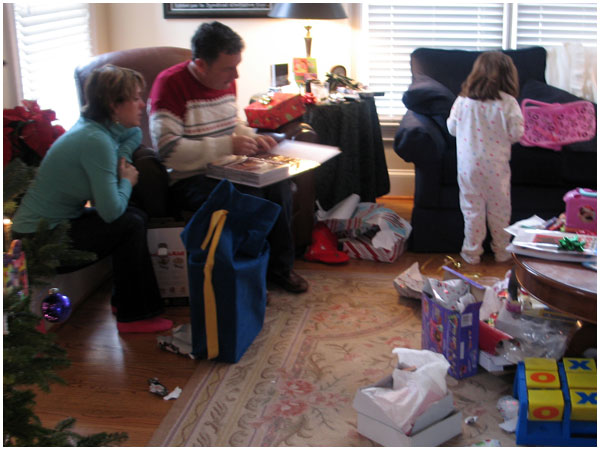 L to R: Tricia, Kirt and Isabelle. Tricia’s gift was a HUGE photo album, with tons of old family photos. I got the chance to peruse through it, and it’s an amazing collection. She scanned many of the photos and built the whole thing photo by photo. It literally brought tears to the eyes. 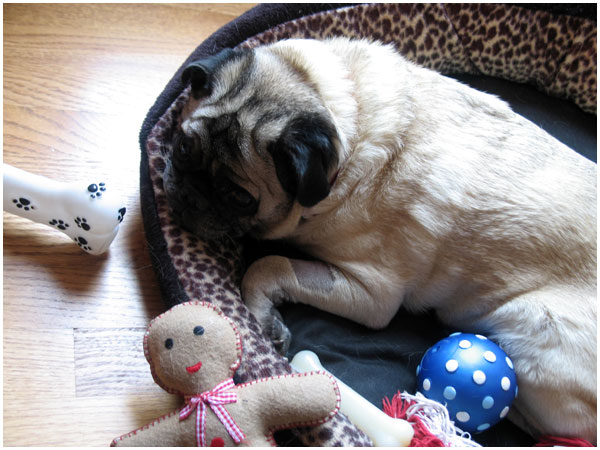 Napoleon, chilling by the couch. You may notice a small patch of fur on his left leg. Napoleon’s had some troubles lately, and after a emergency trip to the vet… was diagnosed with Diabetes. He now gets two shots a day, poor guy. 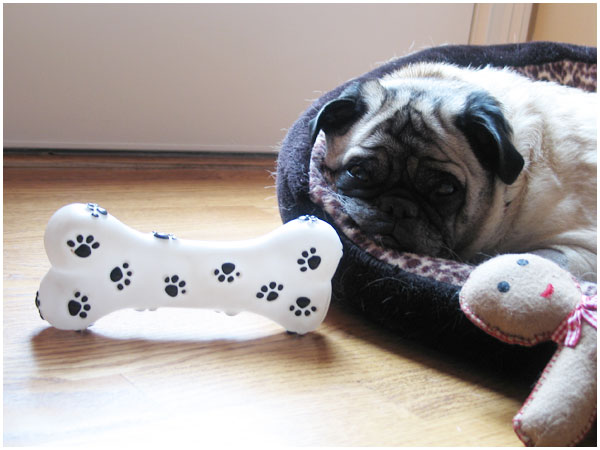 Another shot of the Little Emperor. In addition to the shots, he was also injured recently. He was bounding after another dog outside and hit a car. No – the car didn’t hit him, he ran into a moving car. He was incredibly lucky, and happened to just time it so that he bumped into the car’s wheel without much injury beyond a few scratches. 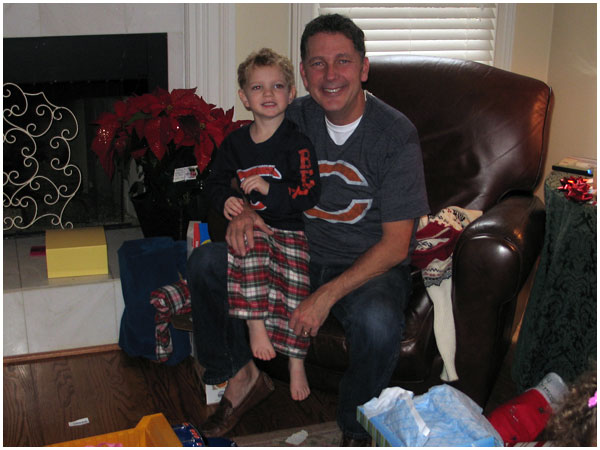 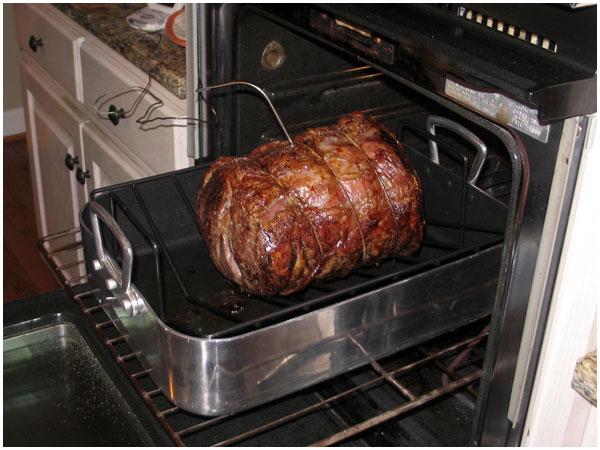 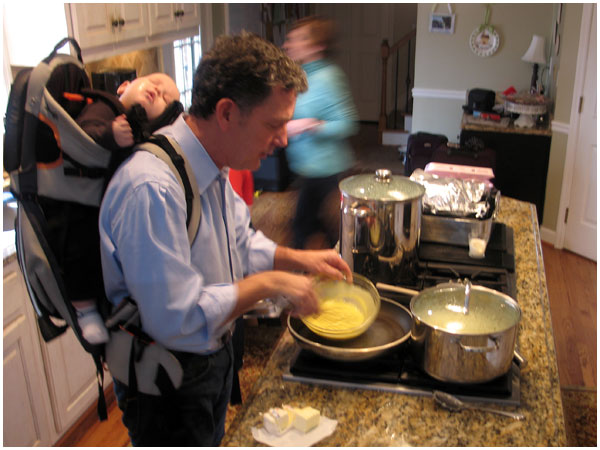 In addition to the roast, we had garlic mashed potatoes, asparagus, and rolls. Kirt was working on a sauce while carrying Sebastian in a backpack. I love how completely zonked out he is back there, totally oblivious and sleeping away. 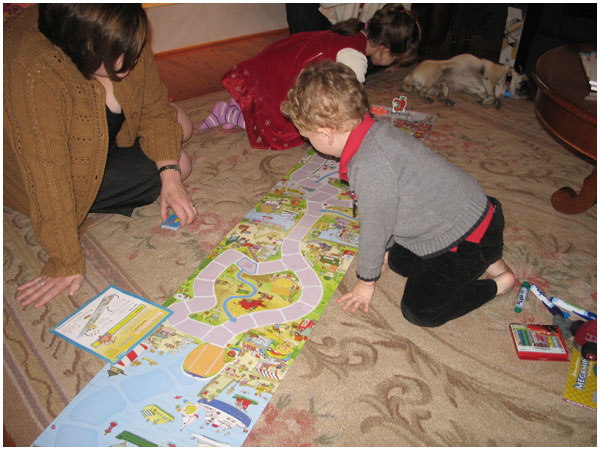 The premise is straightforward: Each person spins, and they move their piece a set number of spaces (1 -3). If the spinner lands on a picture of a gold bug, the kids have to use a magnifying glass to find a particular object. They draw from a deck of cards, and then search for things like a kite, or a mailbox, or an anchor. There are these plastic magnifying glasses that the kids place on each item they locate.

The kicker of it is that the final stretch is a boat ride to a picnic on an island. The boat doesn’t move until all the players arrive, effectively making it so that everyone wins at the same time. We played it maybe 3 times, and Isabelle was trying to get me to play it with her in the evening as well.

I tried to get out of it, and promised to play it with her the next day. First thing next morning, she’s knocking on the bedroom door asking if I’m awake and ready to play Busytown yet. 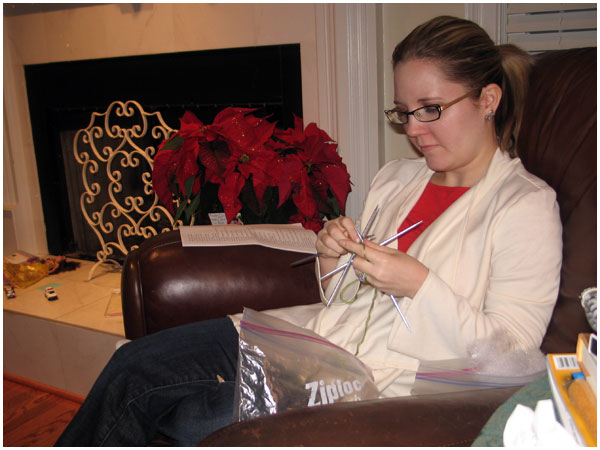 Much later in the evening, Liz and I relax a bit in the living room. Tricia and Darryl left back for Indiana, and Kirt and Anne stepped out to a few holiday parties in the neighborhood. I read for a while as Liz did some super fancy knitting.