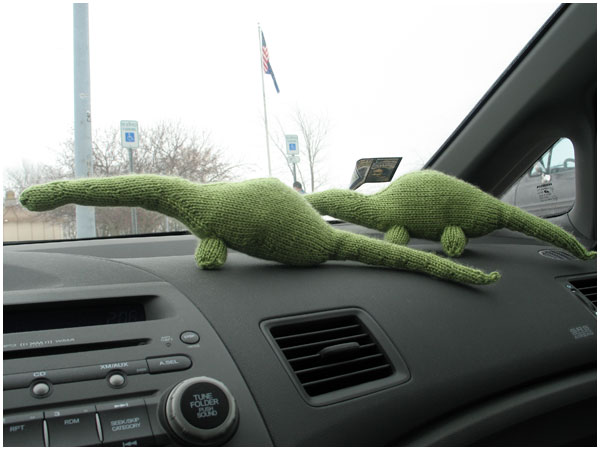 Liz and I left for Indianapolis late in the morning (a little later than we intended), but made decent time along I-65. While in the car, Liz was working on some hand-made presents: two knitted dinosaurs. These were gifts that she had started a few weeks ago, and was finishing up the legs and eyes on our trip. I snapped these photos while we were at a rest stop. 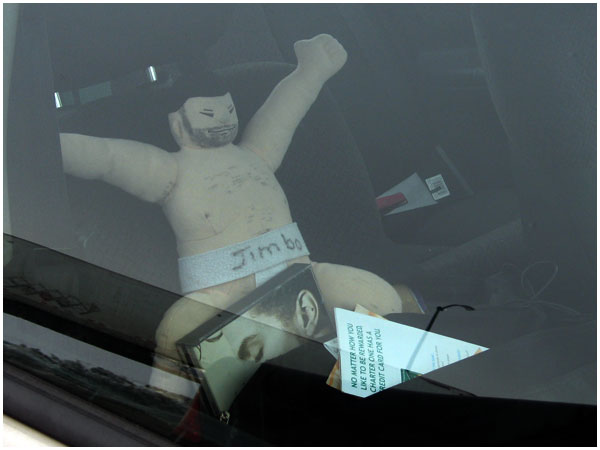 Spotted this in the car next to us. This has to be the worst looking voodoo doll I’ve ever seen.

Also? I don’t know that a lot of sumo wrestlers are named Jim. 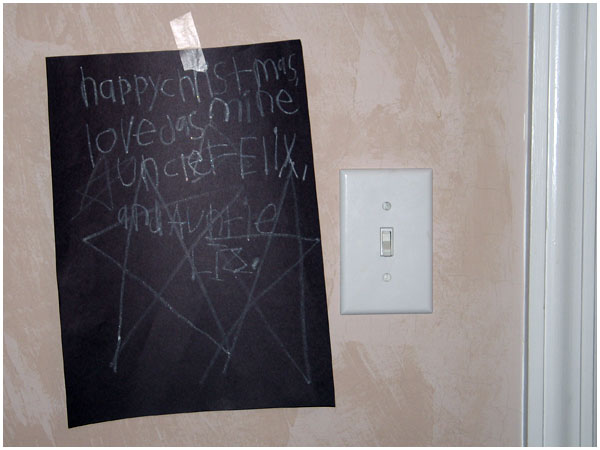 When we arrived, Jasmine was excited to show us a welcome message she had made. 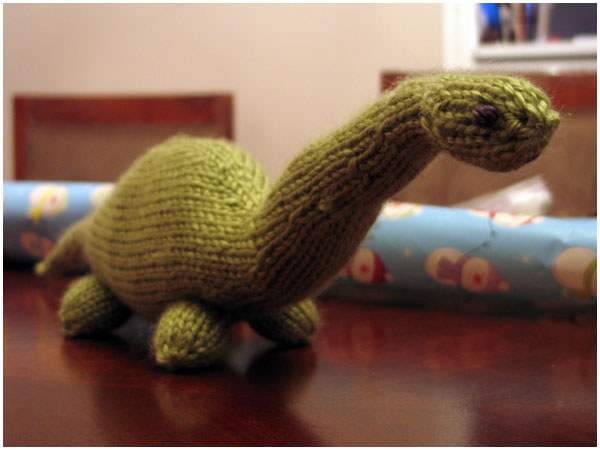 The dinosaur, about to be wrapped up. 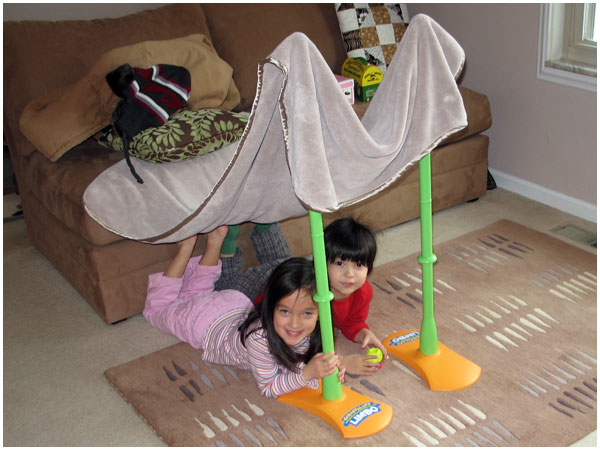 Hanging out with Jasmine and Jahnu, under a makeshift tent. 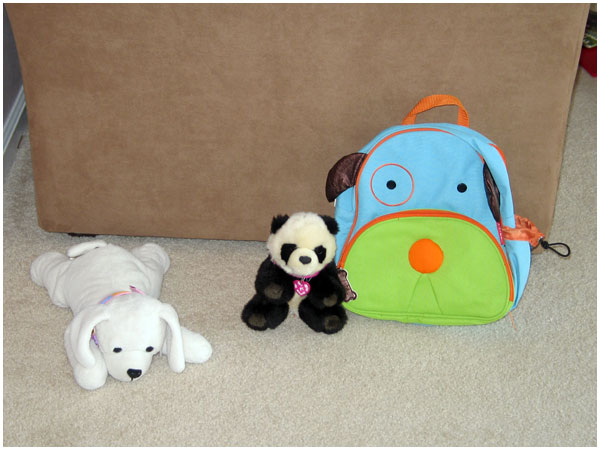 Stacey and Shane were taking everyone to visit Shane’s family in Gas City, so we had the place to ourselves for most of the afternoon/evening. Before they left, Jasmine insisted that I care for and feed her two pets.

L to R it’s Bella, Cheeky Bear, and Jahnu’s backpack. Which I also had to care for. 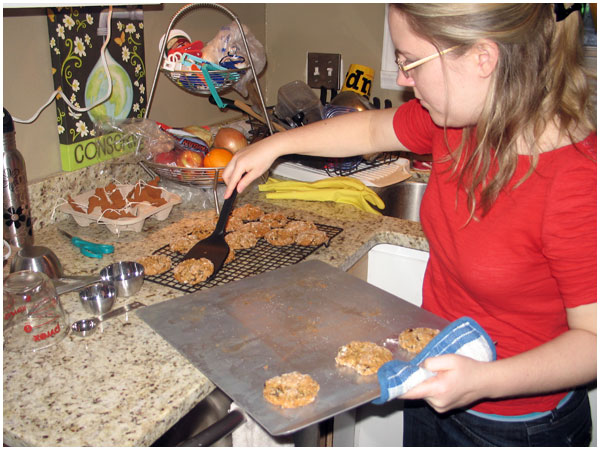 As a present for Stacey and Shane, Liz made a batch of her famous oatmeal raisin cookies.

Fast-forward to later in the evening. My folks were both incredibly sick (my mom lost her voice), and only came over to hang out for an hour or so. In retrospect, they should have stayed at home… but they hung out for a little while with us. 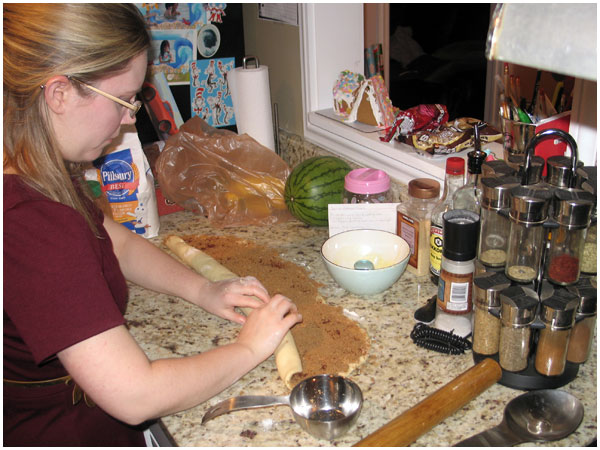 Prepping for the morning, Liz was also working on some cinnamon rolls. 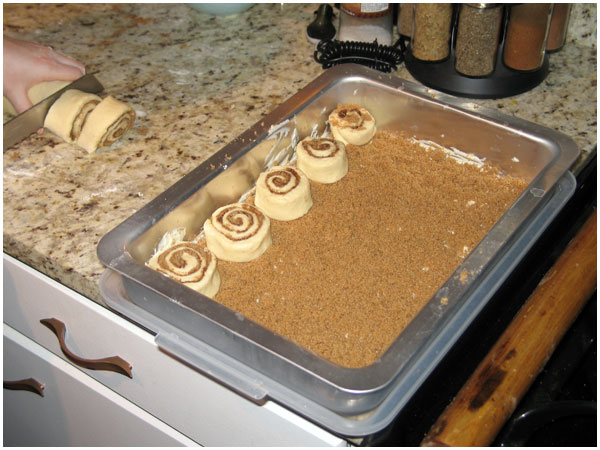 That, my friends, is a delicious bed of brown sugar that’s resting on top of a ridiculous amount of butter. 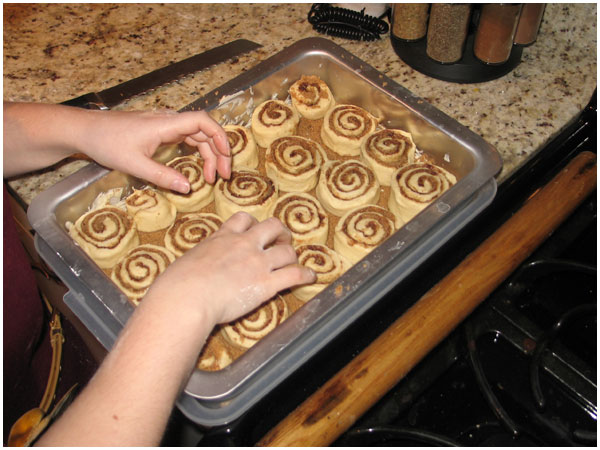 It took some serious Tetris skills to get all the pieces to fit in. 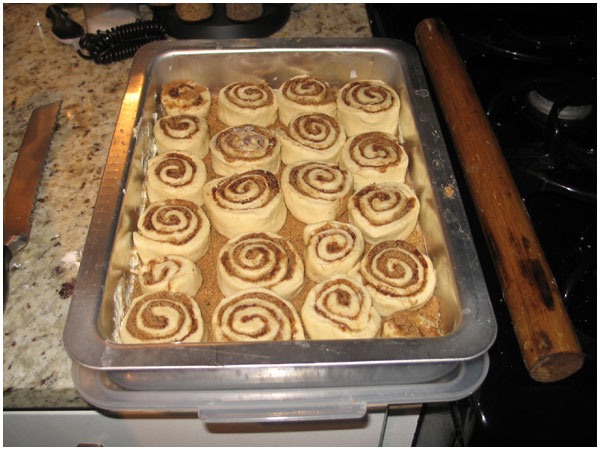 These look SO good. I’m pretty certain I’d eat this even before it went in the oven. 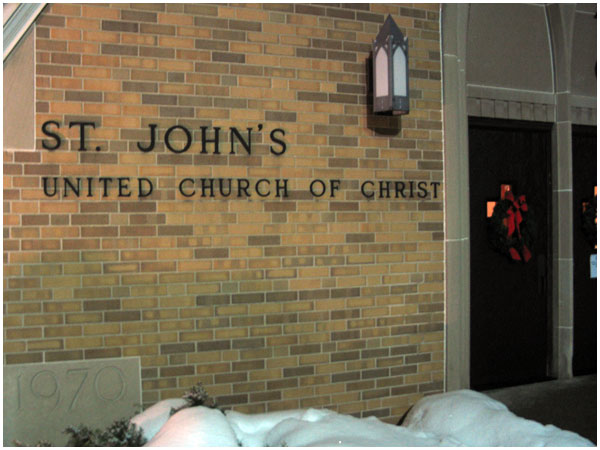 Around 9PM, we headed over to visit my Aunt Vicky and Uncle Bennie, my cousin Andrew and my grandma. From their house, we made our way down to the south side of Indianapolis for the midnight service at St. John’s. 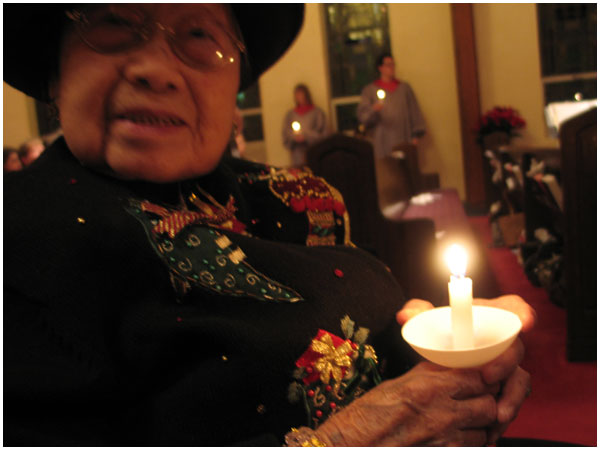 It always feels incredibly awkward whenever I attend and want to take photos. I feel like an outsider, making a lot of noise while others are having a very personal, spiritual moment. I really wanted photos of my family holding candles during the singing of “Silent Night,” and though it felt really awkward/inappropriate… I’m glad I at least got this blurry shot of my grandma. 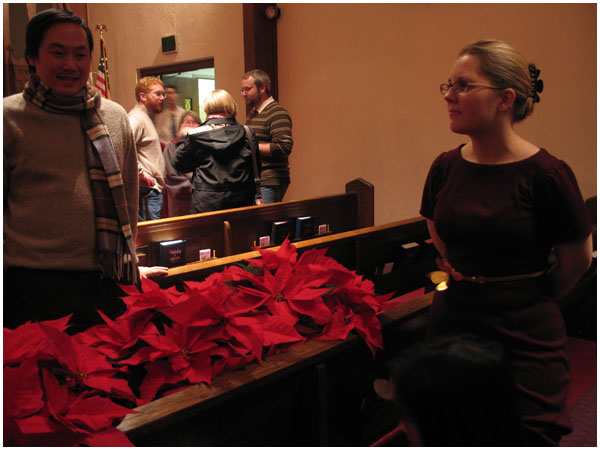 After the service. Cousin Andrew and Liz, guarding the poinsettias. As is our tradition, church members make a donation and “buy” a poinsettia for someone they’re thinking of. Each year my grandma buys at least three or four, and almost immediately after the service ends… she’s up and making a beeline for the stage, wanting to grab her flowers.

Each year, I try to slow her down and suggest she wait for the bell choir to clear out of the way. And each year, she’s having none of it. I end up following her to the stage a few moments after trying to stop her. 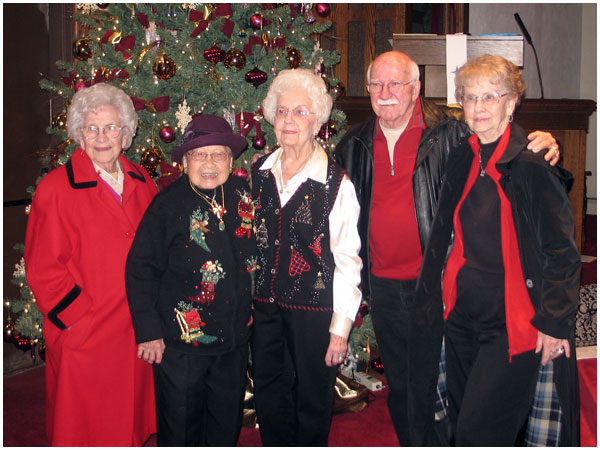 Grandma, posing with some of her friends. 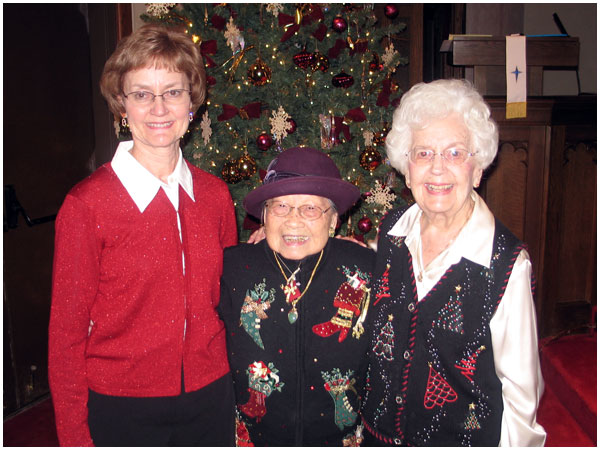 Another group of church friends. I remember my dad estimating that our family has been involved with the church since 1953. Everyone else has since moved away, and now it’s just my grandma. And on Christmas Eve, she usually has us surrounding her – her entourage. 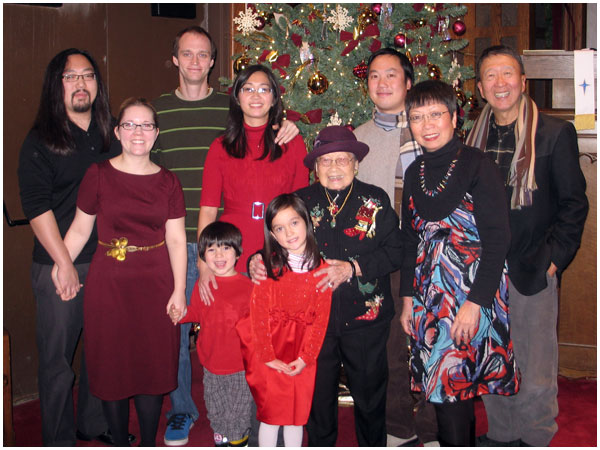 Sidenote: You know my parents were really sick since they weren’t in attendence. 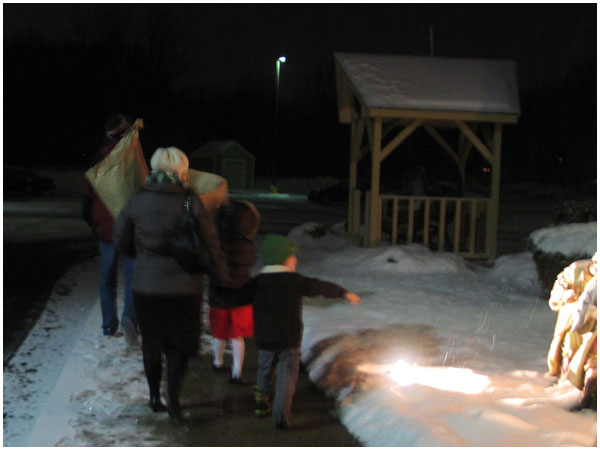 We stuck around a long while, taking photos. In fact, we were the last folks out of the church. This is us walking to our cars, around 1:15 AM. 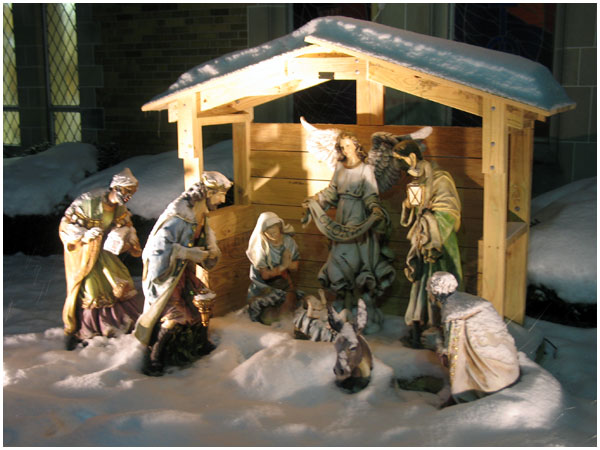 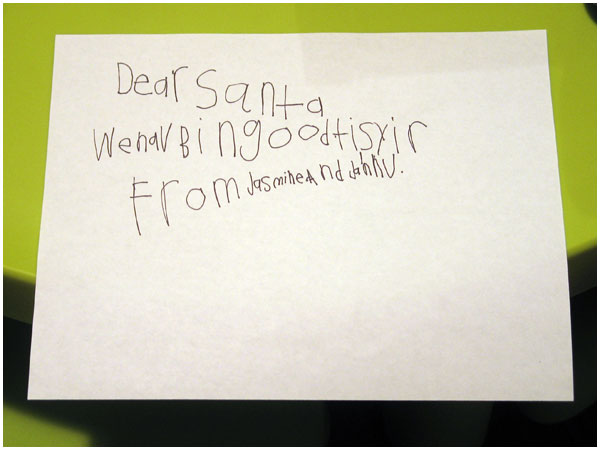 We were talking of letting Jasmine and Jahnu open just one gift each, but we got home so late… they went straight to bed instead.

Jasmine wrote a note to Santa, right before heading to bed.

After the kids went to bed, Stacey, Shane, Liz and I hung out a while snacking and talking. Liz ended up baking the cinnamon rolls so that we’d have them first thing in the morning. By the time we headed to be, it was closing in on 3AM.