This morning, on our way in to work… I was unsure what to expect from all the blizzard talk that’s been circuulating lately. I treat local news like I would an uncle who tells crazy stories – most of it is probably embellished, despite there being some small grain of truth.

While I expect newspaper headlines to be all doom and gloom, I saw an update from the National Weather Service that had this to offer: “Consider if getting to your destination is worth putting your life at risk.” While I’ve tried to remain skeptical about the upcoming snowfall (this is Chicago after all, and we get snow in the winter)… I began to get a little more apprehensive. 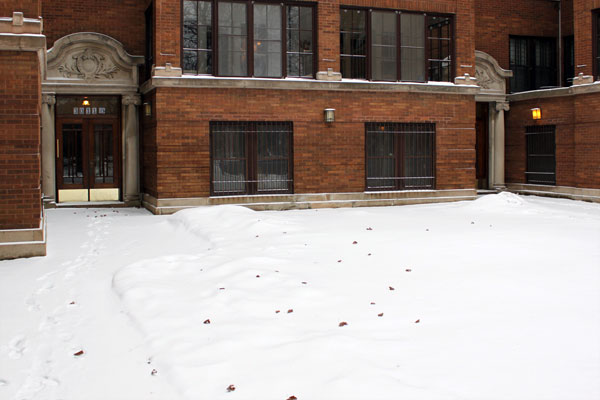 As we walked towards the Logan stop, I decided to take a few photos. I figured these would be good “before” shots, to compare with how things would look tomorrow.

Our car and scooter. 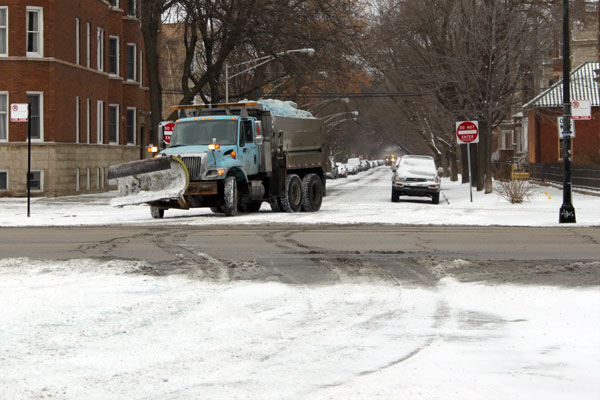 Across the street, there was a snow truck already plowing and laying down salt.

At work, we had expected to be open today and tomorrow like normal. Late in the day, a message was sent out letting folks know the office would be closing early today, and be closed tomorrow. Though we would be “closed,” everyone would be working from home/remotely – an easy proposition for a tech company.

Folks began leaving around 2 – 2:30PM. I stopped over by Justin and Allison’s desks, and grabbed a little video of the snow blowing sideways, down Jackson. 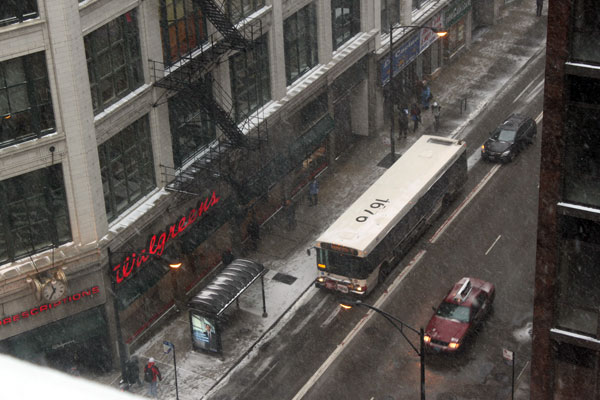 Looking down on State and Jackson, with the snowfall starting to pick up. 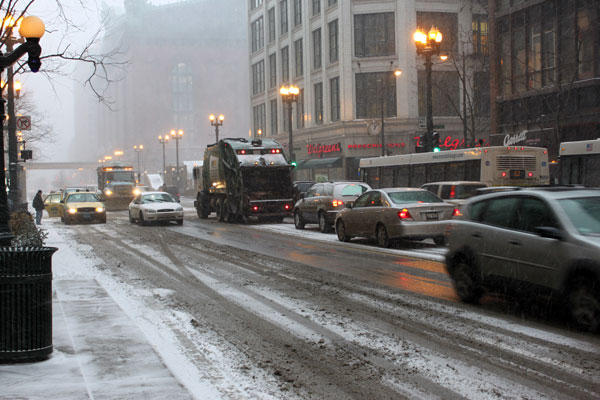 Outside, looking down State Street. About to head down to the Blue Line. 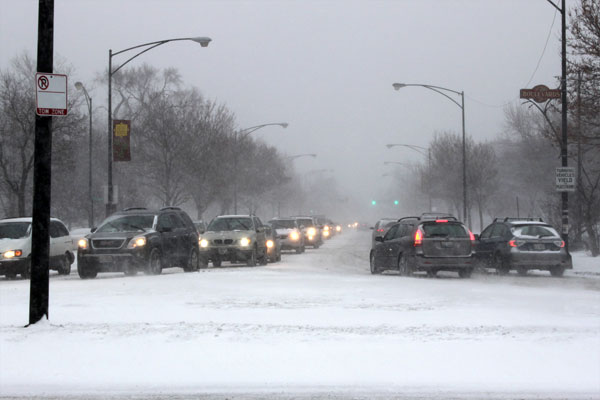 At Logan Square, looking west down Logan Boulevard. Cars were moving pretty slowly, there was a decent amount of snow and wind… and for the first time ever, I saw tons of cars backing up Logan Boulevard. It was weird to see. 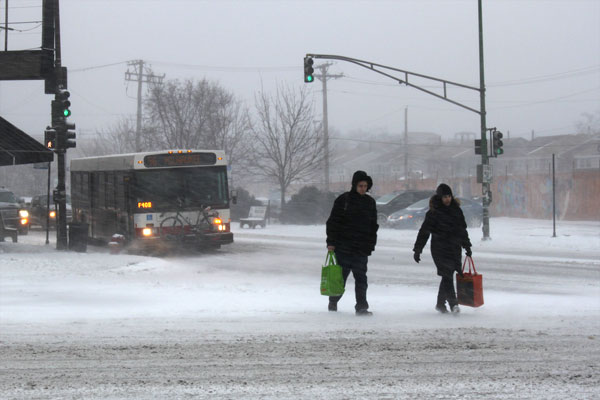 Two folks walking home. I love the fact that there’s a bike on the Milwaukee bus. 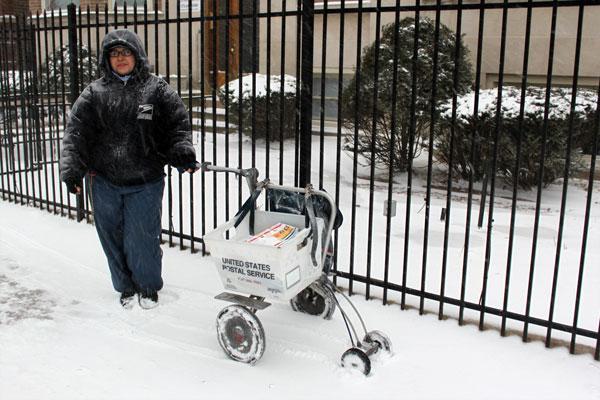 Near our place, I spotted our mailman (lady), and got her to agree to a photo. When I asked her what the Post Office had planned for tomorrow… she told me they were still working. She said to us: “People like to get their mail.” 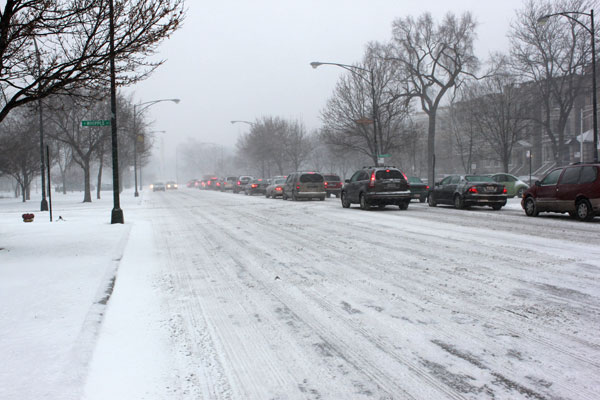 On Logan Boulevard, looking West. The streets are starting to look a bit rough.

Cars on Logan Boulevard, backed up all the way to Sacramento. Madness. 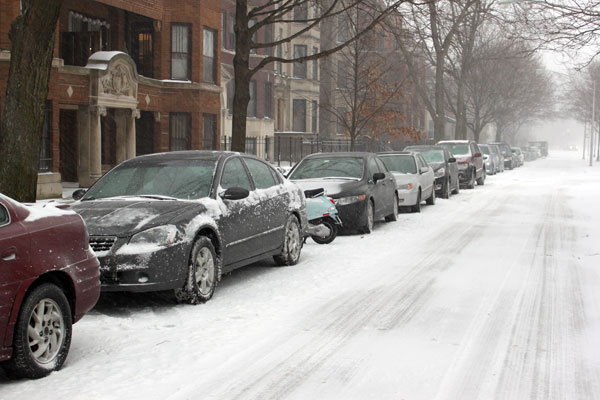 Looking down our street. I’m glad I got a parking spot out front, as I’d hate to be parked in the back (where digging out would be 10x harder). 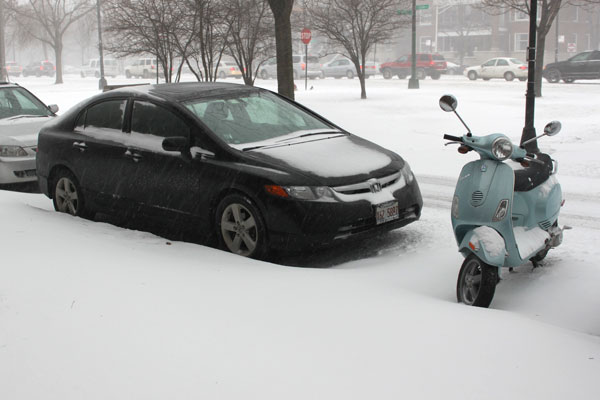 Car and scooter, so far so good.

// Edit: It was definitely snowing and gusting a lot more than comes through in these photos. Though there wasn’t a lot of snow on the ground, it definitely was beginning to accumulate… and you could start to see traffic snarling up. Glad we got out of work early, and we were definitely glad to be home.