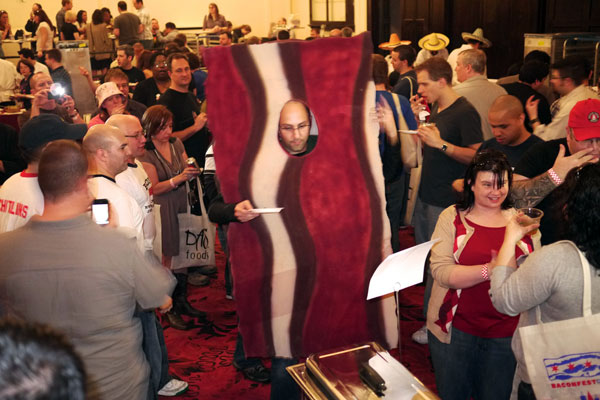 Several weeks ago, Liz sent me a link to an event called Baconfest. You know, for the blog. While I like bacon a lot, it’s not something I have all that often. I’m not a fanatic, but if you set some down in front of me… I’m not going to say no. Here’s a description of the event:

Baconfest is a culinary festival dedicated to Bacon. A collection of Chicago’s greatest chefs come up with amazing bacon concoctions to serve to our guests. A selection of awesome liquor sponsors provide drinks that either feature bacon as a main ingredient or serve as a perfect bacon accompaniment. Bacon vendors give out samples of their bacon products and sell their wares in the Vendor Expo.

Let’s start off with the toughest part of this whole event: tickets are a whopping $65 each.

Yeah. I had to debate that for a while, but ultimately decided it would be fun to attend… and also would be some pretty great blog content. So essentially, I’m doing this for you.

For each ticket, you get access to the “Chef Area,” where there will be 55 chef stations giving out samples. They’ll go until they run out. In addition to that each person will get six drink tickets, for beverages from the alcohol sponsors (there’s a bacon Bloody Mary, along with a Bacon Chocolate Martini and Bacon-infused rum). 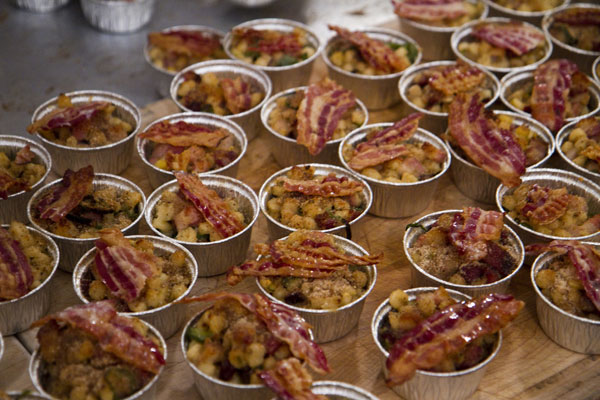 There are a lot of participating restaurants involved, and there seem to be some pretty big names involved. I’m not very up on the restaurant scene, but there are a few names that even I recognize… so I take this as a good sign. In addition to big names like Moto and Longman & Eagle, I’m happy to see that Wao Bao will also be there, with their hot asian buns.

Right at 9AM, I hit the ticket page and placed an order for two tickets. Liz is debating going with me, so I decided to get two to be safe (if she bailed, I could get a friend to come with). I wasn’t 100% sure if she was going to attend, so under the “Ticketholder Name,” I put myself down twice.

As I’m on the Paypal page, I happen across a mention that tickets are non-transferrable. They want a specific person for each ticket, to avoid scalpers and the like. Hm, I think to myself… I should probably edit things and add Liz’s name.

So I click to edit my order, and I see that the presale tickets have completely sold out. This was all in the span of three minutes, maybe less. In a panic, I hit “back” on my browser and was able to return to the Paypal page. I quickly completed my order, and got a confirmation email from both Paypal and the event.

So this is what I mean when I say I think I’m attending. I shot an email to the organizer, asking for confirmation… so we’ll see.

If you’re considering going, tickets go on sale to the general public in about 2 hours: Friday, February 25th at 12:00 PM. Check here for the link to buy.

And if this general sale is anything like the pre-sale, be prepared for it to get sold out rather quickly. $65 is a hefty price, but when else are you going to be around so many people cooking with so much bacon? If you end up getting tickets, drop me a comment. Maybe we’ll see each other there.