Liz Gets Her Wisdom Teeth Removed

Yesterday, Liz went in to Northwestern and had her two top wisdom teeth removed. She’s had the procedure done before, but only for her lowers. The whole morning, given how calm she was and how nervous I was… you’d think I was the one going in for the procedure.

Liz preferred to be put under, so she was completely out during the entire procedure. When she began to wake up, they put her in a “recovery room” and allowed me to sit with her. 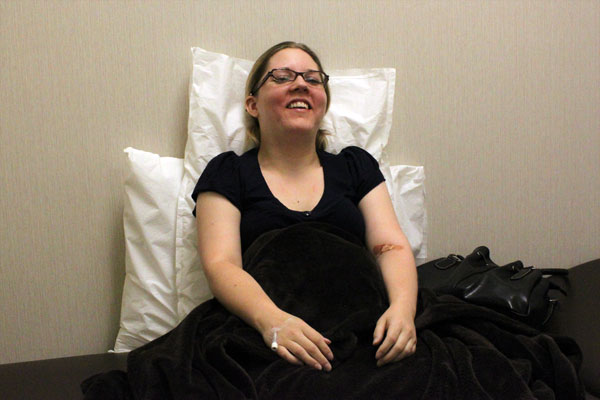 Liz, shortly after waking up.

Since she has really small veins, they had a difficult time getting an IV in. She had given some blood for a cholesterol test earlier in the morning, and so they had to use her left arm (which has always been problematic to use). After a lot of attempts, they ended up going in through her right hand (there’s a little dangly thing that was still inserted when I showed up.)

I have to say – I’m glad I’m not a doctor. Even seeing that thing in her hand made me a little queasy, and I had a hard time looking at her while in the room. Liz went on in great detail about how many tries they needed to make, and how bad the hand thing pinched, and I just kept nodding and looking away.

We took a cab home (with an aggressive cab driver), and I was half convinced Liz was going to either pass out or throw up in the car, due to this guy’s enthusiasm. We got home in decent time, and ended up heading straight to the car.

Liz needed to keep changing out her gauze every 30 minutes for the next two hours, so instead of taking her upstairs to sleep… I ended up driving her around to pick up her medication. We were advised not to let her sleep with the gauze in, so errands felt like a good way to keep her awake.

We picked up her pills, got a nice McDonald’s shake for her, and made the long walk up the apartment stairs. She slept, on and off, for most of the day.

We had a small scare in the evening, where she took her pain medication on an empty stomach. She was in the kitchen and said she felt like fainting… and quickly made her way to the couch. There, she ended up not quite throwing up but having dry heaves… and all the color drained out of her face. I could see she was struggling not to pass out, and I got on the phone immediately with the doctor.

Well, not immediately. It was after hours, and I called and they ended up paging him. So there was a lot of nervous waiting around. I did get a hold of the pharmacist, and he told me to keep an eye out for an allergic reaction (itchy skin, hives, etc). After talking with the doctor and waiting another hour, her symptoms subsided… with the final consensus being that it was a reaction due to there not being enough food in her system.

I have to say – I was pretty nervous while this was happening. I had one foot out the door, ready to pop her into a car, with us headed to the ER. While the throwing up and passing out didn’t overly concern me, it was the color of Liz’s face. Ashen is a good description, as her lips were a pale shade of gray. I had never seen anything like that before – it was really disturbing.

Again, thankfully things picked up and she eventually got back to normal. The incident shook us both up a bit, and I think it ended up draining Liz of a lot of energy. She was sleeping off and on again, until maybe 9 or 10PM.

We’ve gone through a lot of gauze, and the bleeding’s no longer as bad as it was. Lots of ice packs, and a lot of applesauce and yogurt and mashed potatoes. Hopefully today ends up being a better recovery day than yesterday.