From Now On, Nobody Is Allowed to Pull My Finger

Over the past few months I’ve had this odd, persistent issue with my right index finger. It hurts a bit, from time to time, but there’s nothing specific that seems to cause it. Some days it’ll be uncomfortable, other days I don’t notice it at all.

For a while, I assumed it was a repetitive stress issue, as this is my mouse clicking finger we’re talking about. At its worse, there was maybe one day where I ended up using my right middle finger to click and navigate, but that’s been the worst of it. 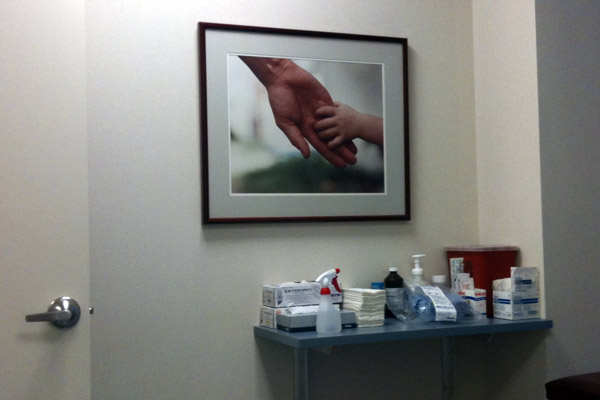 Since the issue has gone on and on, and hasn’t really improved… I figured it would be good to go and see the doctor that treated my wrist problems. So I made another appointment with Dr. Wiedrich at the Chicago Center for Surgery of the Hand.

I went through a lot of finger stretches and motions, to see just where I was experiencing the discomfort. I also had some x-rays done while I was there.

Unfortunately, I thought I could have received a digital copy of the x-rays… but found out that CD’s cost $25. In hindsight, I should have taken a photo of the x-ray itself.

Long story short: I’ve got arthritis. It’s a small growth of bone in my right index knuckle that’s causing the discomfort. And based on the x-ray, there’s also a small cyst on my right ring finger, which is an indicator that I may experience something similar there in the future.

I was given a prescription for some anti-inflammatory medication, which I’ll be taking for about two weeks. In addition to that, Dr. Wiedrich took me to a back room so I could be fitted with something called “Buddy Braces.”

This back room area was one I had never seen before. On walking in, it was a longish room with about five or six tables/workstations. There were maybe four or five other doctors attending to several groups of people. I saw a lot of velcro fabric in spools on the walls, as well as some kind of heating device that held a lot of hot water (it resembled a large lasagna dish). Doctors were putting in what looked to be an 8.5×11 piece of pasta in there… and I later saw that it was something that could be molded to fit a patient’s arm/hand exactly.

It was a little surreal being back there, and the whole time I couldn’t help but think that I was attending some kind of craft-based summer camp… waiting around for someone to teach me how to make lanyards. 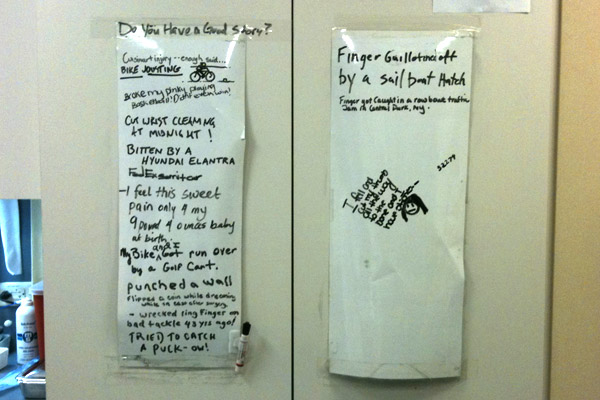 As I was glancing around the room, I spotted some dry erase boards where people had left good stories about why they were at the doctor’s office. I think “Bike Jousting” is a fantastic reason.

I did ask one of the doctors if I could photograph the notes, and got an ok (so long as there weren’t any names due to privacy concerns). As I was snapping a photo, a girl nearby told me that I couldn’t photograph the stories without adding one of my own.

I responded with the fact that I wish I had a good story for my injury… but mine was lame, since my injury was a result of the slow ravages of time. 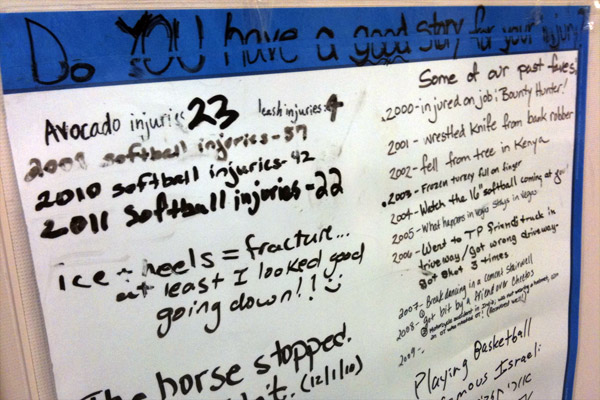 On the way out, another doctor pointed me to another set of stories (which he said were better). I felt weird lingering and photographing so much, so I just took a quick closeup. 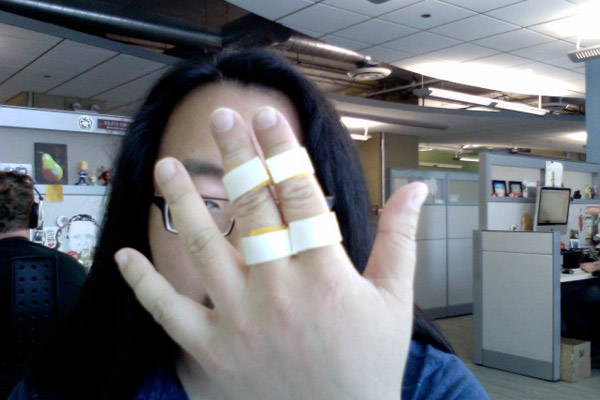 Back at the office. Here’s a shot of my buddy braces. Hard to believe these guys cost $40, but we’ll see if my insurance covers this.

And yes, in order to write out this blog post… I did take them off. Shhhh.

Related:
Wrist Injury: Visiting The Chicago Center For Surgery Of The Hand
I’ve Now Torn The Cartilage In My Left Wrist, Too. Somehow.
Images From My Wrist MRI
Wrist MRI Results: Options And Decisions
Lanyards
The Lanyard, Text
A Note on Lanyards

medical
« Brief Visit with the Galts
Emmis the Menace: Game 5 »