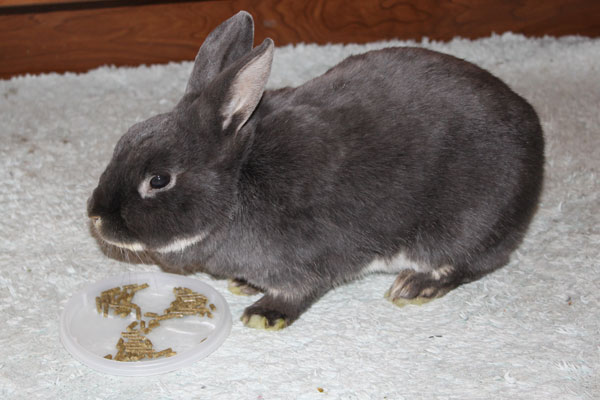 I am saddened to share the news that we had to put Quincy to sleep today. His age and arthritis made movement for him difficult, and for the past week and a half… he was largely unable to move around without assistance.

It was an incredibly difficult decision to make, as Quincy still seemed full of spirit and life. His mind was willing, but his body was not. His back legs were not really able to provide much support, and he spent most of his time lying on his side.

During his last week, we usually had to prop him up during meal times (either by hand, or using a rolled-up towel). His body had simply run out of steam, despite the fact that he, himself, hadn’t.

He was still a voracious eater, even at the end. I think both Liz and I feel he could have lived several more years, if only his legs and back hadn’t given out.

Last Saturday, we tried to build a contraption that would help Quincy walk – a kind of rabbit wheelchair for his back legs. It really didn’t work out too well, but we had seen some videos online that had given us some hope.

On Tuesday, he had a really good session at Integrative Pet Care where he was on his feet and balanced for about 45 minutes – totally without support. My hopes were briefly raised, seeing him so independent again.

But both of these days… they were short-lived moments. No matter how good the times, they were a fraction compared to his bad days.

Talk about Quincy’s health turned into a quality of life conversation. Though we wanted Quincy to stay around as long as possible, we didn’t want him to be uncomfortable. We would have been keeping him around for us, and that would have been wrong – no matter how much we wanted it. Quincy was an old man. He was on a whole host of medications for the last few years, and honestly… I can’t remember a time where a meal didn’t start off with multiple syringes of meds. 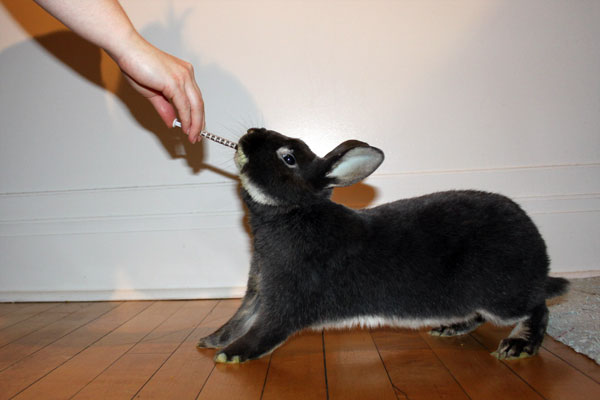 He was always a trooper about taking them, though.

Last night was a difficult night. As we went about our evening routine, it struck both Liz and I that this would be the last time we’d prepare food for Quincy (in the evenings, we make dinner and breakfast for the next morning).

While getting dinner ready, Liz emptied out the remainder of Quincy’s medication. This past week, it’s been the small things that have been difficult – scheduling time off work, buying less lettuce than usual at the store, scheduling vet appointments for the future that we might have to cancel. All of these small things were tiny beginnings, small starts to our saying goodbye to Quincy. For several weeks, in addition to his regular medication, Quincy was getting acupuncture through Integrative Pet Care under the guidance of Dr. Zenoni and her assistant Lindsay.

Initially, it really helped out. But over the last month or so, it seemed to help less and less. As I said, his body simply ran out of steam.

We found Quincy back in 2009, almost exactly six years ago. Originally, we were looking to find a companion for Baxter, and discovered Quincy during several rounds of bunny rabbit speed dating (which, yes, is actually a thing).

His name is actually a complicated topic. His name originally was Marciano. On the first night we brought him home, he had his own pen area (a caged off part of the room).

The next morning, I woke to discover that he had broken free and found him sitting on our couch. I saw the quizzical expression on his face, as though he were saying What? What’s the problem? I’ve been waiting for you this whole time.

That morning, I wanted to name him Dillinger. But we ended up going with Quincy. His full name is technically Professor Quincy Snugglesworth, but we only ever call him that when he’s giving a lecture. Every other day of the week, it was just Quincy. 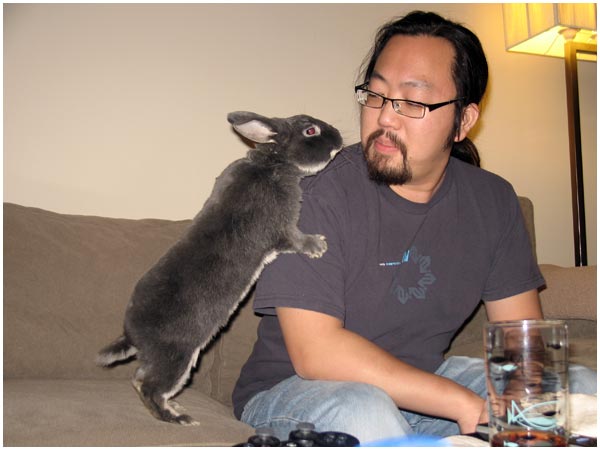 Quincy, back in the early days. He was much more active, and would hop up onto the couch from the floor, if he caught a whiff of food. Liz with Quincy, being pretty laid back.

Edit: As I’m writing this, I’m trying to show photos of Quincy from an earlier time. Back before his arthritis won out, back when he was always underfoot and darting around, from place to place.

It’s hard because he’s no longer here with us. After we put him to sleep, we brought him back home and laid him on the ground, in his area.

This is something we learned we needed to do, when rabbits are a bonded pair. We had Quincy’s body in his area so that Phineas could see. And to give him some time to understand that Quincy was fully gone.

We laid his body to rest in our front yard. It’s nice in that now, on our way to and from work, we’ll still walk by him every day. Even though he’s no longer with us physically, we get this small chance to see him every day.

Right now though, I’m incredibly sad. It’s a cold night here in Chicago, and we’re on the eve of what will be our first significant snowfall of the year. I’ve heard varied reports as to how much snow we’ll see: anywhere from 2 inches to 12 inches.

Most of Chicago is spending tonight looking outside, checking to see whether the snow has started. In reading Facebook and Twitter, I see a lot of people talking about the weather, about the arrival of winter.

As I’m writing this… every few minutes I have to fight back the urge to break down crying because I’m thinking about Quincy. And I worry that he’s cold, out there alone in our yard. 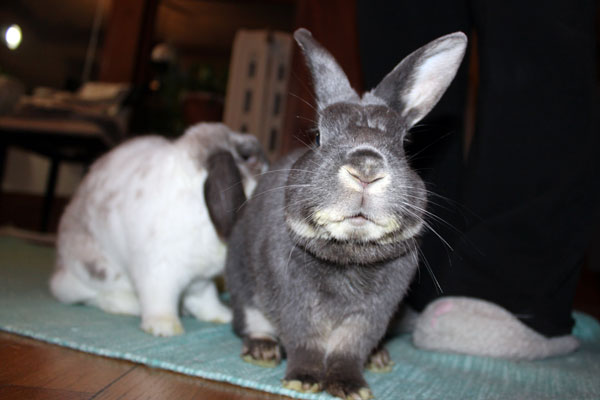 Quincy close up – looking a little curious, and a little disapproving.

It’s a rare thing to see rabbits when they “flop” – when they get so relaxed, they just plop over to one side. This is usually something that only happens when they’re really comfortable or relaxed, or feel incredibly safe.

We’ve seen this from time to time from Phineas, but it’s much more rare with Quincy. We spotted him sitting and nodding off slightly, and quietly crept over to see if he would flop. Amazingly, we caught it on film:

Here is one of my absolute favorite videos of Quincy. This was soon after we moved in to our second apartment in Logan Square. Back during Quincy’s more mischevious days:

Quincy, hanging out with a few of his friends. 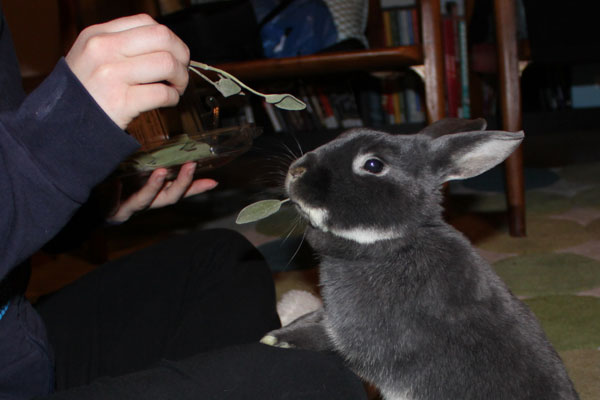 Liz and I are both incredibly saddened that we had to put Quincy to sleep. There was still so much life in him, and it all came down to his body simply not being able to do what it needed to do.

Quincy had many good years with us, and I want to believe we gave him the best possible care during that time.

We knew that his age was getting the better of him some time ago. And back then our vet, Dr. Horton from Chicago Exotics, told us to think of our days as “bonus time.”

Goodbye, Quincy. We feel so lucky to have found you, and it was truly great spending time with you. Thanks for hanging out with us for as long as you did.