A Mirror for the Flowers

On my walk to work this morning, I spotted a strange sight: a policeman, holding one of those mirrors on a stick (the kind you see in the movies, where they’re checking for bombs underneath cars). He was walking around the building at Washington and Clark, looking behind all the flower planters that were situated about seven or eight feet above the sidewalk.

As I passed by, I nodded and said hello… and he did the same back. I paused a few steps later, turned around, and started asking him questions.

Part of me was wondering if there was some kind of bomb threat that had been made, or if this was a regular thing. When I asked what he was doing, he said he was checking behind the planters, looking for things like dime bags, knives, etc.

After talking for a brief moment, I then asked if I could take his picture. He pulled back a little at this question, and wanted to know why (a natural reaction to a stranger asking for your photo). I then went into my regular explanation, talking about the blog and how I like to capture things that I encounter during my day.

He seemed satisfied with my response, and told me that he wasn’t allowed to pose for photographs. But that if I wanted to take his picture while he was working, there wasn’t anything he could do to stop me. 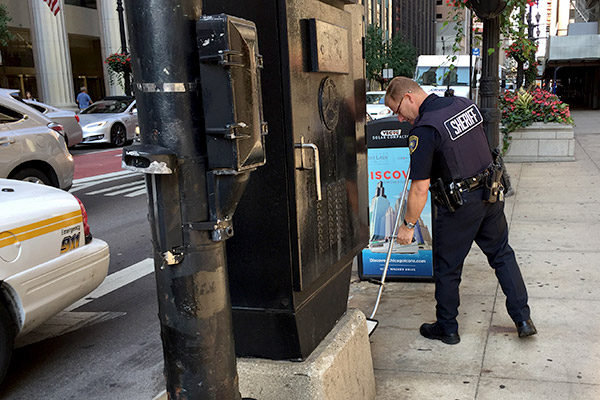 So as he continued his search (moving away from the flower beds, to the streetlight and the trash receptacles nearby), I got a few shots in. 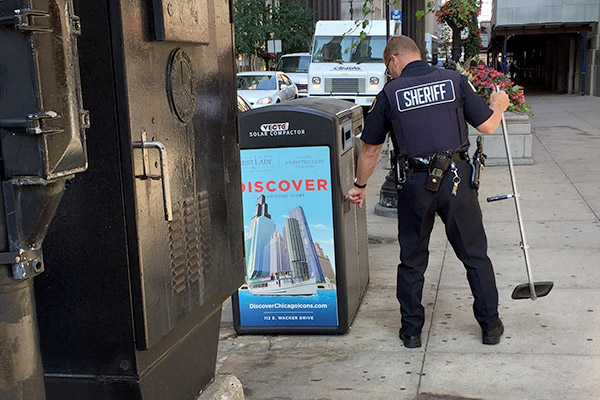 I didn’t realize, until I started to write up this post, that the building in question here was City Hall. Doh!

So this makes more sense that it would be a procedural, if not daily thing that happened. Maybe everyone else walking by is used to seeing this. But this was new to me.

Here I was, walking to a new office for a new job… and I encountered this man doing his job. And I found it all sorts of interesting.

I swear, some days… if I didn’t have a job of my own, I’d just follow people around that I ran into and pepper them with nonstop questions about their jobs. It probably wouldn’t be that enjoyable for the people I’d be bothering, but I’d find it fascinating.