Inside Outside House Day

Today was a house day for me and Liz, and we got a decent start this morning. After a lazy breakfast, we suited up and got outside around 10:30 AM.

While I was mowing the lawn, Liz was tackling the knotweed that had re-emerged in the back part of our neighbor’s yard.

This back area isn’t technically ours, but we were given permission to clear out debris and weeds… and Liz has been really focusing on this back area for a few weeks now.

For those that may recall the enormous backyard clearing project from 2015… this back area was not included as part of that removal. But lately, we’ve been hacking away at it bit by bit. And when I say “we” I really mean Liz. 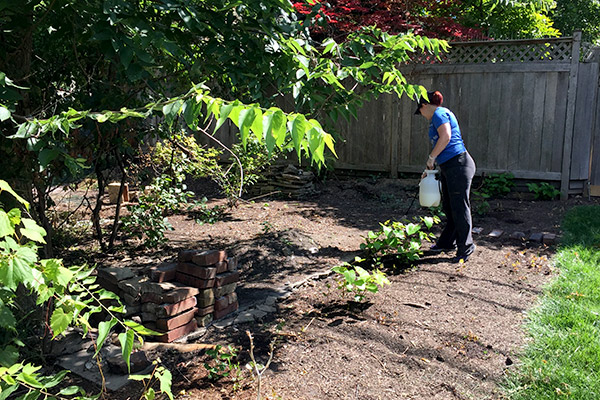 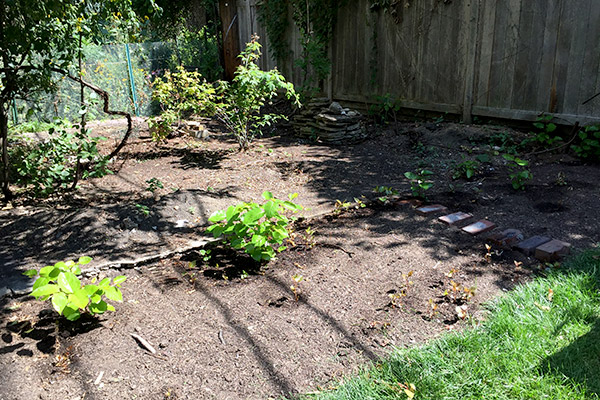 This is what the area looked like, at the start of the day. After I was done mowing, I chained some extension cords together and came out back here with the sawzall. And the two of us took down some vines, and a few small weed trees. 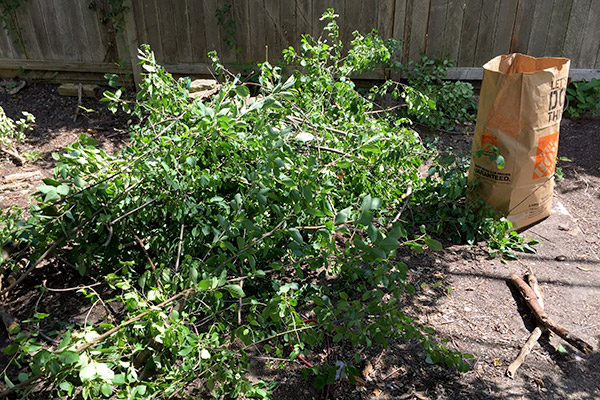 A lot of branches to clear up. 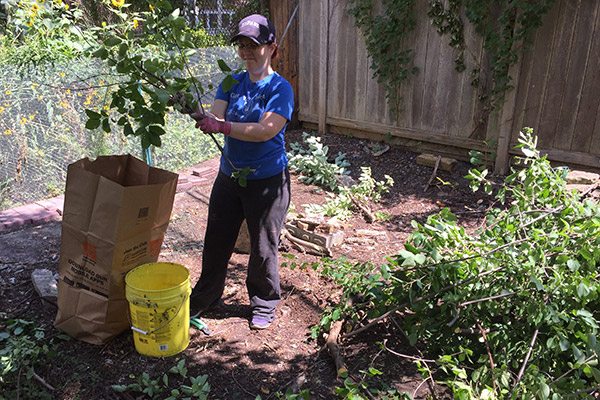 Liz, packing up the first of many yard bags.

After getting everything cut down, I left Liz to work in back while I went into the basement. Our next to-do is to paint all the rafters, in preparation for some lights – and so I went around coering up all the pipes and conduit. 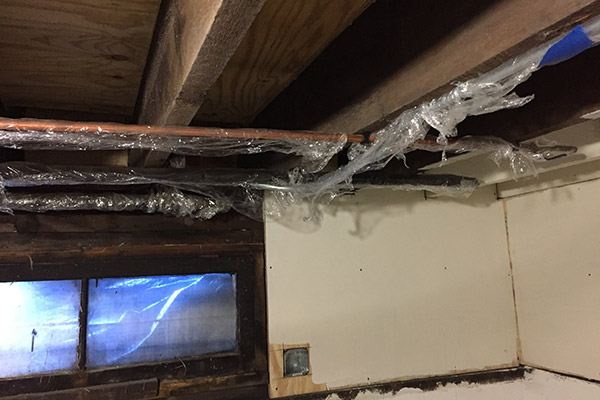 Clearing the back room took a while. And this particular task took… longer than I thought it would. Kind of a pain in the ass, actually. At several points, I started to wonder if I could skip all this and just “be careful” when I paint.

And then I remembered I’m a horrible painter. 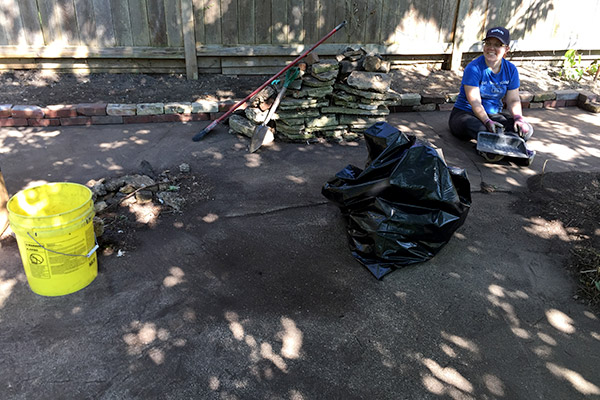 Outside, I found Liz taking a break after clearing out a HUGE part of the neighbor’s back area. She had discovered a large swath of concrete here some time ago, and when I showed up… the entire area was almost cleared off! 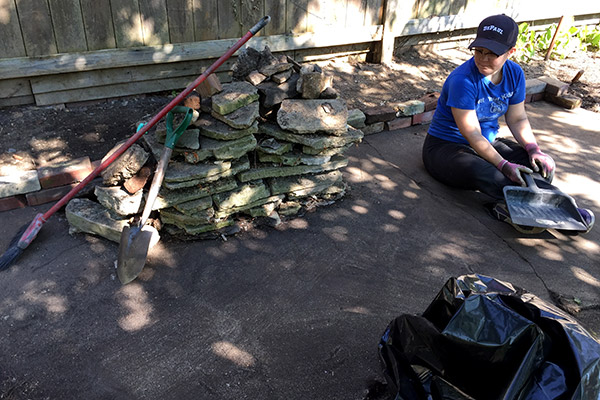 Also – she gathered up all the loose bits of rock and concrete in a pile (and also built a mini-wall of bricks, around the perimeter). 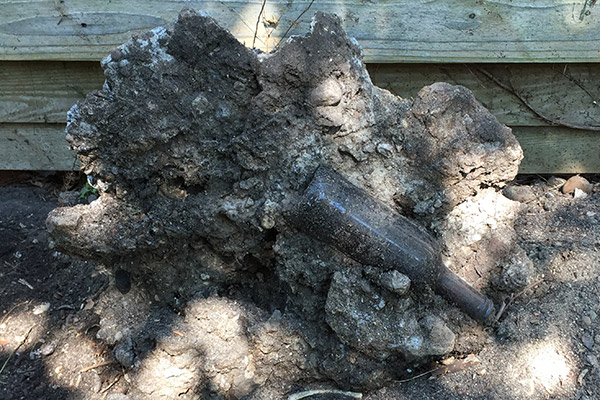 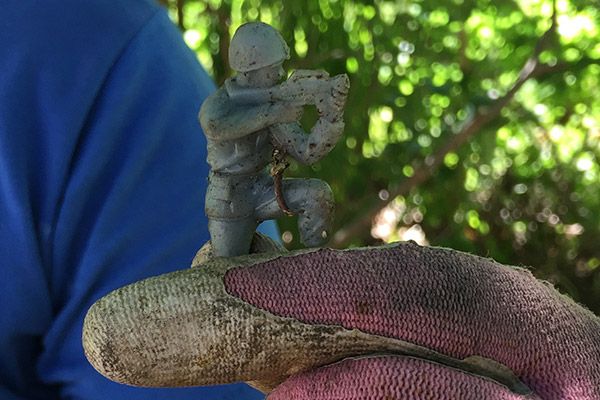 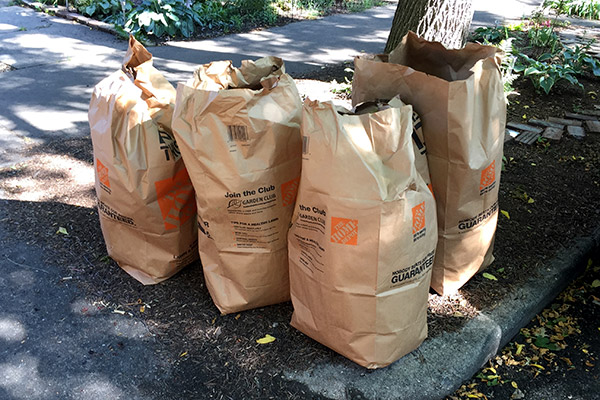 Some of the bags from the day. These don’t look like much, until you combine them with… 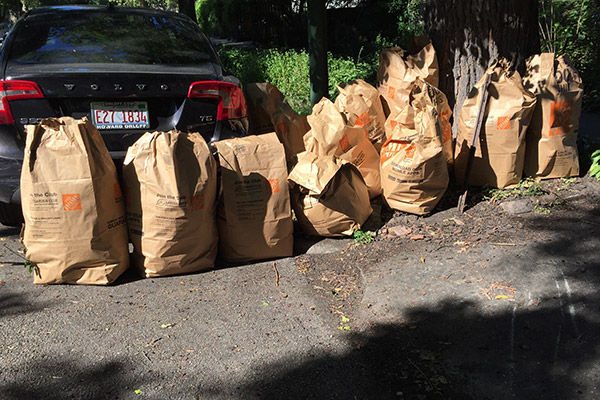 … these bags. There was a lot to throw away!

Liz and I worked pretty much non-stop, until about 4PM. We got some Jimmy John’s delivered for a late lunch, and were pretty exhausted at the end of our meal.

The day shot by really fast. House days tend to do that. Even though we try to aim to finish by 3PM, we always go over – propelled by the momentum of the day. It’s a good and bad thing, as we put in a solid day… but spent most of the day working. 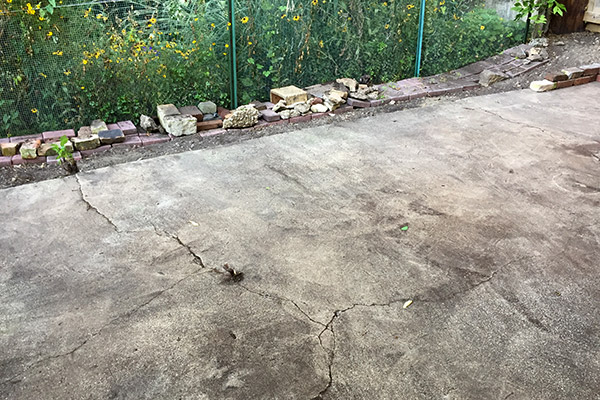 After the sun went down, I snuck back to get a few more photos. I didn’t think the ones I took earlier did the area justice. 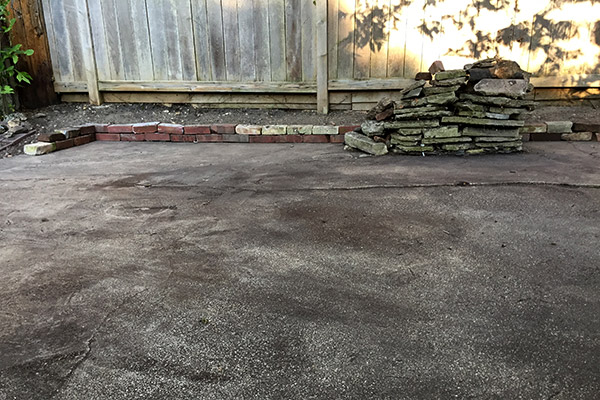 A better view of the concrete and brick. 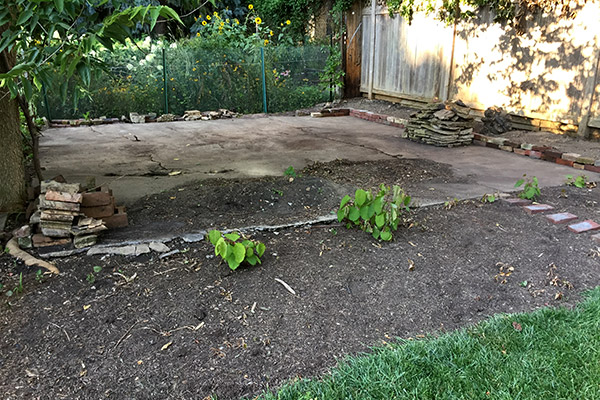 Here’s the back area, much clearer than it was at the start of the day.

You want to see something really crazy? Here’s what this back area looked like, a few months ago: Related:
Battling the Knotweed
Inside, Outside: Work on the Basement and Parkway

backyardbasementlizour first home
« The Turtle Escaped
The Clock is Ticking »