Poker Night at the Nerdery

Today was the end of a long week for me, with a lot happening at work as well as at home. There was an event, post-work at the Nerdery – a poker game fundraiser for Extra Life.

Each year, the company participates in Extra Life – a 24 hour gaming marathon that raises money for hospitals in the Children’s Miracle Network.

While the actual event is in November, in Chicago there have been a series of smaller fundraising events. Today, there was a poker tournament organized after work, with a $10 buy-in – and all funds going to Extra Life.

I’m a fan of poker, but was really feeling the pull of introversion and wanting to head home. Luckily for me, Liz encouraged me earlier in the week to sign up, and to stick around to play.

My current situation at work has me off-site at another company, four days out of the week. And so the only times I’m really at the Chicago Nerdery office is on Fridays.

It’s a bit of a challenge getting to know people, as my memory is terrible. And so I’ll meet someone on Friday, then have a solid week to forget their names, only to repeat the process again the following week.

Being in the office only one day each week makes things a little tougher, in terms of building friendships/relationships.

To clarify: this isn’t a criticism of the company, and more a reflection of my own personality. I’m typically withdrawn, and I do find myself struggling at times to be more “social” and outgoing. And only being at the Nerdery office once a week requires a more concerted effort to meet folks, on my part.

Though I felt like heading home, I’m really glad I stuck around – because I had a blast. 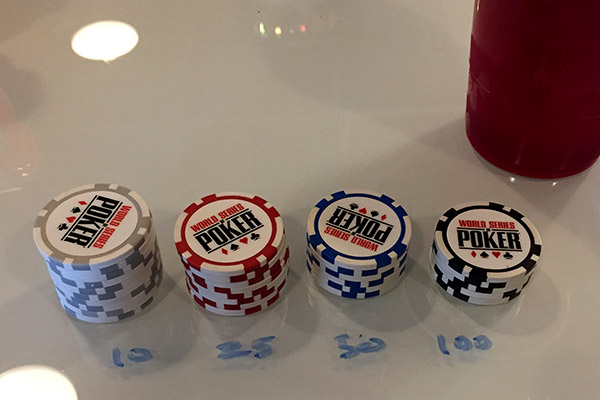 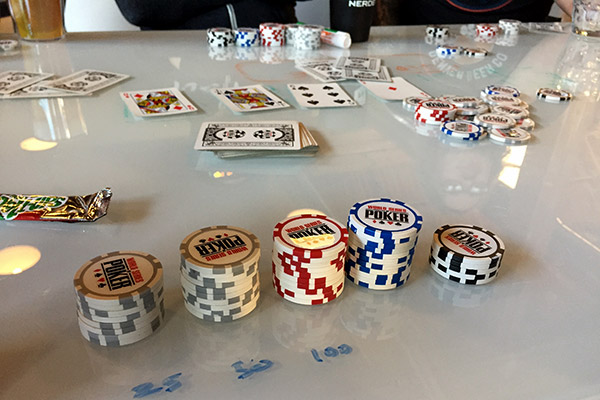 Made a couple of decent moves early on in the game. Nothing huge, but got a nice bit of padding. 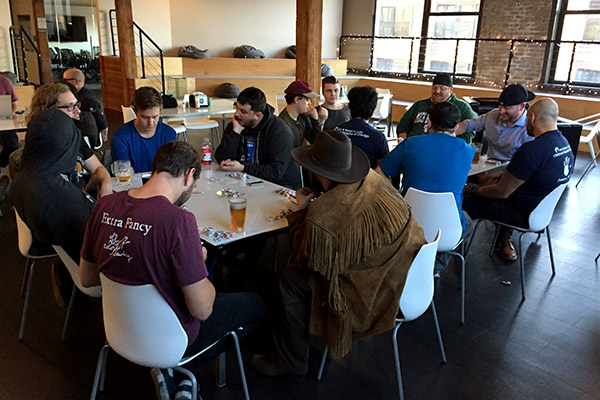 I do have to say – the space we have is really phenomenal. There was music going, food, and beer (having four different types on tap is quite nice). 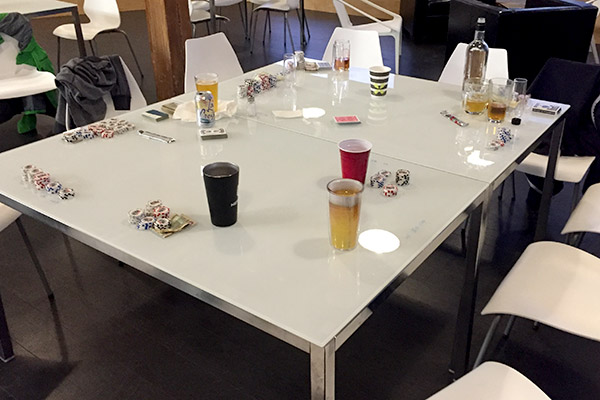 A pause in the game, shortly after we combined tables. Note that, at some point in the night, a bottle of tequila made an appearance.

I’m happy to report that I made it to the final table, though I didn’t get to stick around very long. I bided my time, and eventually went all-in against the big stack pre-flop. I had suited KQ against his KA, and on the flop got two more suited cards to get me really close to a flush.

Sadly, I got no more help. I lost out to a pair of Aces at the end – but it made for quite an exciting finish.

As tired as I was at 5PM, I’m really glad I stuck around. I got to hang out with folks, drank some beer, played some cards, and had a great time. I still feel like the new kid at school some times, but tonight was not one of those times.

Related:
Poker Night at the Inventory
The High Is Always the Pain and the Pain Is Always the High
Everyone… Everyone Here is a Winner
Texas Holdem: Tequila Rules