Today = Demo Day! Liz and I will be watching an older/sick bunny rabbit starting tomorrow, so we were in a bit of a rush to get as much “dusty” work done as we could, before the rabbit’s arrival.

Liz had some errands to run this morning, and so I was on my own to get things going. While we’ve definitely done a lot of demo in the bedrooms, we’re entering a different kind of phase.

A lot of the earlier demo was just prep, and to allow us to add insulation to the exterior walls. We’re slowly starting to enter into the second floor, as our next phase – as we gradually move towards officially finishing in the basement. 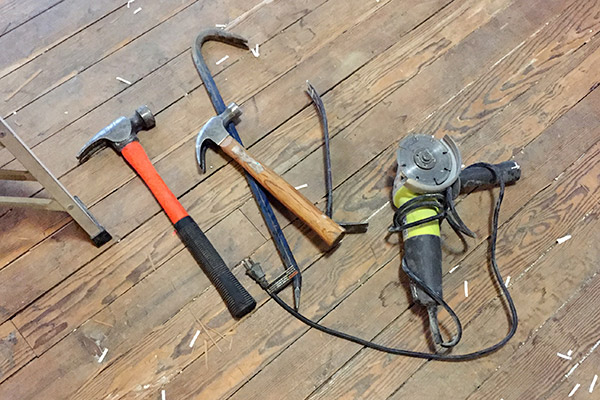 Some days, it’s nice to know that your one and only job is to break stuff. 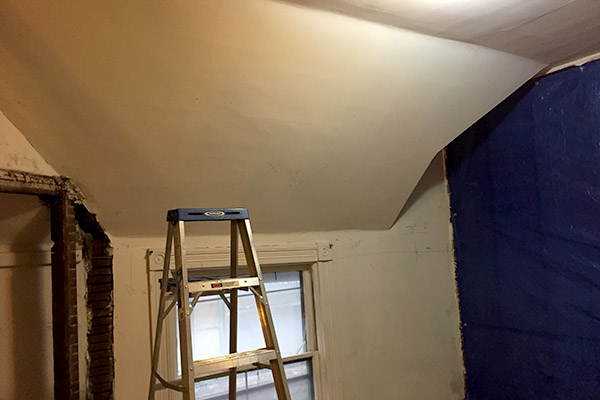 One of the areas on the list to demo. 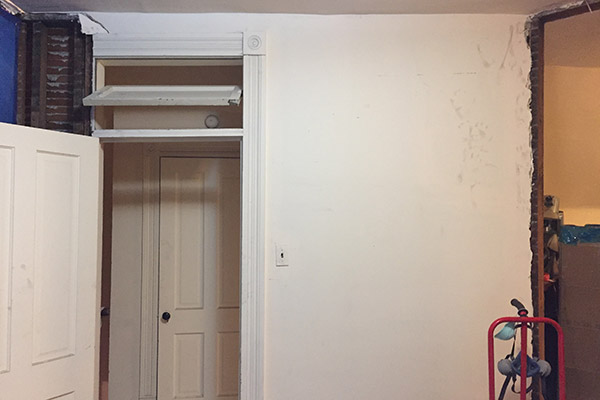 The wall by the door. 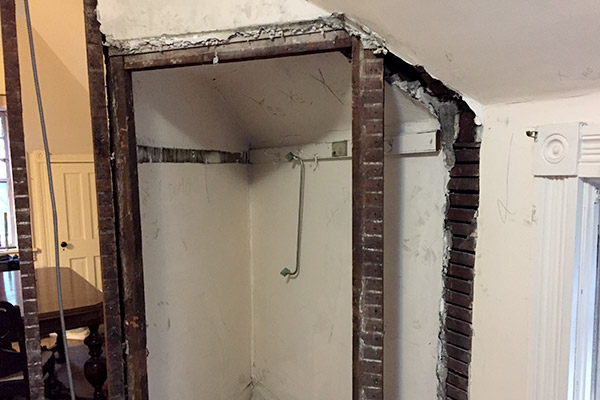 And also, finishing up this closet area. 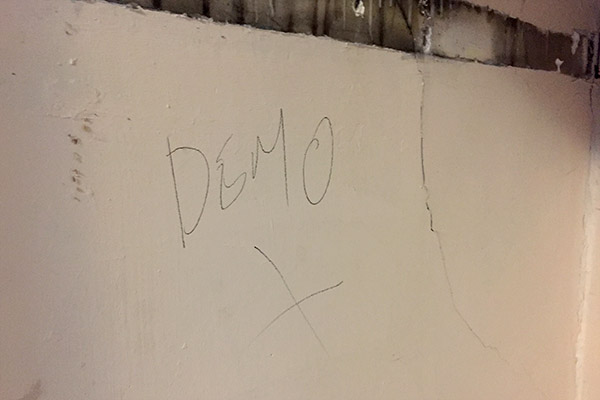 The plus with walls you’re going to take down – it’s totally ok to write on them. 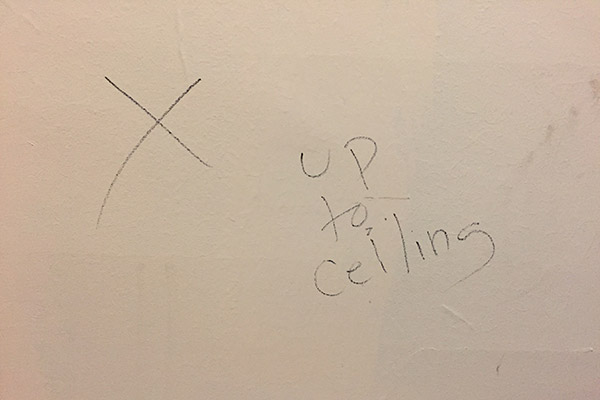 Though, I did get a little confused as to the “X.” For woodworking, I learned from Bob to mark the cutoff/discard pieces with an “X” – meaning, it symbolizes the thing you are not supposed to use.

We had a few areas on the wall that used the “X” to warn away from demo. So it got a little confusing.

We also learned from Bob that in the trades, they use a color system to tell the demo guys which walls get taken down. Green for the walls they are to demo, red for the ones they leave alone. In Bob’s words: “Green means go.” 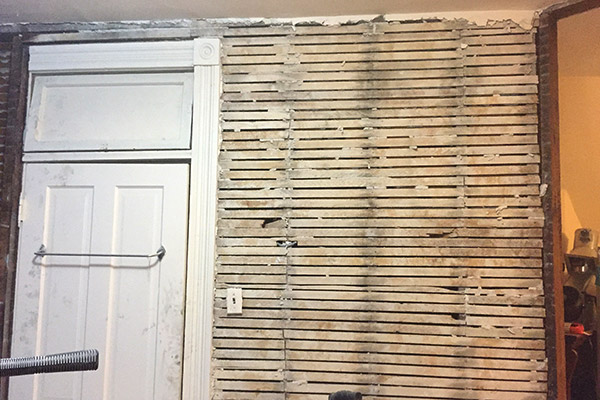 Progress along the south wall in the guest room. 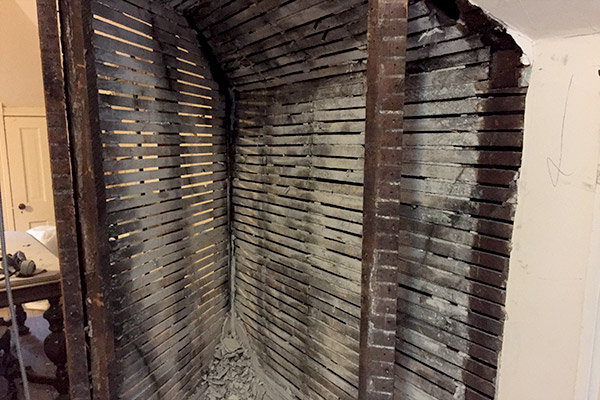 The closet, cleared. Eventually, this will go away 100%.

On the schedule today: a supply run at Home Depot with Bob (around 2-3PM), and also the arrival of Mick the bunny rabbit. Given the tight deadlines, I opted to just try to demo as much as I could, getting the dusty work out of the way. Figuring… I could always tackle the lathe later. 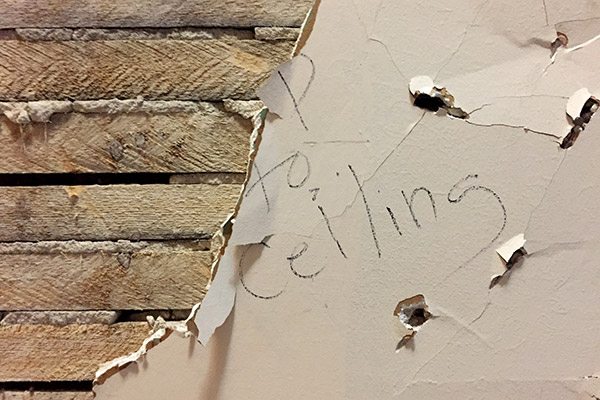 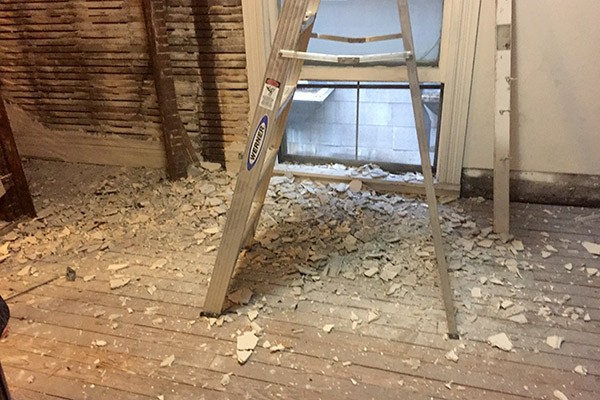 I’ll tell you what – the hardest part of demo isn’t the actual demo. That part is just banging a hammer and sliding off plaster/drywall. No, the hardest part is gathering up all the debris, and hauling it outside. More than anything else, that particular task wore out my arms the most. 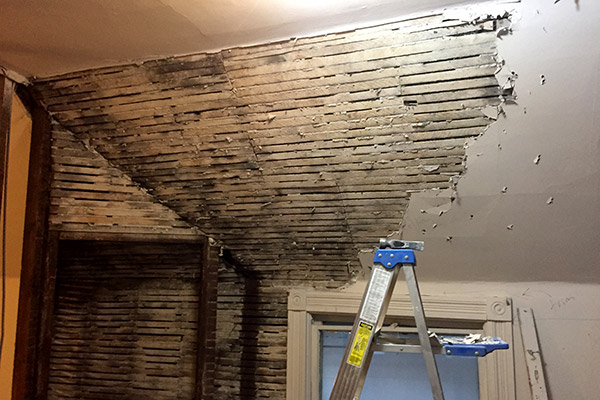 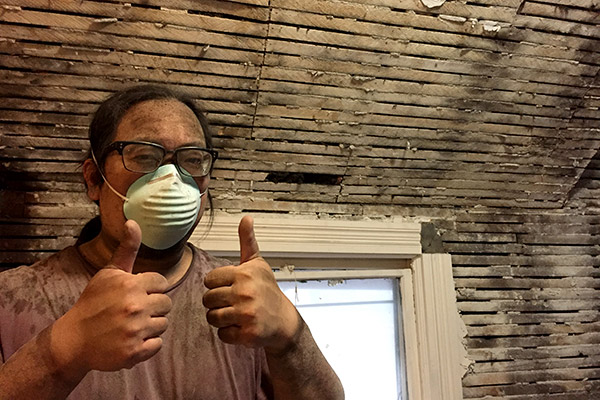 When Liz arrived home, she was taken aback at how dirty I had gotten. Here’s a little photo of me she took. 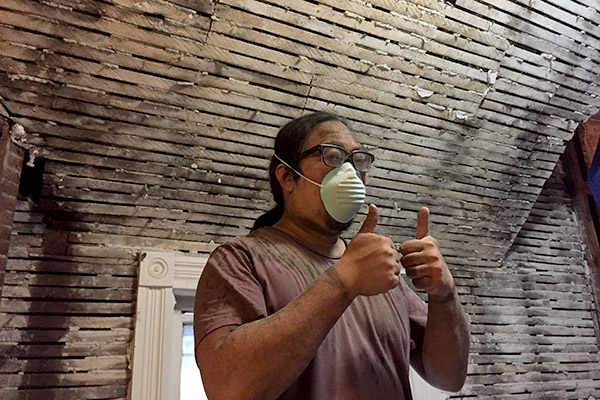 Same location, slightly different angle – to show off the wall behind me.

With all the work happening in the guest and master bedroom, Liz had to move all her sewing stuff into the (future) office.

I didn’t plan on all the dust getting over into this room. Which I really should have expected, since you know… there’s no wall here.

Had I been in less of a rush, I would have moved the blue tarp, and tried to isolate the office a little more. Whoops. 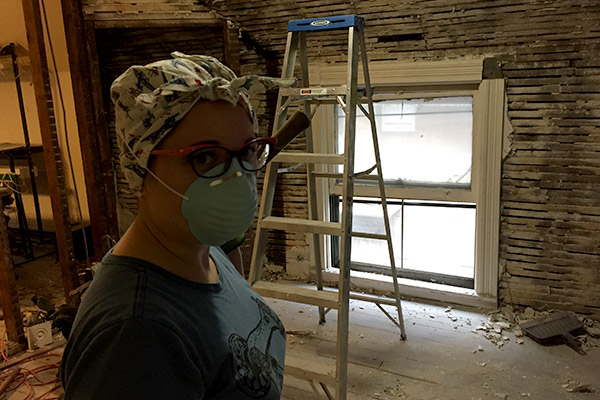 As luck would have it, Bob had to cancel our Home Depot supply run. Which worked out well for me, since that meant I could take a little more time with things. When Liz got home (from a hair appointment no less), she immediately suited up and got to work. 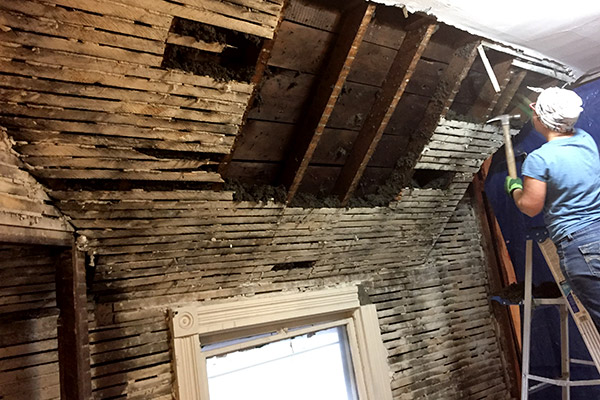 And let me tell you – it was filthy, gross, dirty work! She started to take out a lot of the lathe in the guest bedroom overhang… but a lot of the old attic insulation had slipped down here. 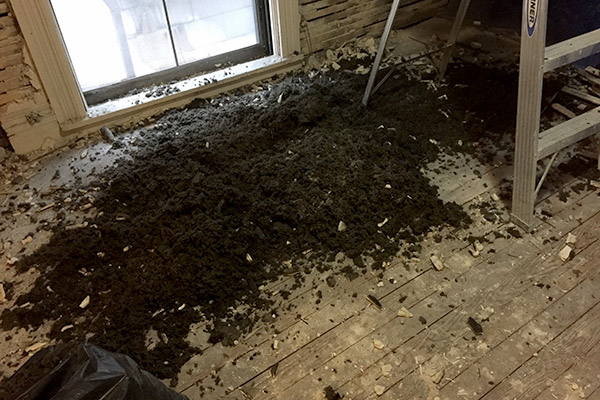 Funny thing – when I saw this stuff on the floor, my first remark was “Hello there, old friend.”

I’ve spent a great deal of time cleaning up all that grossness in the attic, and seeing this again reminded me of being up there and listening to the Serial podcast, getting dirty and covered in muck.

If you want to see more of what I’m talking about, check out the attic archives. 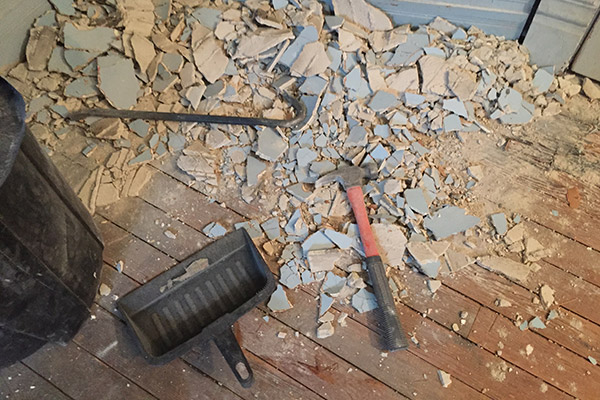 While Liz was in the guest room, I started in on the master bedroom walls. 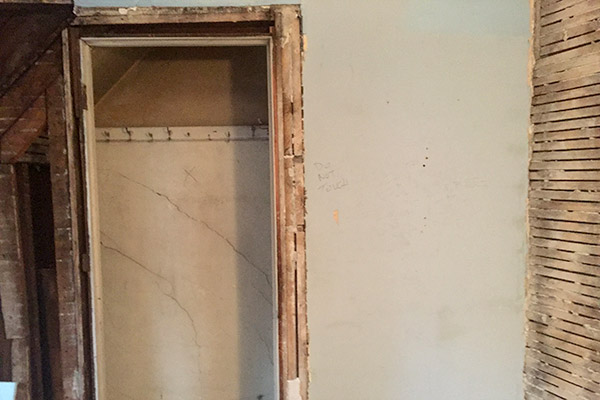 The plan is to remove this little closet bump, and connect it to the bedroom on the other side. The larger goal is to eventually get rid of that other bedroom, turning half of it into a walk-in closet, and using the other half to extend the bathroom. 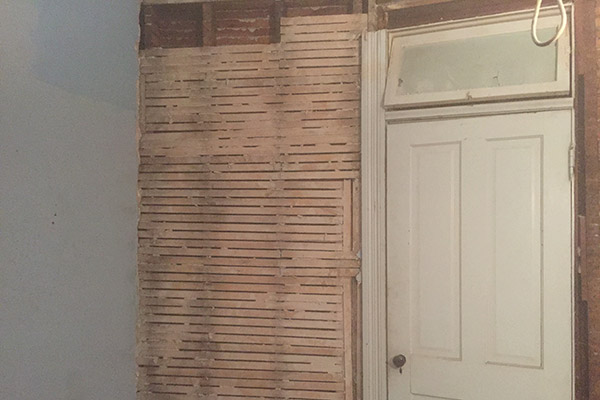 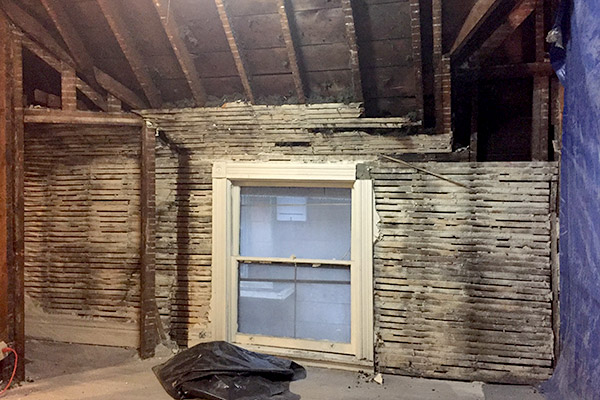 Circa 5PM, when we had to call it quits. While Liz showered and cleaned up the downstairs area for our bunny lodger, I moved the last of the bags of plaster and drywall out to the porch. 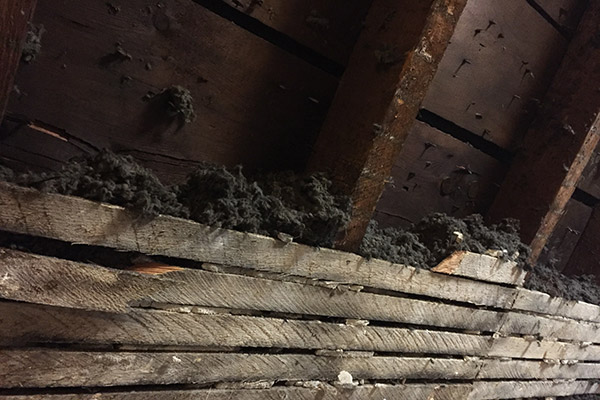 That gross attic insulation. When we pull the rest of the lathe, it’s going to get dirty. 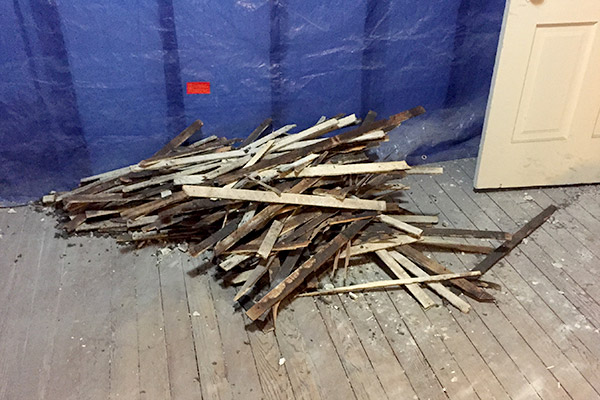 Not as much lathe as I expected. Looks like we’ll be getting another Bagster soon. 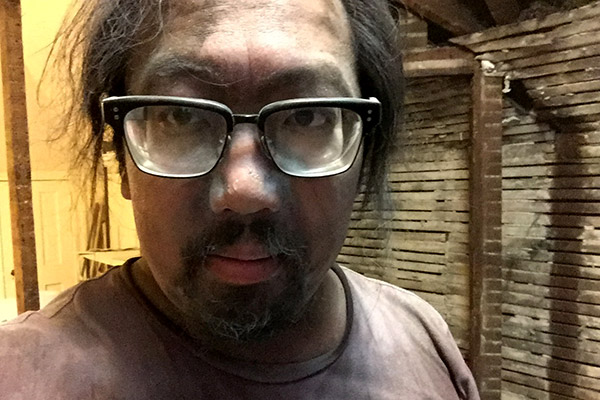 Selfie, at the end of the day. Liz tells me that the lighting here is deceptive, as I looked more like a Victorian era chimneysweep. 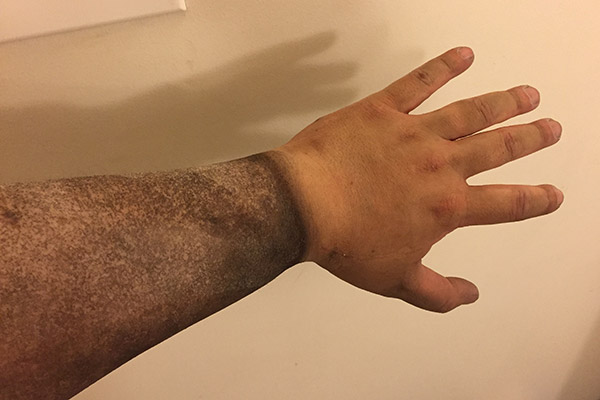 About to go and take a shower. Always wondered how I’d look with tatoo sleeves.