Distracted in the Lobby at Work

There’s a large TV (perhaps more accurately, a large
series of TVs) in the lobby of the building where I work. Normally, it’s tuned to a news channel or sports. The sound is somewhat quiet, but it’s on most of the time. 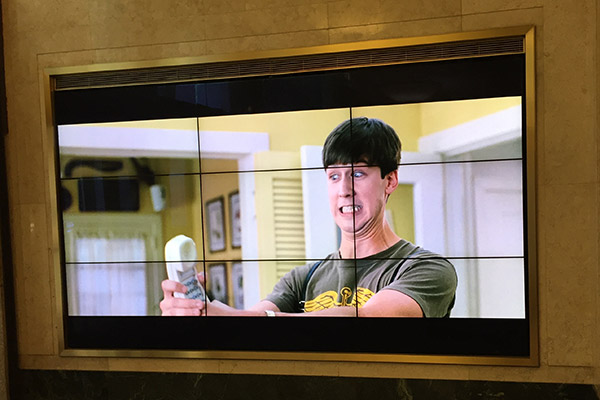 A week or so back, I walked in to work and saw Ferris Bueller’s Day Off was playing! A great movie, of course. But it felt a little mean to have this playing, while everyone had to walk past and head in to work.

I lingered for a while, as the movie was right at the scene with the phone call to Principal Rooney.

Liz and I have a kind of inside joke about this scene, revolving around the moment where Grace (played by Edie McClurg) imitates Rooney, and then whispers “Ed! Ed!”

I think at one point, I made some kind of groan – and Liz joked about how I sounded like Grace from the movie. From that point on, whenever one of us groans about something, it will trigger the other person to echo back with a sarcastic groan – followed shortly by an exclamation of “Ed! Ed!”

In the lobby, I waited around for a few minutes to get to that particular scene. Because I wanted to record it, and send it to Liz – who I knew would find it hilarious.

As folks walked by, I became pretty self-conscious. I wondered if co-workers noticed me standing there (it was after 9AM), late for work, recording a scene from Ferris Bueller on my phone.

Little did they know that I could have stayed down there all day.

on the way to work
« Hair, Here
Circular Reference »