Big day today. Liz and I both were up pretty early for a Saturday morning. We got some horses and drywall moved down to the first floor for Liz, and I headed out to a dentist appointment.

When I got back a few hours later, Liz had already put up visqueen in the closet area… and measured/affixed nearly all the pieces of drywall, lining the closet.

After a bit of coffee, we headed off to Home Depot together, to get more supplies. 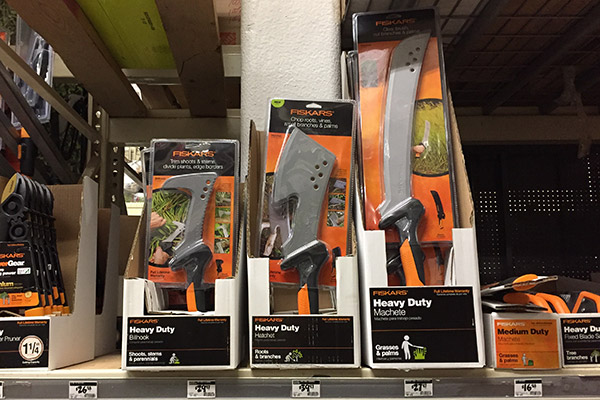 Something I learned today: you can buy machetes at Home Depot. I remain convinced that this is pretty much the first stop you need to make, if there’s ever a zombie infestation. 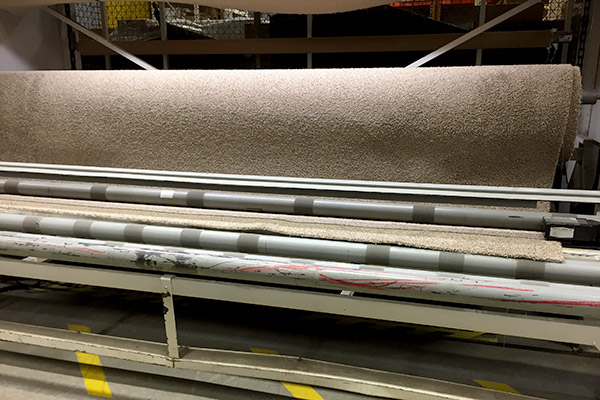 Of the many things we picked up, we got a big roll of carpet as well for the main hall area. Funny thing: we’ve done this before.

What I didn’t remember: Home Depot sells this carpeting in 12 foot lengths. They won’t custom cut anything outside of the 12′ portions, but the guys at the store were super helpful.

We ended up getting a 12′ x 10′, and unrolled the whole thing, then re-rolled it so it was only 10′ long. We’ve found that our car can deal with 10′ lengths, without us needing to strap anything to the roof or having to leave the trunk open. 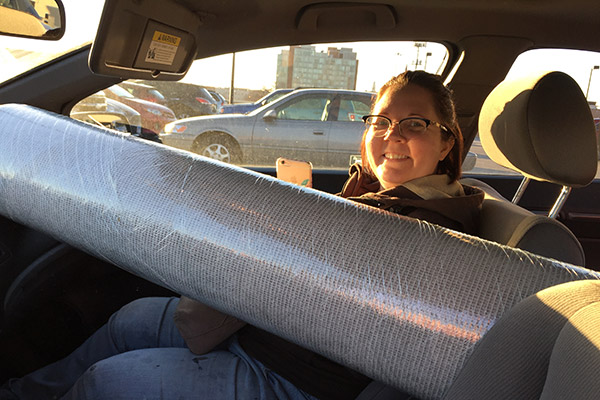 It does get a bit tight, though. 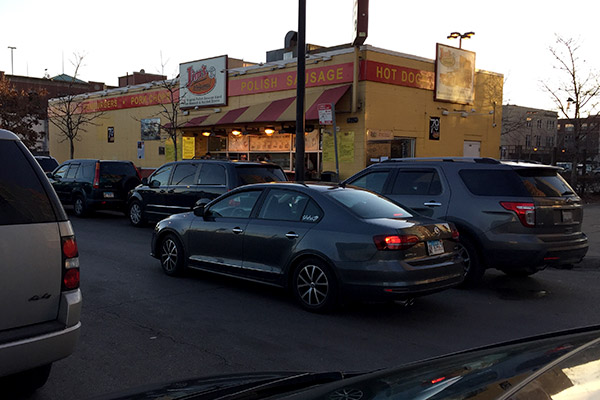 We stopped for a late lunch at Jim’s Original – some place I had first gone to with Bob, many years ago (and hadn’t returned since). It’s a temptation now, since we pass this on our way home from Home Depot. 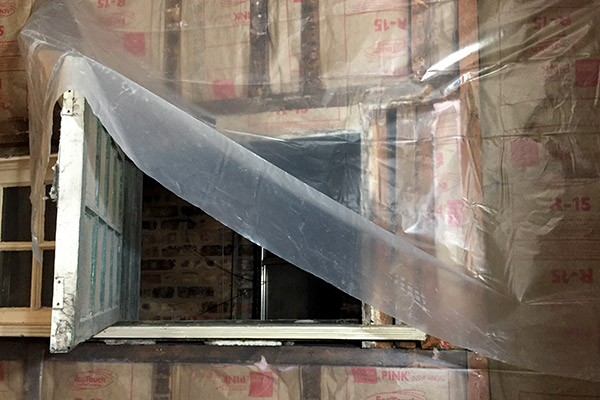 Back home, opening up one of the windows that used to be in the (now demo-ed) closet. 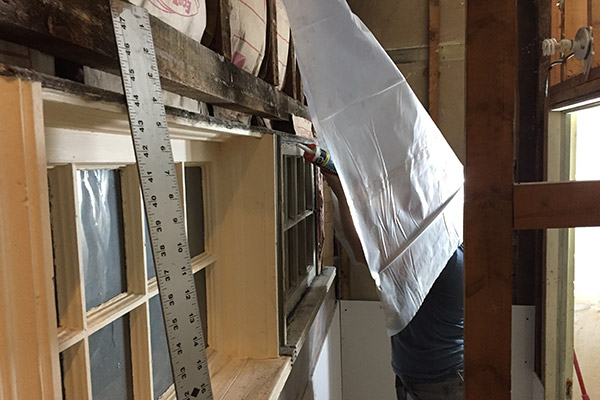 Liz, caulking up the window. 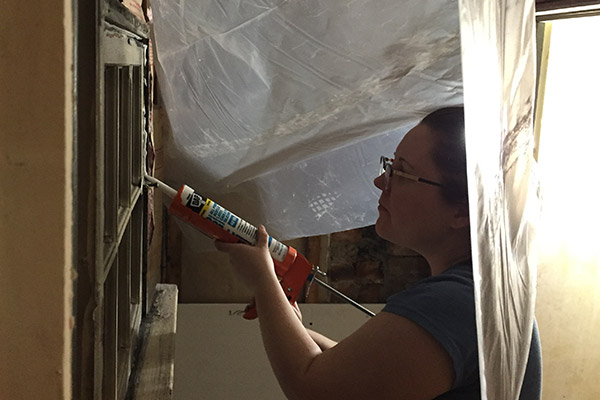 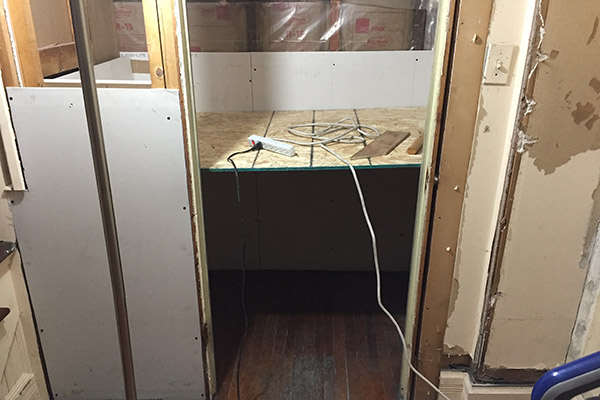 One of my tasks was to put up a roof, over the bunny area. Which I… mostly succeded at. Before the drywall was installed against the stairs, I had a laser level set up… and installed several blocks for the board to rest on.

It looked a bit wonky to me, but I opted to trust the laser line. In hindsight, I should have gotten a level and verified things first.

Then, after making my measurements, I cut some plywood in the basement. Did a few dry fits, and found a few places that were catching – so I had to revisit things and try to get the board down. 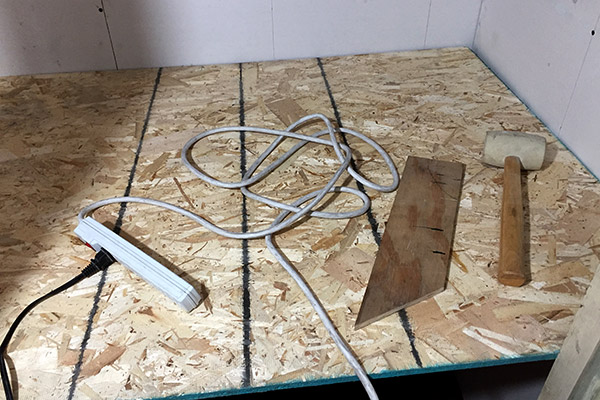 Which I eventually did, with the help of a mallet.

Liz pointed out to me that while my measurements were accurate, they also pre-supposed that some of my corners were perfect 90’s. Which they really weren’t – so I was working more with a trapezoid vs a rectangle. 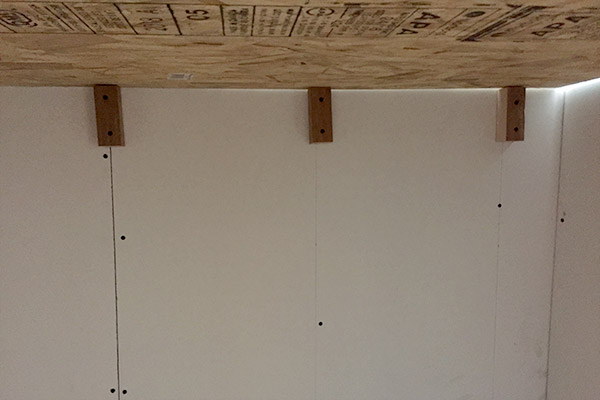 Underview. Try to ignore the huge gap over there, on the right.

Ultimately, the roof here was to give the bunnies a little shade/darkness, and to also help catch any potential debris that might fall from above. It’s a temporary thing, and more or less serves its purpose, no matter how slated it might be.

Long day, today. We didn’t end up finishing until around 9:30 PM or so. There was a lot of sweeping and mopping of floors. And someone (me) might have accidentally spilled a bucket full of water in the kitchen during the whole mopping portion of the evening. So we also kind of cleaned the kitchen, too.