Congratulations, Mick: The Oldest, Living Bunny Rabbit in the World! 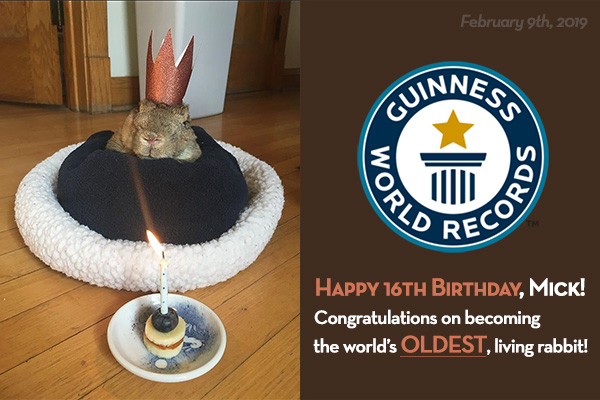 I’m excited to announce that I heard from Liz Rench that Mick’s application to the Guinness Book of World Records was approved. And that he is officially the “World’s Oldest, Living Rabbit!”

Mick’s birthday was a few weeks ago, on February 9th, when he turned 16. Before Mick, the oldest rabbit was 15. The official certificate is on the way, but the announcement of the news is on Instagram.

Liz and I have looked after our share of older rabbits, and have become accustomed to dispensing a daily regimen of meds. We were very flattered that we were trusted to care after Mick on a few occasions, when he stayed over at our place.

We knew he was up their in years, but had no idea he was such a celebrity. I think the Energizer people need to know they’ve got a new mascot.