Brunch at the Baked Apple

Liz and I met up with Michelle and Mike and Fritz for another weekend brunch. This time, we ventured out to Downers Grove and tried out a place called The Baked Apple.

The place was getting pretty full when we arrived, and we put our names in to ensure a table. After waiting a while, we got seated near the back and were given what felt like a ridiculously large amount of room. While other parties of six were crowded around two tables, we got two tables to ourselves (for just the four [and a half] of us). 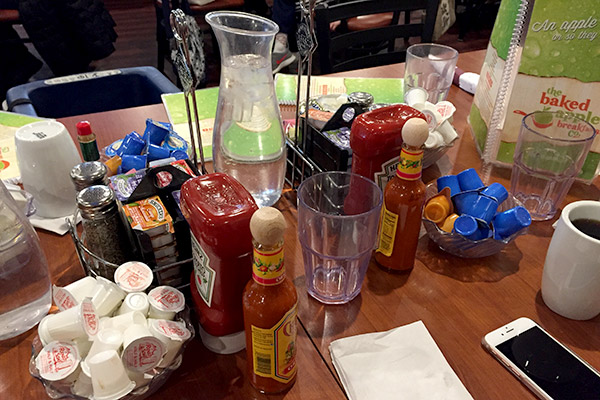 Also, the tables were loaded to the gills with condiments. This is what the tables looked like when we sat down. The only thing that wasn’t here when we arrived was the coffee in the coffee mugs. It was a well-stocked situation.

It was a tough thing, eating out while on a diet. The kicker was that for nearly all the entrees they had, pretty much every single one came with a complimentary side of pancakes. We couldn’t really substitute anything else either, as fruit is technically off limits. And neither of us liked cottage cheese.

I ended up getting a sausage omelette (with a side of sausage). Hey, technically I’m not breaking the diet… though it’s probably a bit fattier than is allowed. But it definitely felt indulgent.

Interesting realization: I tried a bit of tabasco with my eggs. I’ve done it in the past, but the tang of vinegar in the hot sauce actually seemed a bit sweet. After avoiding any kind of sugar for a week now, I feel like anything in the neighborhood tastes like sugar. It was surprisingly nice. 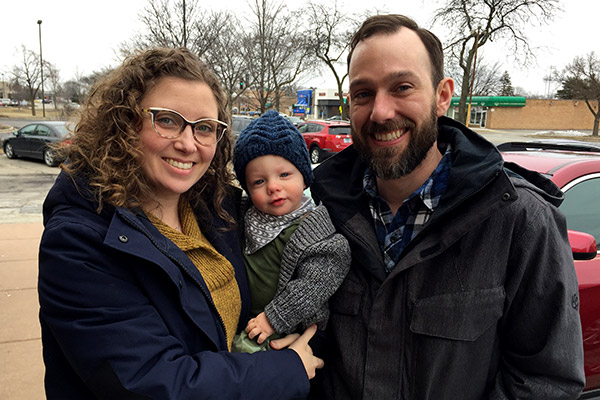 It was lovely as always to see Mike and Michelle and Fritz, and to catch up a bit. Doing the occasional brunch is a nice routine, and also a nice excuse to try out new places. Here’s hoping that maybe, next time, pancakes might be back on the menu.

After our brunch, Liz and I ran a ton (a TON) of errands. We did returns at two different places in a nearby mall, did our grocery shopping for the week, stopped at a Jo-Ann Fabrics, then stopped at a Home Depot. Then we got home, unloaded, and cooked up some soup and food for the week.

We left the house around 8:45 AM, and I don’t think we really stopped until maybe 8:30 or so at night, when all was said and done. Long, long day.

Related:
Pancakes and Dinosaurs
Brunch with Michelle, Mike, and Fritz

fritzmichellemike u
« Late February
Down Four »