This is Not the Felix Jung You Are Looking For

Lately, I’ve gotten more emails that were meant to be for some other (assuming German) Felix Jung. It happens often to me, as my email is felixjung@gmail.com, but Gmail ignores any kind of special character in the email address.

So emails like f.e.l.i.x.j.u.n.g@gmail.com will arrive in my Inbox. And more often than not, I’ll get emails that are addressed to felix.jung@gmail.com, and it’s definitely for some other Felix.

Sometimes it’s a password reset. Sometimes it’s PDF or Word docs. This week, I got sent a few baby photos, which were very cute – but definitely not someone I know. If it’s a login or automated thing, I usually ignore and delete those emails. But if I can tell it’s a document that seems intended for that other Felix, I have a handy TextExpander snippet that I saved just for these occasions (it’s happened often enough that a shortcut makes sense). 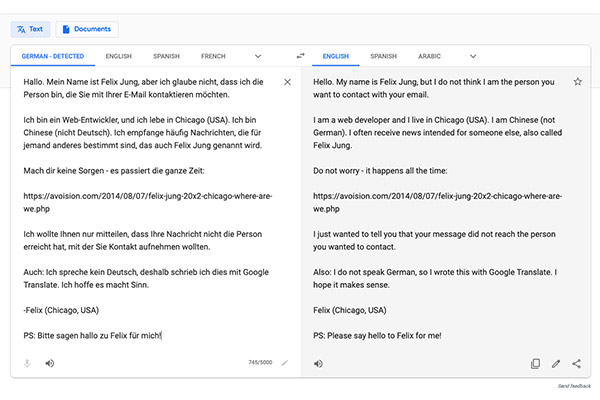 For me, I type in ffelix and it kicks out this message I had written a while ago, using Google Translate.

Hopefully it’s a silly message, and doesn’t come across as weird or creepy. I feel odd having received someone else’s baby photos, as it’s a private thing that I just stumbled into. But sending back that generic reply made sense to me, as there’s a Felix Jung out there that didn’t get to see those photos (and really should).

felixtextexpander
« Pac-Man: The Untold Story of How We Really Played The Game
I Got a Free Jimmy John’s Sandwich Thanks to Steve Aoki »