While portfolios are oftentimes a common topic of many Pecha Kucha talks, you shouldn’t feel like you need one in order to participate. People have chosen to share stories, hobbies, focused on an individual person or location, a particular creative project… it doesn’t really matter what your topic is at Pecha Kucha, so long as it’s something that’s of deep and sincere interest to you.

Remember that this is a fun project, and that you’re volunteering your time. If you’re not into the subject matter to begin with, you’ve just gone and made your job much, much harder, and unnecessarily so. If it’s not of interest to you, preparing for your talk will begin to resemble work – and nobody wants that.

In picking your subject matter, you should feel that you’ve got too much to say. If you find yourself struggling for material or trying to “make up” content to fill the void… well, you’re probably focusing on the wrong topic.

Here’s a good litmus test. Is the subject matter something you’ve argued passionately about with friends or colleagues? Have you stayed up late talking or thinking about it? If you were at a noisy bar, would you raise your voice to make a point on this topic? If you’ve answered yes, then you’re on the right track.

In the words of Pecha Kucha Chicago organizer Peter Exley, Pecha Kucha should be about “passion, not portfolio.” I think that’s a great insight, and a great rule for any talk.

Let me open by saying that I love computers, I love technology. But my recommendation to you, when starting your prep work, is to first look to low-tech tools: paper and pencil, notecards and paperclips.

The typical impulse will be to sit down at the computer and start designing out your slides. While this is definitely a fun portion of the process, I recommend that you fight this urge. The slides come after you’ve got an outline down. Know that if you start designing immediately, you risk wasting a great deal of time creating slides that may not end up in your presentation.

Me? I burned a lot of time at the computer, fiddling and tweaking. It was like spending time looking at paint samples when I hadn’t even figured out what kind of a house I wanted to build. It may feel good to just noodle around, but what you’re really doing is procrastinating the necessary first steps: getting an actual outline put together.

Maybe you’re more comfortable with capturing notes on a computer than I am. If that’s so, well then… more power to you. For me, I found that shifting to old school notecards and paperclips helped tremendously. I made a few attempts creating lists with text files and all that… and found that with actual notecards, I got an outline together pretty quickly.

I’d recommend working at a large table. The more room you have to spread out, the better. Having some music and a glass of water nearby doesn’t hurt, either. 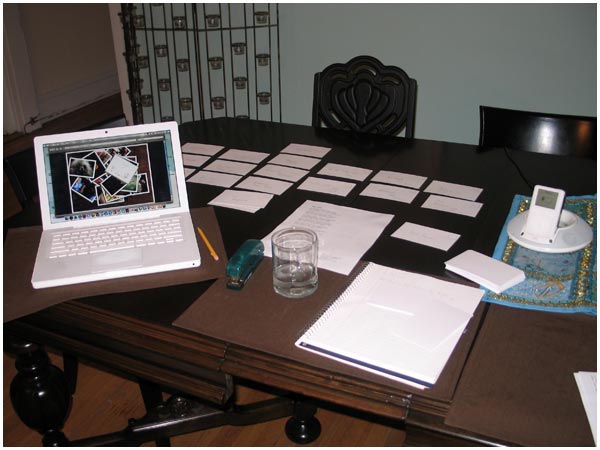 For five minutes, sit down with your notecards and try to capture everything that comes to mind. Write down any topic or keyword, one per notecard. This can take any shape you want – a concept, a phrase, a particular photo or image that you’re thinking about.

Don’t bother counting your cards. Just concentrate on capturing every idea, and jot everything down. Write as much as you want, and just go until you run out of words. Don’t worry about organization (we’ll tackle that next), as this is the “brain dump” portion of the process. The goal here is to get as many ideas out of your head, and onto paper, as possible.

Now that you’ve got a large set of cards, you can easily do some organizing. First step? Group similar cards together. Break out some paper clips or rubber bands at this point, and match up similar cards that touch on the same idea or theme.

After you group your cards together, see if any group or set stand out. The more cards you have in a stack, the more you may have to say on that particular topic. If you’ve got an individual stack of 20 or more… you’re in luck! Maybe your entire presentation is somewhere inside that one stack.

After your cards are grouped, look through each one. As you examine them individually… are there doubles? Can you get rid of this card? With each one, ask yourself: Do I want to spend time talking about this particular idea/example? If you pause or are unsure, put that card in a “discard” pile.

The final goal here is to have 20 separate cards or groups of cards (one for each slide you’ll design). Once you have a group of 20, start moving them around and see if a particular sequence arises.

As you shift the cards around, you’ll start to see some underlying themes emerge. Certain groups of cards will make more sense next to others, and ever so slowly… a narrative will reveal itself.

I found that if I used three slides to touch on a particular idea, I had to be going at a pretty brisk pace. If I used five or more slides, it started to feel like a bit much (remember that 5 slides is technically 1/4 of your entire presentation).

Four slides felt, to me, just right. Enough to get into a particular story or idea, without feeling too rushed or too verbose.

Working on Pecha Kucha talks is a strange process. For most of us, the kinds of talks or presentations we do tend to revolve around gathering and organizing information we don’t have at hand. Think of an Economics class in high school, where you had to prepare a 5 minute speech on Supply and Demand. Lots of research, and a lot of information you needed to learn and memorize.

With your Pecha Kucha talk, the topic you’re discussing is something you already know, something you care about and have thought about a fair amount. The thing you’ll discover with prepping for Pecha Kucha is that it’s more about editing and deleting things, as opposed to coming up with new stuff.

Because the majority of your talk will be about things you know, revisions will actually be a synonym for deletion. As your organization process continues, you’ll start to see that there’s not all that much room after all. And as a result, only the good stuff should stay in.

I’ll touch on this during the Practicing phase, but I wanted to emphasize this point early on: just because your slides are in sequence, it doesn’t mean they have to be linear.

In fact, I would encourage you to leave gaps between your slides. Don’t worry so much about what you’ll say to transition from one slide to the next – time for that later on in the process. As you’ll see in the next sections, having places to pause in your talk, as well as having “jumps” between slides will actually work to your benefit.

Remember that we’re still in the notes and organization phase here. No need to stress yourself out trying to plan out the entire talk right now. At most, you should be looking for the loose threads that connect your cards together… and organize things accordingly. So long as those threads are there, you have a path (which you’ll better define later on).