Two Cops And A Little Dust 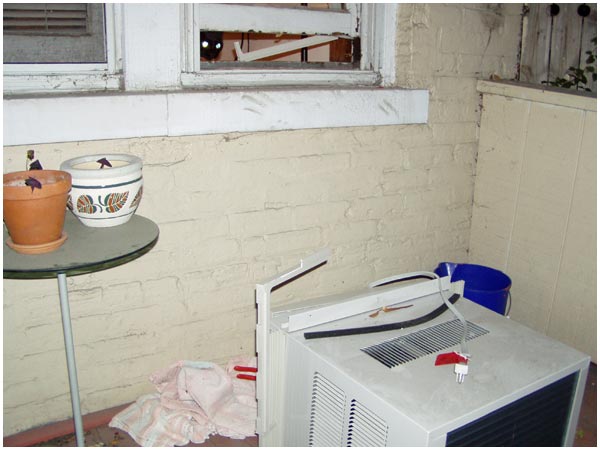 Here’s my AC, on the ground as I found it. No porch lights, so it’s all Flash. Note some of the smudges on the AC unit itself, as well as the finger smudges on the windowsill.

That’s Harmony, peeking out. It’s a complete wonder that she didn’t push through and bolt out of the window. I’m SO happy she decided to stick around. Losing my electronics is one thing, but losing my cat is something else entirely. :) 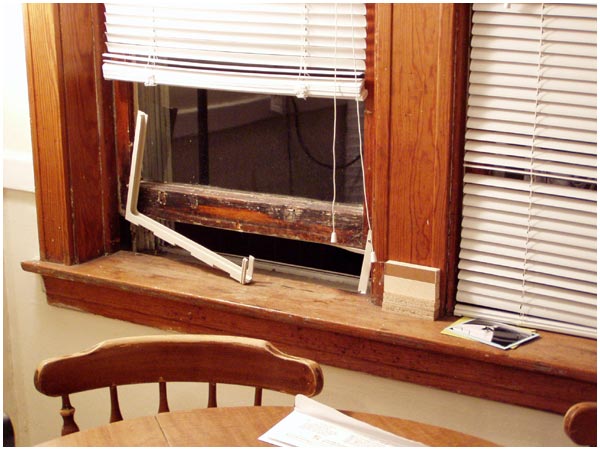 Interior shot of the window.

Because the door was locked different than how I normally lock it… my guess is this: there was more than one person involved. One person went in through the window, unlocked the door from the inside, let in the second person, and then shut the door – locking it again.

The fact that the door on the other side of the apartment (by the living room) was unlocked suggests to me that that’s where they exited.

I think I would have make a decent cop. 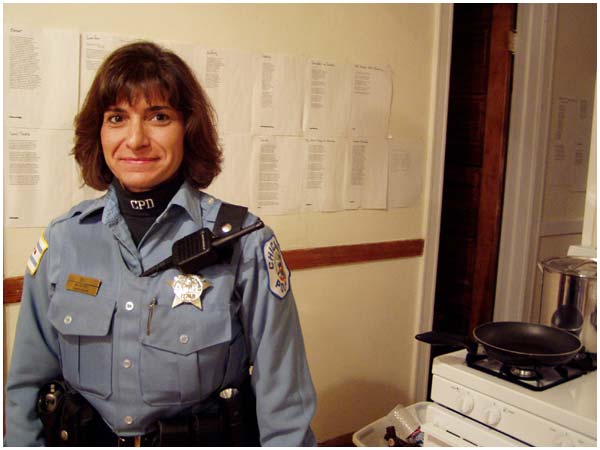 Here’s the first cop who took all my info, and wrote up the report. She was nice enough to let me take her picture and use it on the blog. When I asked if I could take her photo, she said "As long as I’m not doing anything illegal!"

She was nice. She even added an entry into the report that stated that one of my rental DVD’s was actually in the machine when it was stolen. Hopefully, it won’t come down to that, but I can use that if need be. 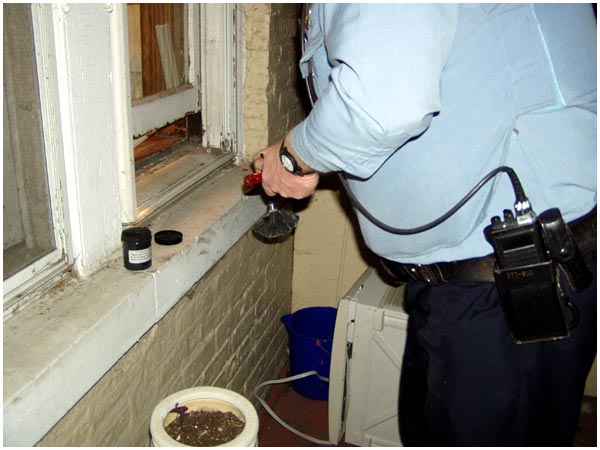 The ET (Evidence Technician) arrives, somewhere around 2 AM I think. I get his permission to take some shots as he’s working. He’s checking the sill, and turned the AC unit on its side to dust for prints.

Turns out, they used gloves. Unusual, according to him. He referred to the burglars as "sophomores." When I asked what he meant by that term, specifically, he expanded and said that he meant someone who had previously been caught for a similar crime and knew what to avoid. 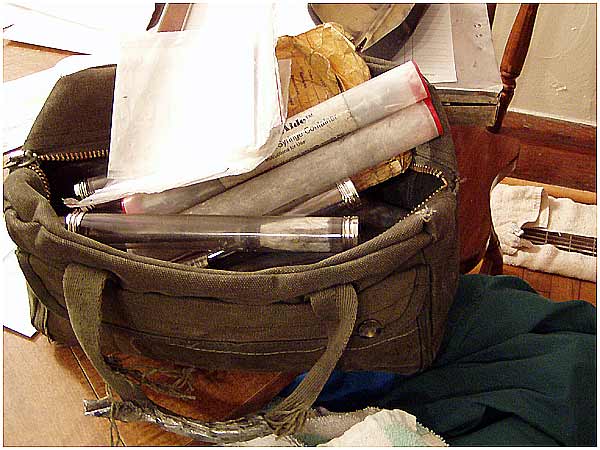 Tools of the trade. The bag, he informed me, was not standard issue.

After the fact, I’m looking at the frayed handles, and the amount of wear this thing has taken. That’s pretty darn cool.

One thing I learned almost immediately: you can’t pull fingerprints off a doorknob. You immediately smudge them once you turn the knob, so it’s no good! 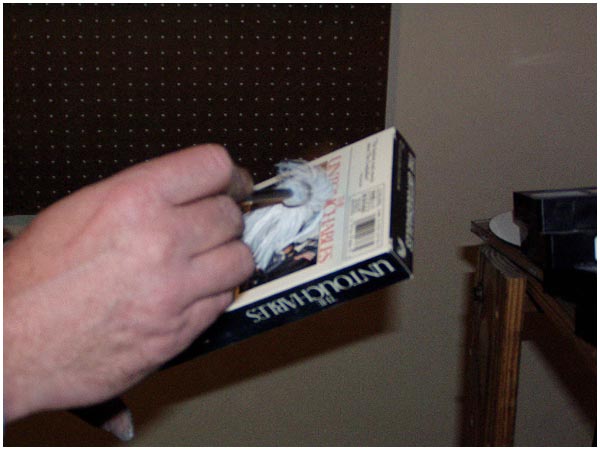 Dusting my copy of The Untouchables for prints.

One of the other movies he dusted was my copy of Hero. When he asked about the movie, I started telling him about it briefly, and asked if he had seen Crouching Tiger, Hidden Dragon. He claimed that he was married, and only got to see like 3 movies a year. :)

He mentioned once being really into Japanese flicks, and cited some series that involved a blind, female, japanese samurai called Crimson Bat. I found the fact that we were shooting the shit about movies really fascinating and cool, for some reason. 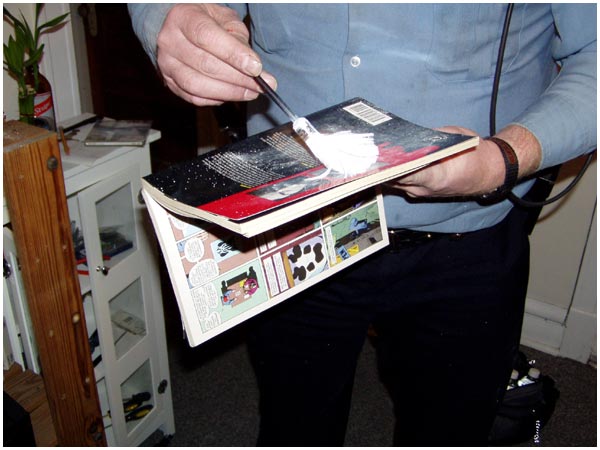 Dusting my copy of The Watchmen for prints. 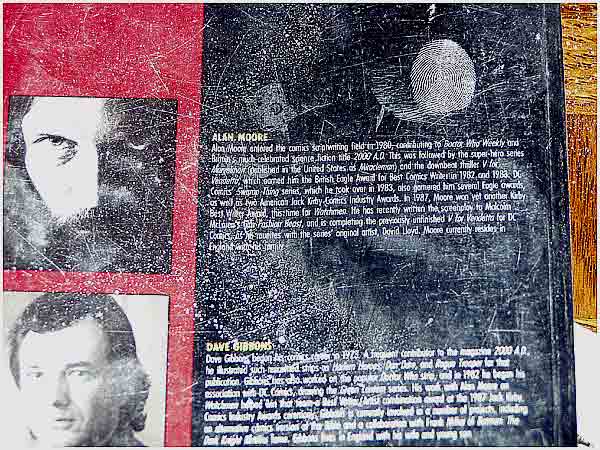 On the back cover of The Watchmen, the ET officer showed me what a perfect print looked like. This is his thumb, which he pressed into the book and then dusted. 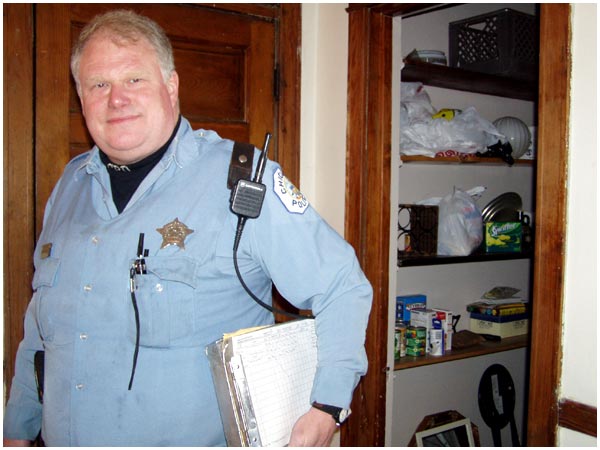 No luck on any prints. Had he found any good prints to use, he would have taken mine I think (so he could eliminate what was touched by me vs. anyone else). He was a super nice guy, who also didn’t mind me using his picture for my blog. He ever offered to sign a release!

He mentioned that this neighborhood was fairly "active," and that if you lived on the first floor around here… you’re gonna get hit. Living on a second or third floor reduced your chances of burglary by, as he put it, "an order of magnitude."

Call me a nerd, but ever since Real Genius, I’ve always liked that particular phrase.

Turns out, he had checked out a house somewhat nearby, about an hour ago. Since he does mainly burglaries… he talked about how he’s paranoid about it, and can only see houses in terms of ways people could potentially break in. One of the houses he had been in at some previous time was built by a fireman… and, based on the doors and windows in the place… apparently, all this fireman could think of was ways in which someone might get out of the residence.

He mentioned that some detectives would probably call me over the next five business days. At one time, he would have been able to tell me what was going on in the area; he also claimed that he might have even been able to recognize glove prints. But the ET officer is now "centralized," and is all over the place. He no longer had his "finger on the pulse of what’s going on."

I keep using "he" because I never got his name. Like the investingating officer before him, both held back any personal info. I tried shaking hands with the first officer and, while she shook my hand as I told her my name again, she kept quiet.

Both officers were really nice, and incredibly upbeat and pleasant to talk with. Maybe it was that I constantly expressed interest in what they were doing, and kept asking questions.

Anyhow. Perhaps that’s how I should be looking at this. Karma-wise.

I got to meet two very pleasant individuals later on in the day.

Things have a way of balancing out.

« On The Plus Side
Ranting »