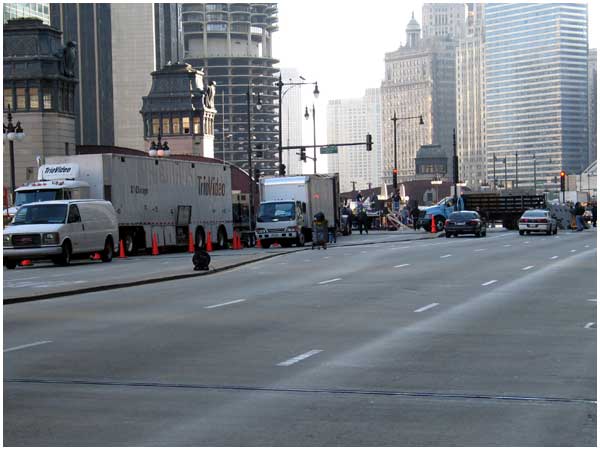 This was on my way in to work. Saw the area being set up. As it turns out, the final stopping point of the White Sox parade was Wacker and LaSalle, literally just one block over from where we work. 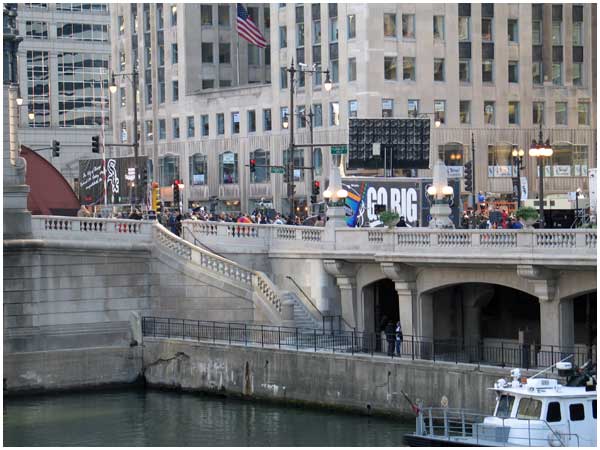 A little before noon, we all take a walk over to catch the “ticker tape” parade. Everyone goes, even Chris. 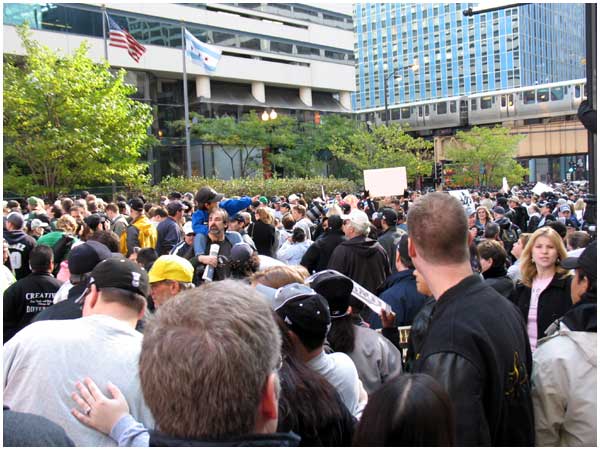 Mike and I got separated from the group, and ended up ducking through an alley, winding up on LaSalle, about half a block from the main stage. Everywhere around us – bodies packed up against one another. 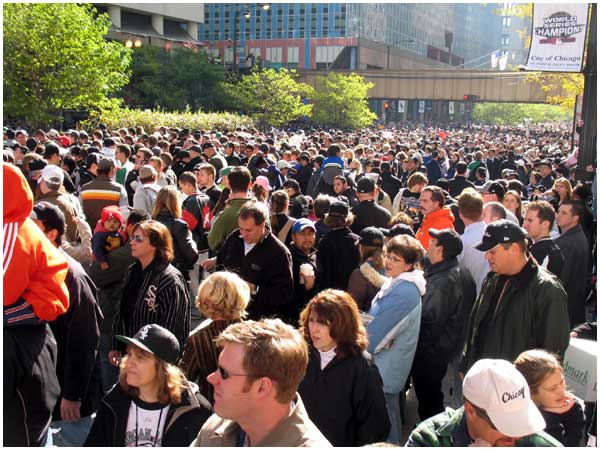 Behind where we were standing was this huge crane. There was one guy on there, whose job it was was to shoo people away who were trying to climb up to get a better view. I asked if he would take a snapshot of the crowd from his vantage point – and he agreed. Lots and lots and lots of people. 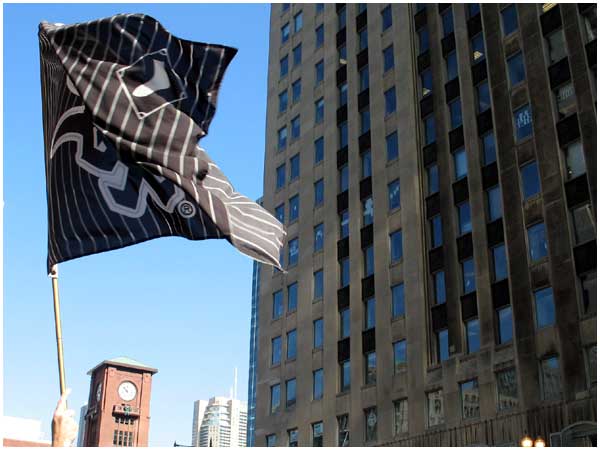 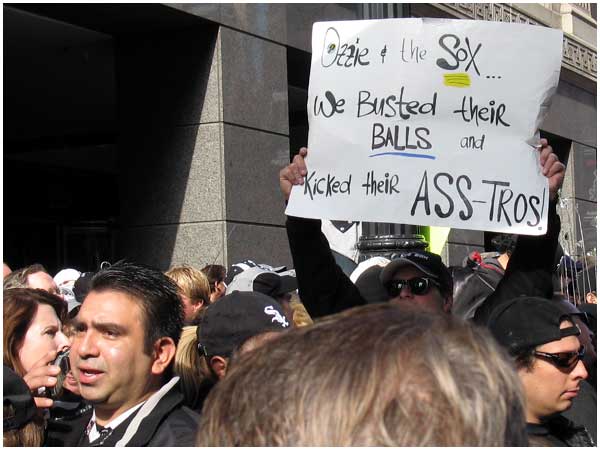 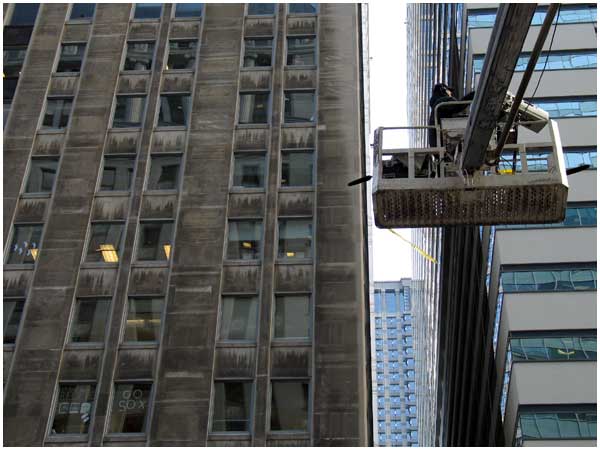 That crane I mentioned? On the other end was a guy and a TV camera, overlooking the street. 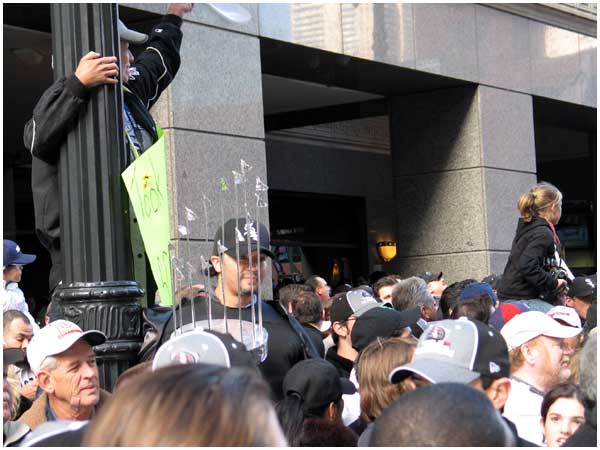 Tried getting both the guy with the homemade trophy and the girl clinging to the lightpole, whose sign read “Called in sick to work today – got White Sox Fever.” 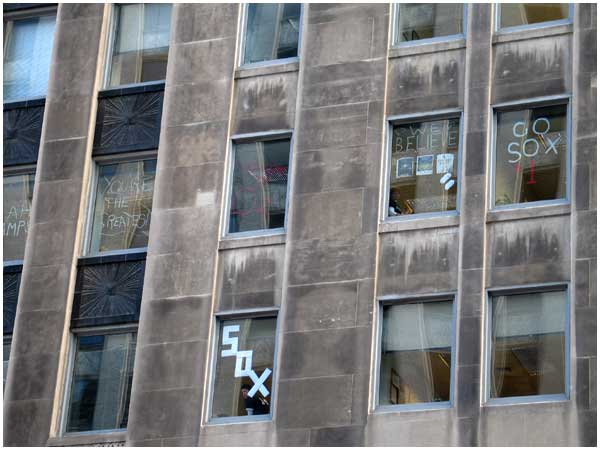 All the windows along LaSalle, decked out. 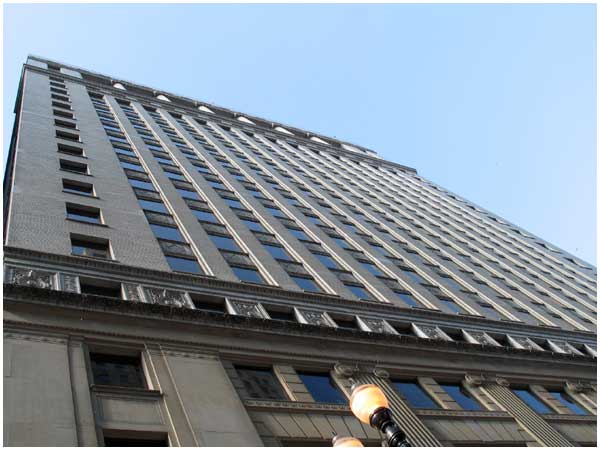 Trying to get a shot of some of the confetti cannons – but ended up getting a neat shot of this building instead. 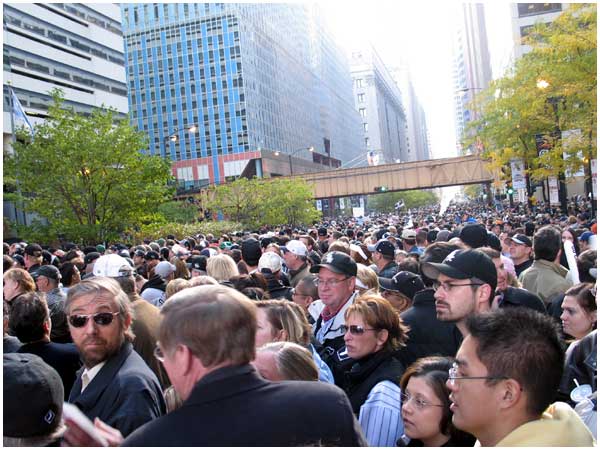 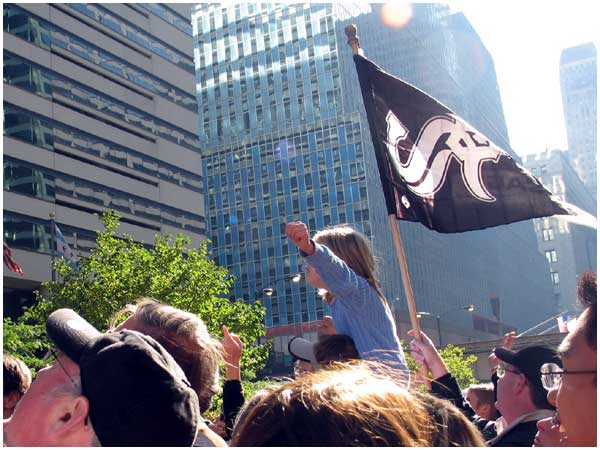 This little girl was cracking me up. Too cute! 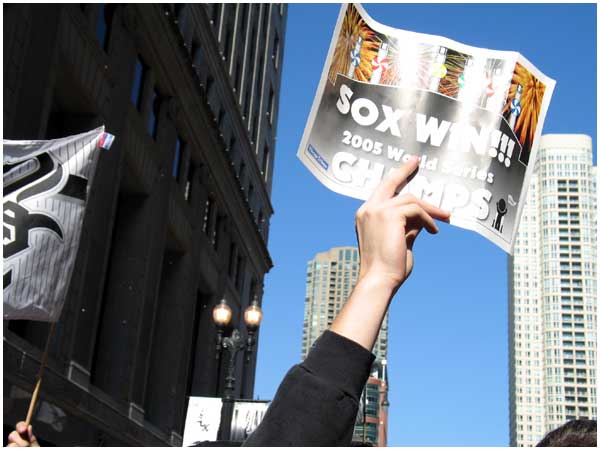 Signs and posters everywhere. I saw one guy shake a broom in the air. 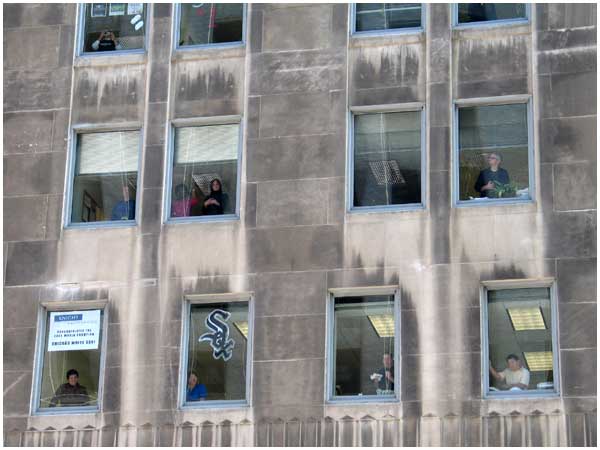 The windows across the street slowly fill. 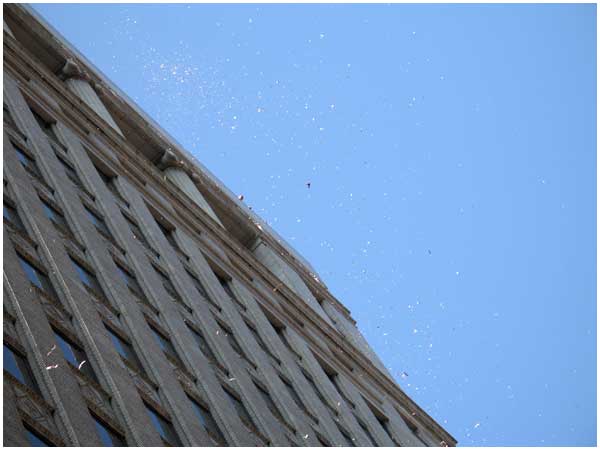 And so the ticker tape confetti starts to fall. I thought there were going to be cannons shooting this shit off, but it turned out to be all done by hand – people throwing big wads of shredded paper over the edge. 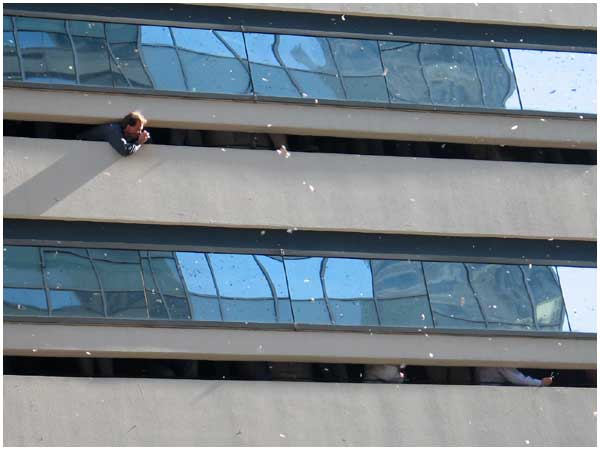 I think this was a parking garage across the way. You can see the lower half of bodies, but that’s about it. One adventurous guy leans out for a photo. 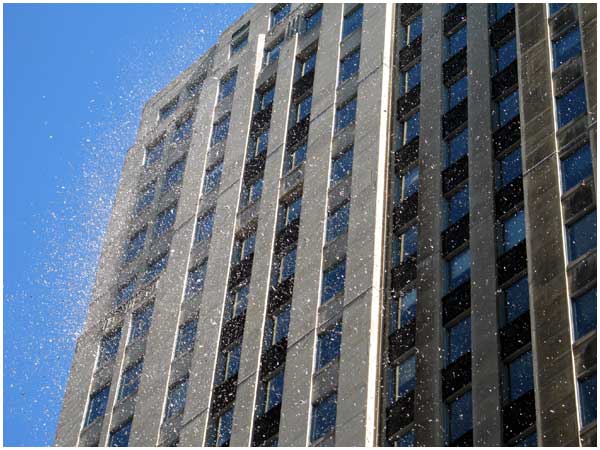 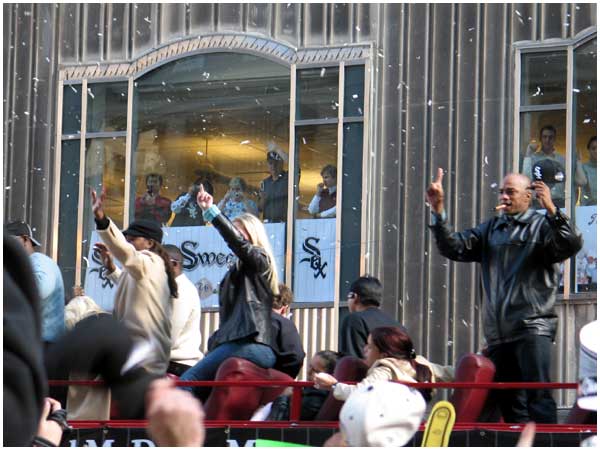 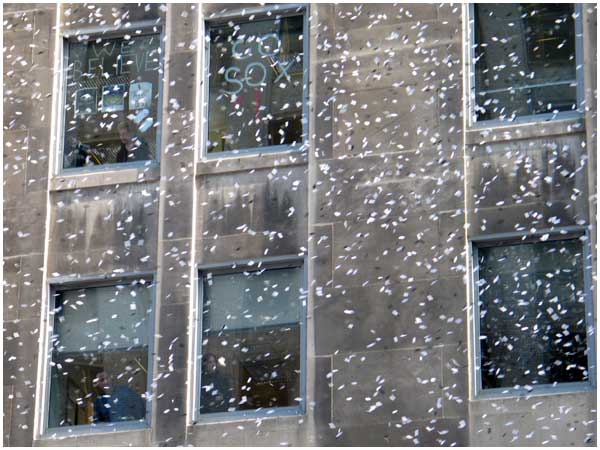 It starts to get a little crazy. 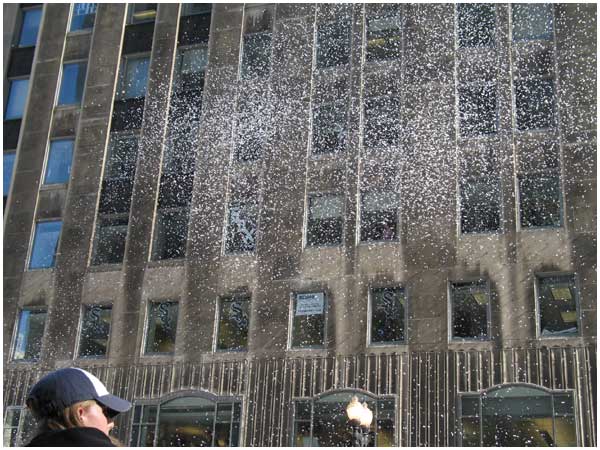 Believe it or not, some of these pieces were pretty big. I got donked in the head by one of them. 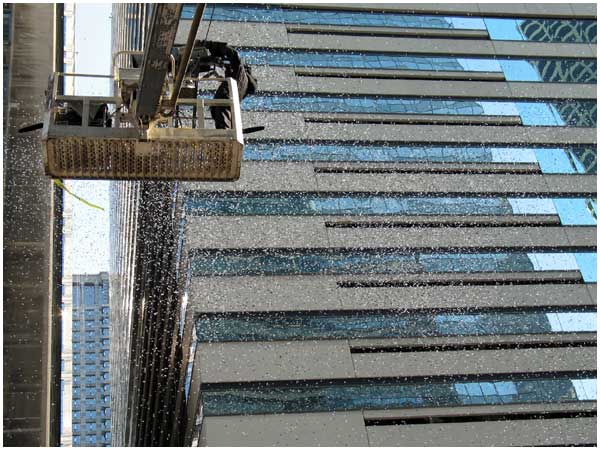 The cameraman, possibly wiping off the lens. 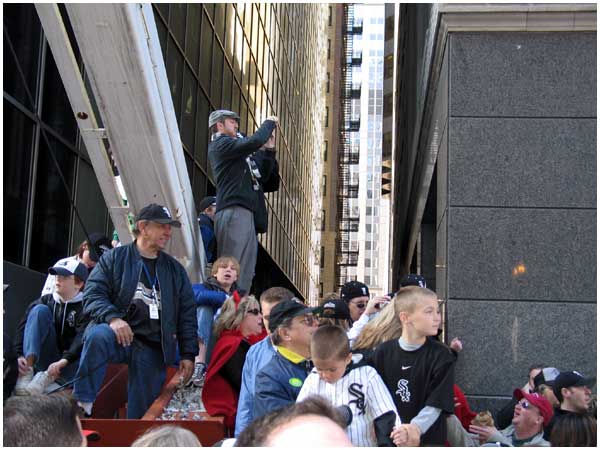 Remember that guy who was shoo-ing people off the crane, behind us? Well, looks like he gave up. 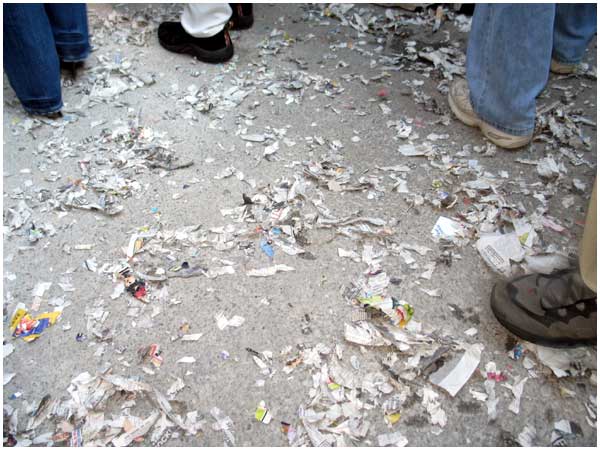 The street was a mess. 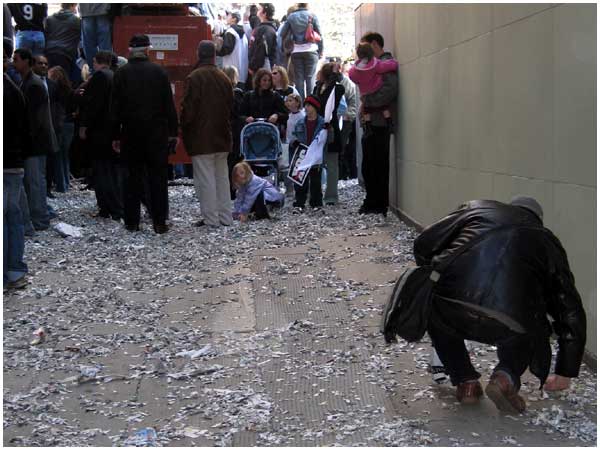 Some dude, picking up confetti as either a souvenier or for ebay. 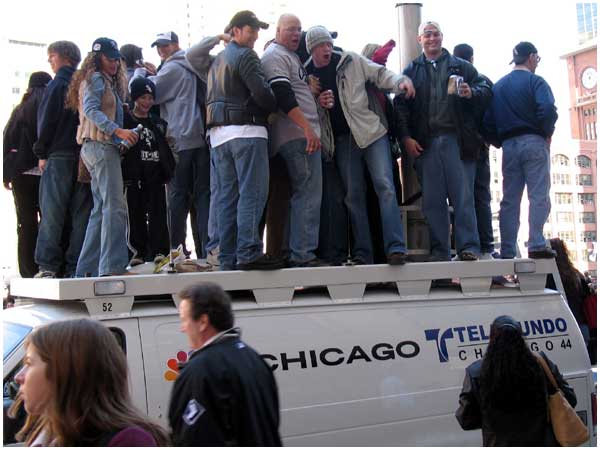 Walking back to work, we saw that almost every news van had people crowded on top. The cool thing? That woman and her son onthe left there? They were standing right next to me and Mike, on LaSalle. At one point, she had lifted her boy on top of her shoulders so he could see. Guess they found a better spot. 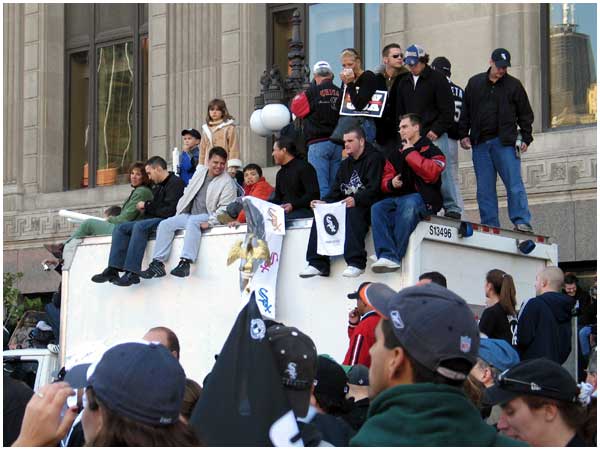 See what I mean about the vans? 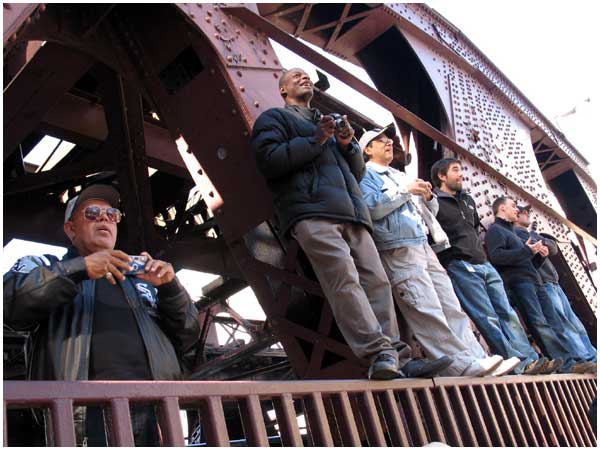 I’m kind of fond of this image. 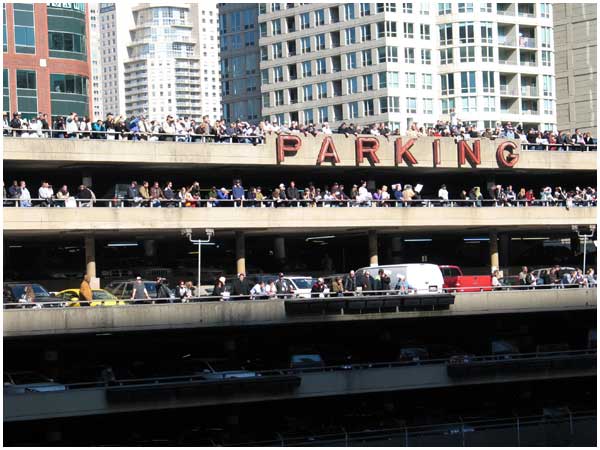 The parking garage across the river, filled with spectators.