After work today, Chris, Ben and I ended up playing a really fast game of Holdem. After Ben left (he was rushing to catch a train), Chris and I decided to play another game – just the two of us, heads-up style.

Only… we decide to spice it up a bit.

Remember all that Tequila we got? And remember that variation of Texas Holdem we called “Tequila Rules?” Well, Chris and I created something I’d like to call “Single Shot Texas Holdem.” 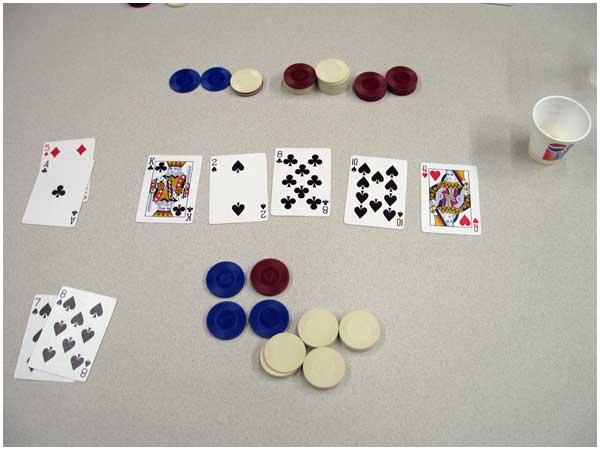 Basically, the concept is rather straightforward. Same rules as regular Texas Holdem, with the addition of one small shot glass in the middle (in this case, a tin, plastic Pepsi cup).

At any point in the betting process, one player can pour liquor into the shot glass which, in effect, is their bet. The other player(s) have the option to agree to the shot, raise, or fold. The person who loses the hand then ends up drinking the shot.

Keep in mind that anyone can add more liquor to the middle shot, in effect “raising” the stakes. This got to be an interesting variation that, let’s be honest, didn’t really help with our attempts to do math during the game.

Chris and I didn’t really end up drinking all that much. The shot in the middle was more for novelty than anything else. What I liked the most was us talking through our hands and, at those moments where someone folded… we’d flip the cards over and discuss strategy. I found this immensely enjoyable, and really liked hearing both Chris’ thought processes, as well as his takes on my particular plays.