During our errands last weekend, one of the places we stopped at was Michael’s (an arts/crafts chain store). There, Liz picked up a few cake-related items… specificallly: Fondant.

I had never really heard of Fondant before, but after seeing what it was (and a few examples), I recognized it. I naturally assumed it was icing of some kind, which I guess it sort of is. In looking over some examples in some of the reference books at the store, it was pretty amazing to see what you can make with Fondant. 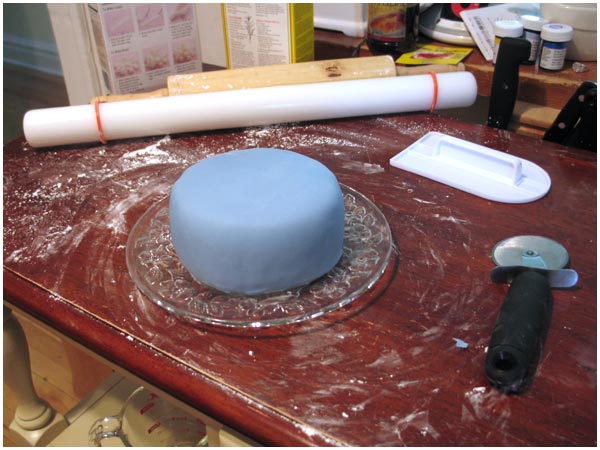 Liz’s first attempt at a Fondant cake. I was in the office for most of the day, working on my latest project, so I didn’t get any of the “before” shots. Suffice it to say, Liz was working a good while, kneading the Fondant and getting it blue.

FYI Fondant comes mostly in white, but you can add in whatever colors you want. To transform it though, there’s a lot of kneading and rolling to get the color to appear evenly. 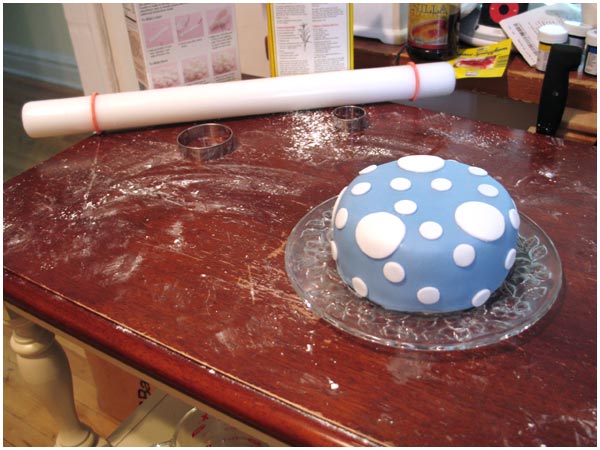 And the final product! Not too shabby for her first time.

So you all know, I’ve been stressing to Liz how supportive I am, with all this Fondant decorating. In fact, I’ve proposed that she have multiple cakes, maybe even one or two extras as “backup” cakes, just in case something goes wrong. One can never be too safe about these things.

I don’t think she bought the “backup” cake idea though, as she was giving me some funny looks. It might have been because of the fork in my hand.