We Have 100 Clients: A Small Story About a Small Company That’s Slowly Becoming Not-So-Small

At the start of this year, some 10+ months ago, I was in a very different mindset. At work, we were in the transitional phase between being a small company with a limited client list (Emmis)… to a rapidly growing company, taking on an ever-growing number of clients.

During that time, I found myself working in a Support role, helping to field some of the support cases that came through. We’d receive reports of a client with an issue, and it then became part of my job to determine whether it was a Design issue or a Development issue.

Prior to this time, we were a small group. And as such, we were nimble. If issues came up, we fixed them immediately. I enjoyed picking up the phone, and being able to resolve a problem right there on the spot. I prided myself on it, actually.

Being an instant problem solver for a small client list is fine… but I soon found that that approach simply doesn’t scale.

In talking with Marcel, he gave me a bit of perspective. On our client list at the time, we had about 20 stations in total. He told me to imagine beyond the present tense, to imagine that we had 100 stations on our servers – 100 clients, all dependent on our technology.

Given that, he told me to imagine a worst-case scenario in implementing an immediate fix on our platform. My impulse was to respond immediately to every issue, to go in directly onto the servers and make whatever fix we needed to resolve the issue.

1) The “fix” causes another issue to arise.
2) This new issue compounds, or causes the server to crash.
3) Our client sites go down.

A bit dramatic and unlikely, true. But the point is that any “quick fix” potentially leads to the aforementioned scenario. It dawned on me, after that chat with Marcel, that I was stuck in the mindset of a smaller company, with a smaller client list. It dawned on me that there were risks associated with my inclination for the “quick fix.” And that addressing an issue for a singular client could/should not outweigh the stability/environment for all of our clients.

This, I have to tell you, was a huge moment for me. It’s like living in a small town your whole life, and then you step off a bus in the middle of NYC and realize your perspective needs a little adjusting. My earlier mindset towards support and service got flipped on its head, the moment I started thinking beyond the one client… and imagining we had 100 clients.

In short, it gave me a newfound reverence/respect for our Production environment. And it helped contextualize things for me, drawing a line between client issues, client desires, and our own, internal product growth/strategy/roadmap. 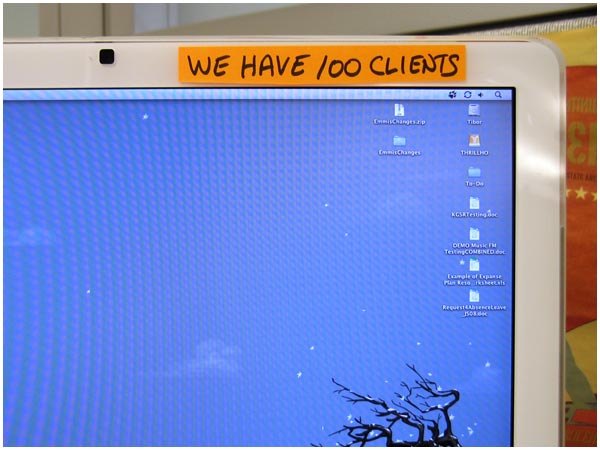 Since that time, I made a little note to myself… and put it on my computer. I wanted to remind myself that whenever I got too wrapped up in the small particulars, I needed to step back and keep the bigger picture in mind. I pasted this note about 10 months ago, and it’s been there ever since.

Today, there was an earnings call at our Corporate HQ in Indianapolis. And the Emmis CEO, Jeff Smulyan, had a few nice things to say about our Interactive group:

This has been a pretty incredible year so far.

« The Early Bird
What Tina Fey Would Do for a SoyJoy: Product Placement in Movies and TV »