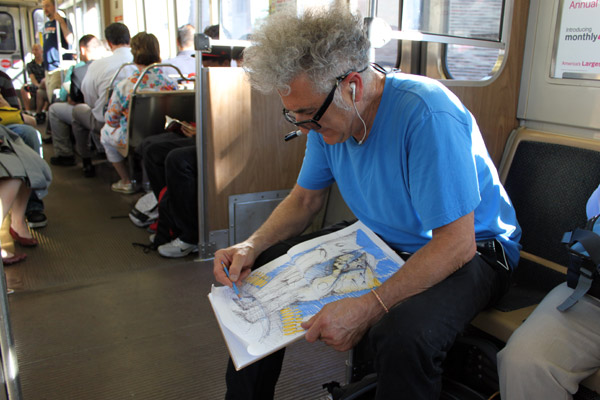 I’ve seen this guy on the Blue Line before, but finally got the nerve to take a photo of him at work. He seems to pop up on my car I’d say once every month or so, with his David Lynchian hair and his fistful of pens/pencils. He usually carries a backpack with him (which I’m assuming is chock full of supplies), and typically has headphones in his ears.

I can never tell where he boards and where he exits. He just seems to appear, plops down, and cracks open his book. It’s a bit brazen, the way he works out in the open. And his style is such that he’s almost doing it for the benefit of the other passengers. But like everyone else, once I get a peek at what he’s doing… I’m fascinated. Of the few sketches I’ve glimpsed, I’ve liked them all. I think they’re all quite good.

From time to time, I’ve seen him sketch other passengers. He’ll dart glances up, then back down to his book. Most of the time, the subjects of his sketches aren’t aware that he’s drawing them.

I’ll be quite honest with you: at first, I wasn’t sure if he was crazy or not. The guy never looked up, and was solely concentrating on his work. As he would draw, he’d occasionally extend his right leg straight as an arrow, into the aisle. At other moments, he’d be making heavy pencil strokes while tapping his foot to music.

I was able to wave my hand in front of his face, and got his attention. I pointed to my camera, then to him, then to his sketch. He half-laughed and half-grunted, and immediately went back to work. I took this as a good sign and snapped a few photos.

As he was shuffling about, I happened to see him flip through a few other sketches in his book. I’d say the thing is probably half-full of illustrations, most of which I assume were done while riding the Blue Line. I saw a lot of flashes of color, and had a strong desire to flip through every page. Having seen him working on multiple sketches, multiple times… I’ve always been fascinated with the images I’ve seen.

The way this guy sketched, it was very quick and very deliberate. He didn’t pause and debate his movements – he was a blur of pencil and arm, as though the act of physical motion were trying to catch up with the images in his brain. The pace he kept made me think that he had a multitude of images bursting forth from him, and it was all he could do to record as much of it as spilled out.

It was as though he was locked in some kind of race, and he needed to transfer his illustrations to paper as quickly as possible. And that every moment, even the ones spent riding on the CTA Blue Line, were moments not to be wasted.

I kept thinking to myself: if he’s able to do this kind of work while riding the train, what’s his A Game look like? What’s the stuff he does when he’s comfortable, back at his house in a pair of slippers getting his drink on? 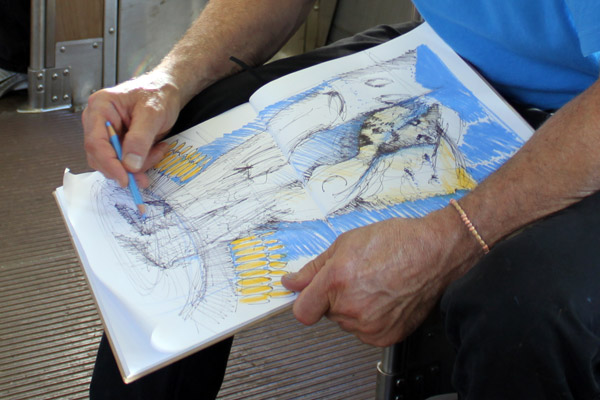 Sketch detail. I tried, unsuccessfully, to get his attention a second time. I had written out a note on my iPhone, and I was going to show it to him – asking if he had a business card or a website, or some place I could see more of his work.

Unfortunately, I never got the chance. He was too into his thing, and never looked up at me again. When we arrived at the Logan stop, I caught his eye as I walked out the door. He smiled at me, nodded and said Thanks.

The way he interacted with me as I left, I thought Ok, not crazy. And it made me feel like, the next time I see him… I’m going to try to ask his name, to ask where I might find some of his other work. And maybe, if I’m brave enough, I’ll ask to flip through the pages of his book.

cta
« Growing Up in Arcades
Elevators, Like God, Make No Promises »