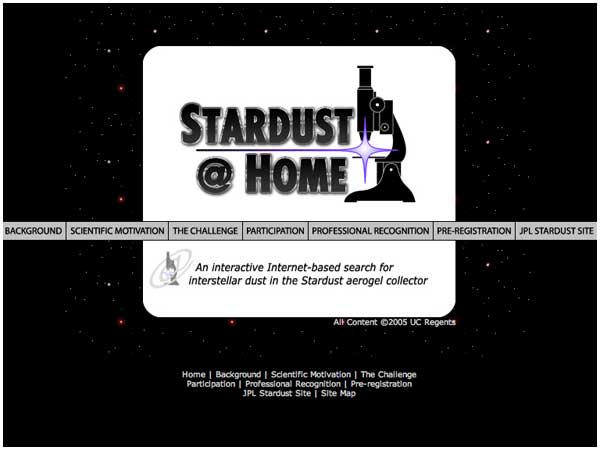 There’s something a-brewing over at Berkeley again. Similar to their prior multi-user projects like SETI@Home (which I participated in, for a long time), the Stardust@Home project affords would-be researchers to help lend their eyes in search of dust grains from the recent Stardust spacecraft. Unlike SETI@Home though, this isn’t just some program you let run on your computer when it idles. This is active searching, and you can’t participate until you’ve passed a test.

While the barrier to entry is a bit steep, I really dig what Berkeley has done with their distributed search projects. They’ve revolutionized research with this projects in the same manner that, say, P2P programs or Bit Torrent has revolutionzed the music industry. It’s just such a cool approach – I love the fact that thousands upon thousands of desktop computers end up being more powerful (and more efficient) than one giant supercomputer.

Below are some blurbs I’ve pulled from the official website.

The history:
In January 2004, the Stardust spacecraft flew through the coma of comet Wild2 and captured thousands of cometary dust grains in special aerogel collectors. Two years later, in January 2006, Stardust will return these dust grains — the first sample return from a solid solar-system body beyond the Moon — to Earth.

The challenge:
The job is roughly equivalent to searching for 45 ants in an entire football field, one 2 inch by 2 inch square at a time! More than 1.6 million individual fields of view will have to searched to find the interstellar dust grains. We estimate that it would take more than twenty years of continuous scanning for us to search the entire collector by ourselves.