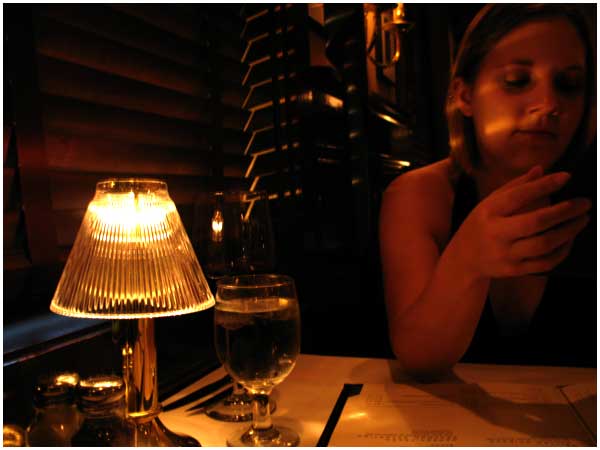 So it’s been officially two weeks that Liz and I have been on our diet. As a sort of celebration (and also because it’s been a while since we’ve really eaten out anywhere), we planned for a nice evening out. We threw on some nice clothes, and headed over to Ruth’s Chris Steak House downtown.

This is a place that Liz’s mom and stepdad like to go to, when they’re in town for a nice meal. And let me say – after tonight, I can see why. Wow.

Earlier in the week, I had to stop looking at their menu, because I got hungry every time I glanced at it. Tonight, I ended up getting the New York Strip and Liz got the Petitet Filet. The entrees are served on hot, hot dishes. I think our server said that the dishes themselves are heated to about 450 degrees – so they’re literally sizzling when they arrive on the table.

In addition to the steaks, we got broccli and potatoes au gratin. Having just entered the second phase of the diet, potatoes are back on the menu (although they’re meant to be eaten only occasionally). The two of us also got a glass of wine each, and we split the chocolate cake for desert.

Eating out was a lot of fun. We took our time, and had some great talks over our meal. It’s been a while since we’ve gone out like this, and it felt pretty darn good.