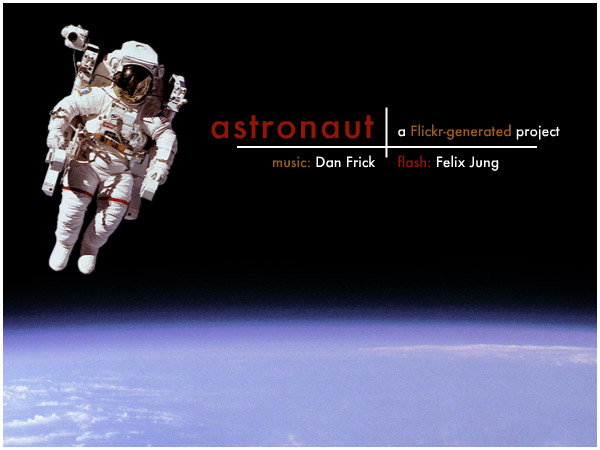 I have this weird thing about songs I like.

If I find one that I’m really into… I’ll listen to it. Obsessively.

And for some reason, I’ve got a higher threshold than most, when it comes to repetitive tracks. I can easily listen to something a hundred times in a row. It’s as though, once I’ve found a song I enjoy… I just don’t want to let it go.

A long while back, my friend Dan Frick sent me an album he made. Among the many songs on that CD, the one that caught me most was the opening track, a song titled Astronaut.

Instead of looking at groups of photos from one particular user, or looking at one particular tag from a group of users… I decided to gather the keywords from a song, and to make the song lyrics their own “group,” so to speak.

I’ve long been fascinated with repetition and variation, I like seeing both the patterns and the divergences that inevitably appear. One of my favorite Flash/Photo projects involved multiple people, working within a set constraint.

At the You Are I Am gallery show in Chicago, participants received a piece of paper with the words “I AM” next to a big blank space. While each person was photographed with the same piece of paper, everyone “said” something different about themselves. Repetition and variation. Love that stuff.

Tags work in a really similar way on Flickr. On their own, they’re a great way to organize your photos. But stretched across multiple users (who use the same tag on their photos), you can search for “dog” and get a thousand different results. A thousand at least.

Listening to Dan’s song, the speaker makes me think of someone fairly isolated – far away either due to distance, or time or both. When thinking of Flickr, I think of a multitude of people, all of them interacting with one another – sharing photos, comments, memories. I liked the juxtoposition of someone singing about solitude, but having his words represented by… well… by everyone else. By the rest of the world.

Each time the Flash file is loaded, new images are randomly pulled from Flickr. I’ve hard-coded 53 keywords at set points in the song, and when the page is first loaded… calls are made out to Flickr to retrieve these keywords. With each call, I vary the parameters a little bit.

In some cases, I’ve taken a few liberties with my searching. Instead of sticking exactly to the lyrics, I’ve substituted words in certain places, either to elicit an effect, or due to the fact that the word itself wasn’t returning enough results. I’ve tried searching all text, but found that searching specifically for matching tags proved the most accurate.

Over the past few weeks in testing this, I’ve noticed the photos changing. Over time, as new photos are added, the range of photos simply increases. I’ve seen several moments where the sequence of images was spot-on and absolutely breath-taking; I’ve also seen other moments where the photos are more humorous in nature, and totally subvert what’s going on in the song.

I hope you enjoy the project (despite the somewhat lengthly load time). And I truly hope you like the song. Dan is a friend of mine from way back. He’s a good guy, and a good musician to boot. There aren’t enough people who know about him, and that’s a shame… because he’s got some great songs.

In creating this project, I’ve attempted to create a little randomized sliver of time for you to look at and examine. Hopefully, you’ll be inclined to set that sliver down and pick up another. And another.

I hope, after hearing and seeing all this, you don’t feel so far away.