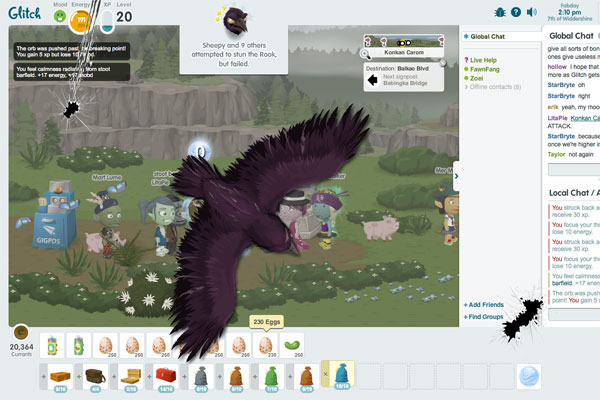 Sometime on Friday evening, I happened to be present within the Glitch world for a rook attack. Not sure exactly what these guys are, or how they fit into the overall storyline of the world… but it was an interesting experience.

Similar to street-building, you were able to team-up with others to perform a specific task. In this case, we were trying to stun a rook and prevent it from… well, honestly? I’m not sure. I showed up, and all this crap was sort of happening.

As people were trying to group together to stun the thing, it appeared as an overlay… flying and moving above the game (and the user interface). It’s not a new technique, but it was a fun twist to see the rook actually damage portions of the game screen itself.

If anyone wants an invite, drop me a line – it looks like they upped the number.