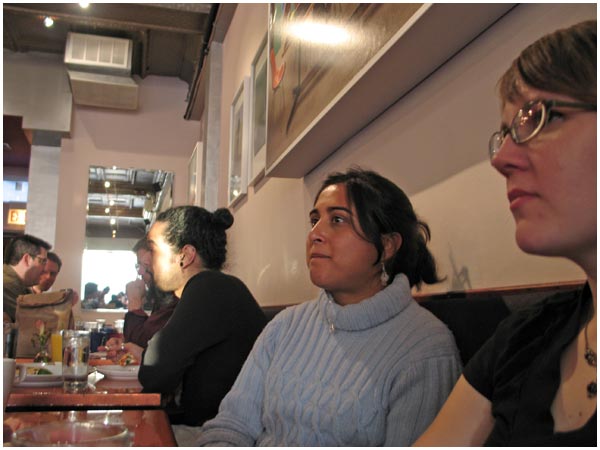 I got an email from my friend Dipti last week, and prior to her flight out of Chicago… we all met up for dinner at Lula Cafe in Logan Square. This is a shot of Dipti and Liz, talking a bit over a late lunch.

It’s been a long, long while since I’ve seen Dipti and Jeff. And in part too, I don’t tend to take a lot of photos when I’m around them. Since they’re both professional photographers, I think I get a little gun shy. I’m like this around Stu sometimes as well.

The last time Dipti, Jeff and I hung out… it was at their wedding, about 4 years ago. Prior to that, Dipti and I hung out a bit when she visited Chicago briefly, prior to the wedding. And before that… it was way back in 2002 on a roadtrip to Columbus. 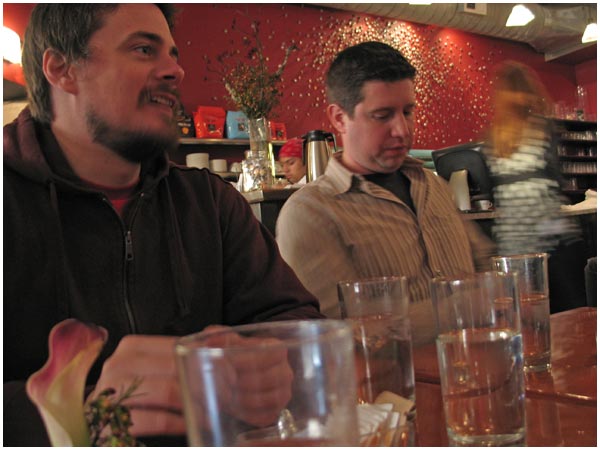 Justin and Jeff, talking a bit about Justin’s upcoming four-month trek over to India.

The meal (as is always the case at Lula) was delicious, and a nice relaxing bit of catching up. It was cool to have everyone congregate together, and it was especially neat to weave a bit back into the past, where my, Dipti and Justin’s paths crossed (in high school, in college, in grad school).

We all parted ways soon after the meal. Dipti and Jeff went off to wander around Wicker Park prior to their flight out, and Justin, Liz and I headed back home.

What an event-filled weekend. In looking back, I was surrounded by a lot of friends – old and new. As far away as some of them are, I’m realizing that, really, they’re not far away at all. It feels good picking up with folks you haven’t seen in a long time, and it feels even better when that picking up is seamless, as though no time had passed whatsoever.

That good feeling is telling you you made a good choice, in your friends.

« Scooter Recovery
Looking for Love: NY Girl of My Dreams »