Over a period of about 6 weeks or so (what we dub a “sprint”), our developers see the culmination of their work as a “Push” to our Production servers. We take all the code and development work that’s been done, and move it from our Staging environment over to our Production (live) environment.

To minimize the impact this process has on clients, we do it in the middle of the week. And we do it late, late at night.

The challenge is that, with many of our clients being radio-specific, many of them have ongoing contests or promotions. And almost all have some kind of “Morning Drive” show, which is a big, big thing for radio stations. Most morning shows tend to start around 5AM, if not earlier… as they’re trying to catch nearly everyone who’s on their way in to work.

For our “Push” to Production, a portion of the developers come in at around 11PM to work in a maintenance window of between 2AM – 5AM. And while they get time off the day before/after, it’s still a pretty brutal schedule to keep.

Last time around, Ben and Allison came in early and helped prepare a great breakfast for the Dev crew. Today, I volunteered for breakfast duty, and got to prepare the morning’s meal.

Here’s a quick snapshot of my kitchen counter, circa 3:30 AM. Liz was AWESOME and made not one but two delicious treats: two loaves of banana bread and a batch of her famous oatmeal cookies. BEST_FIANCE_EVER.

Prior to heading in, I needed to cook up some eggs. Since we don’t have any real way to cook up eggs (besides using the microwave), I figured it would be best to make some at home… and just transport them in. I’ve never really cooked two dozen eggs before, so that was an interesting process. 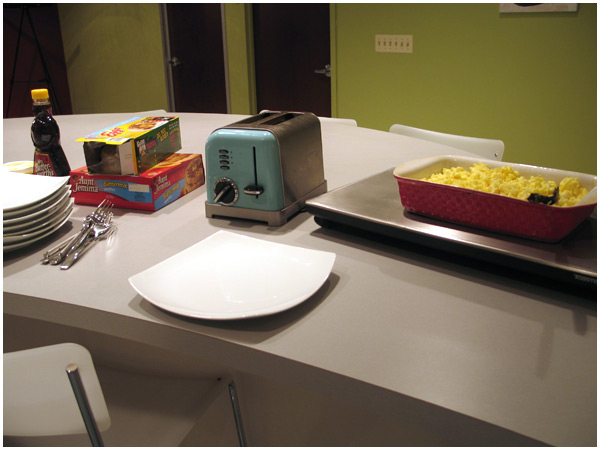 Setting up in the kitchen at work, circa 4:45 AM. I got out one of our food warmer trays, and set the eggs up. I also brought in Liz’s toaster (of course, it’s teal) and some waffles. I heated up some sausage links in the microwave and… breakfast time! 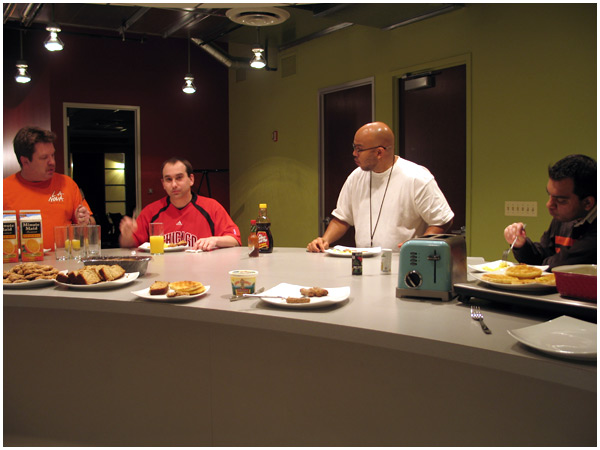 A few of the folks, getting some food in near the end of the Production Push. L to R it’s Walt, Jeff, Darren and Ajith (not pictured: Kashif, Matt and Alex).

Having worked my fair share of late nights, I know what the tail end of that shift is like… and how nice it can be to have something to cap off the evening’s work (in the past, I got used to having what we called victory beers).

I’m glad to have helped a bit today, even if my contribution wasn’t code-related and was more food-related. Coffee is tasting pretty darn good, right about now.

// Edit: Overheard just a few minutes ago –
Tracey: Darren, you were right.
Darren: Those cookies are trouble, aren’t they?