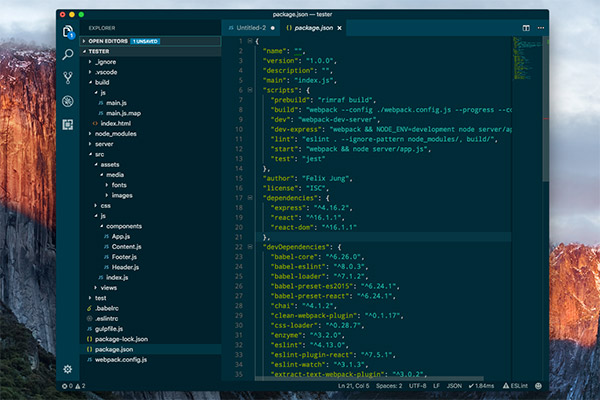 I’ve been using Sublime Text for a long while now, and have been pretty happy with it over the years. I tried, briefly, switching over to Atom – and while I found it pleasurable to work in… I ultimately went back to Sublime after a few weeks.

I’m late to the Visual Studio Code train, but have been curious about it. After listening to a small bit on why some devs are switching and also learning that Wes Bos switched over to it… I decided it was worth a look.

I’m not sure who said it (possibly also Bos), but a part of the challenge in front end dev is keeping up with the new hotness. Everyone has limited time and attention, but there seems to be this endless number of new things to learn.

The best approach to that: keep an ear out for things that recur. I follow a number of developers on Twitter, and subscribe to a few newsletters (that I try to read/scan, but just tend to accrue in my Inbox). And I think this was the gist of Bos’ suggestion: when something starts to pop up more frequently, at that point it may be worth checking out.

I downloaded Visual Studio Code on my work machine, but didn’t get around to doing more than just installing it. Fired it up at home tonight, and tinkered around for a long while.

I haven’t done much beyond setting up a a theme (Solarized Dark for now), and spending more time than I care to admit looking at icon themes. As much as I like the look/idea of file icons, the top ones made my Explorer window look like a Hong Kong street scene (I went with Seti).

For extensions, so far I’ve set up just a few. The fact that there is a Sublime Text Keymap extension, allowing me to use a lot of the shortcuts I already know, is pretty dang hot.

As I looked around for extensions and to see what other extensions devs use, I found myself thinking about how much time I used to spend on a PC in college… looking for different wallpapers and .wav files. I spent an inordinate amount of time doing that kind of pointless customization.

I’m a bit torn on this thought, as customizing one’s editor isn’t totally pointless. Developers spend most of their working hours (and many personal ones) looking and working within their editors – so they really should be customized for comfort and efficiency.

But I’m also reminded of this warning from @MPJ about tooling and procrastination.

For now, I’m going to try to jump between both editors and see how things go. There’s tons to learn, and it’ll be interesting to see whether I stick with VS Code or go back to Sublime.

As a note: I’m writing this post in Sublime. Muscle memory and all that.