Today was an early day, as I was drafted into work last night to help with the Festival. Everyone who works as a volunteer for the festival gets a yellow shirt – and I got mine this morning.

My alarm went off at 6:30 AM, and I was the first to hit the shower. By the time I walked into the kitchen (sporting my new yellow shirt), Liz’s sister Tricia was making eggs and sausage for breakfast.

Dan, Liz’s brother in law, stopped by and chatted with us while Darryl and I scarfed down breakfast. Today was an early day, as Liz’s dad wanted to get going by 8 AM. He, apparently, is an early morning guy and is usually up long before anyone else.

Darryl was running a bit behind, due to him being hit with both a fever and some pretty heavy-duty allergies, and stayed to finish his breakfast. Dan and I hopped into the truck and headed off to our first job.

Sadly, I didn’t have my camera with me for a good part of the day. Which, believe it or not, was kind of a good thing. Freed from having the ability to document things, I didn’t have to worry about it at all – I just took things as they came, and enjoyed myself. Felt kinda good.

Dan and I got paired up with another volunteer who drove us around town. Dan and I would occasionally jump out of his truck and set up a few placards, each with information as to where people should go to drop off parade participants. We kept the back flap down, and rode around town sitting on the edge of the truck bed, our feet danging over the road. It’s been a really long while since I’ve done anything like this, and I have to tell you – it felt great.

The sun was out, the day was bright but not overly hot. And I got to watch the world go by from the back of a truck. Pretty cool stuff.

After the signs were up, we went near a local plant and shoved a few signs into the grass. The parking lot next to this plant was where all the parade participants wouuld line up, so we were helping to mark off certain areas.

Dan and I met up with Darryl after this, and the three of us hung around for a while, waiting for something to do. Eventually Darryl’s condition got so bad that he decided to head home so he could sleep things off (the fever/allergy combo was doing a number on him). Dan and I then accompanied Liz’s dad over to Home Depot. There, we got a bunch of 2×4’s to build a quick and dirty platform for the parade judges.

Everything was fairly slow in terms of our pace, but you could tell that there was an underlying urgency in almost every action. From Home Depot we drove over to Ted’s house where we met up with Ted. There, Bob (Liz’s dad) started assembling the base while Ted cut the legs to fit. In the space of about 20 minutes, there was a ton of work done. Mostly, I was just watching, but it was cool to see how quickly both Bob and Ted were working.

The platform got about 60% done, and then we decided to finish the rest on-site. We packed up the platform, I joined Dan on the back of Bob’s truck, and we drove everything over to the end of the parade route. There, we started to assemble things… but then Bob got called away. I jumped into the truck with him, and the two of us drove back to the factory parking lot, where all the parade participants were starting to show up.

At the parking lot, Bob hopped out and gave me his credit card. I took his truck and went to the nearby gas station to fill it up. Not knowing the area (and not having driven a vehicle of this size in a while) made the errand pretty interesting and exciting. On my way back, it was pretty fun to roll past various checkpoints, with people slowing me down then seeing my yellow shirt and waving me on.

After dropping off Bob’s keys, I got passed on to Ted and hopped into his truck. We drove to Bob’s house, tracked down a few pieces of wood, and then returned to the judges’ area. There, he, Dan and I began setting up an American Flag on the back of a flatbed truck. This was to serve as a backdrop for the local TV coverage. This was a very cool thing to do, and I felt pretty proud to be able to help with this particular aspect of the festival. At one point, we had the flag fastened to a pole and I was carrying it to the truck, the flag flapping away in the breeze. I felt like revolutionary, ever so briefly (and I remember one guy who looked at me, as he walked by, and said “Looking good!”).

After securing the flag (through a combination of duct tape, zip ties, and wood clamps, Ted’s wife came by. We found out that the Barbershop Quartet had a last-minute cancellation. They sang the national anthem last year, but they were missing one or two people today… and were unable to sing at the start of the parade.

Dan then spoke up, and said that he thought his wife (Liz’s sister) would be able to cover. “Katie can sing it,” he said, and then went to call her on his cellphone. A few minutes later, Katie said yes and we had someone to do the national anthem – just like that.

I lost track of Ted, who took off to attend to another aspect of the parade. Katie showed up, and we talked a little bit. She had her song Cameron in tow, and was still trying to get herself ready to sing in front of everyone. Soon after she left to change, I spotted Liz, her sister Tricia, and Liz’s mom arrive on the scene.

Tricia set up camp near the street corner, and Liz’s mom found out that her daughter was going to sing the national anthem. Liz’s mom (being one of the festival volunteers/organizers) had one of those golf cart type cars, and offered to give us a lift home. We were in a bit of a rush, as she didn’t want to miss Katie’s singing – but we drove back and got our cameras. 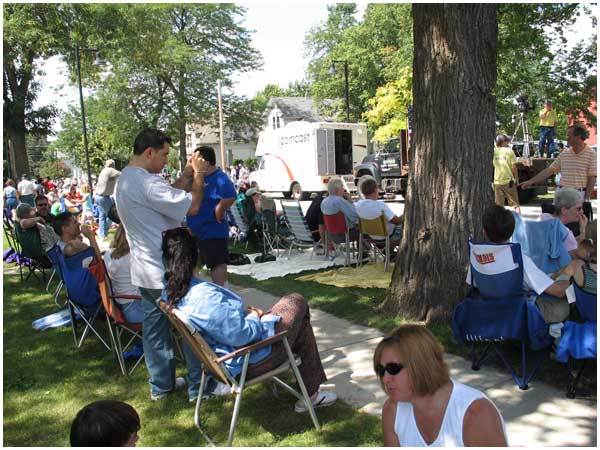 After not having a camera all day, I broke it out for a few quick snapshots.

This is a view of the crowd from where we were sitting. 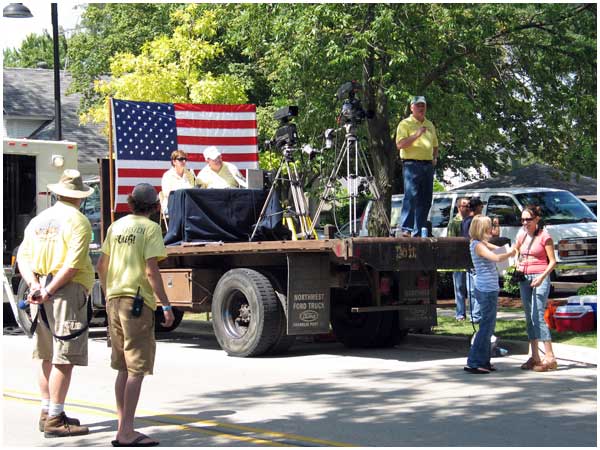 And this would be the truck bed, where the local TV coverage was taking place. The flag, behind the desk, is what I helped set up. 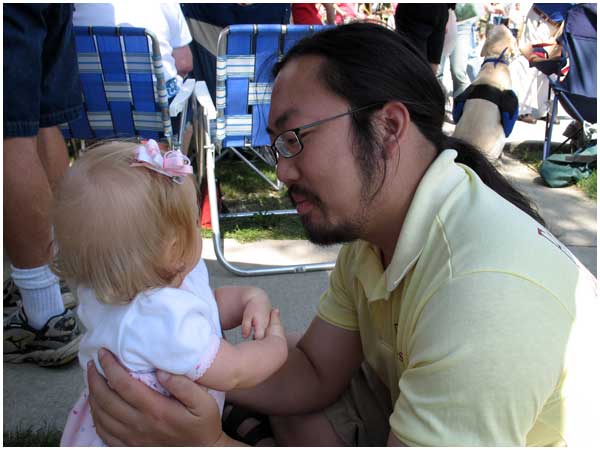 LIz grabbed my camera when I wasn’t looking, and took this shot of me with Savannah (Katie’s daughter). I’ve had the good fortune to see her the past few family functions, and I must confess – I’m getting a little crush on her. 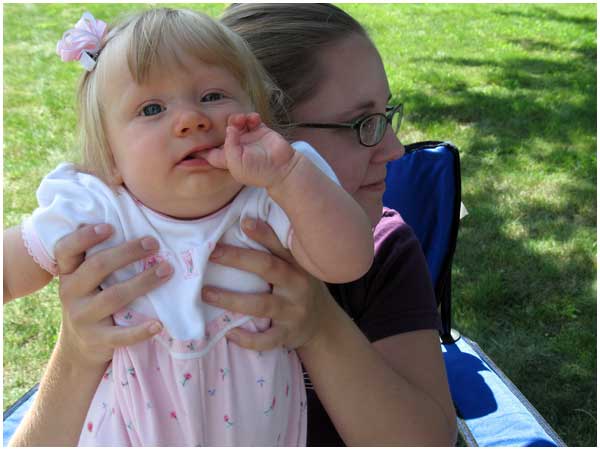 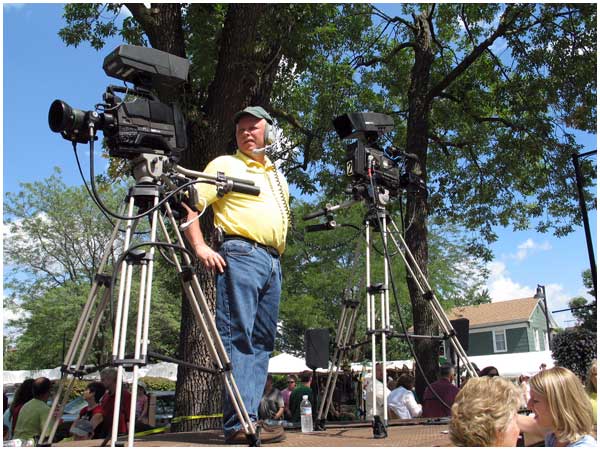 The anthem wasn’t going to begin until the parade was a few blocks away. I snuck over next to Liz’s mom, near the camera truck, so I could get a better angle. 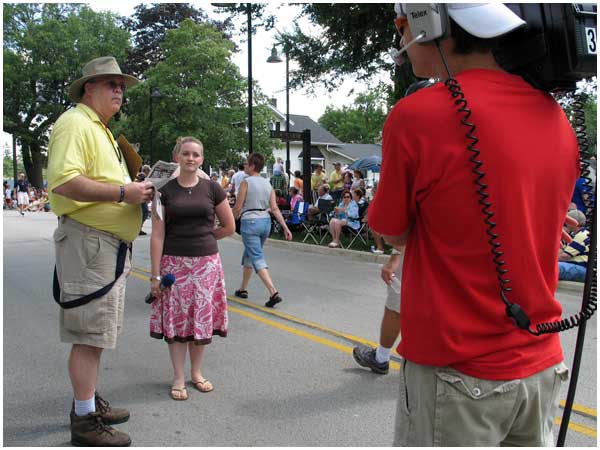 Katie, getting some last-minute instructions. The more I think about it, the more impressed I am. T
en minutes before the actual start of the parade, they had no one to sing. Katie stepped up and agreed to do it, in front of the crowd as well as two television cameras. Very, very impressive. 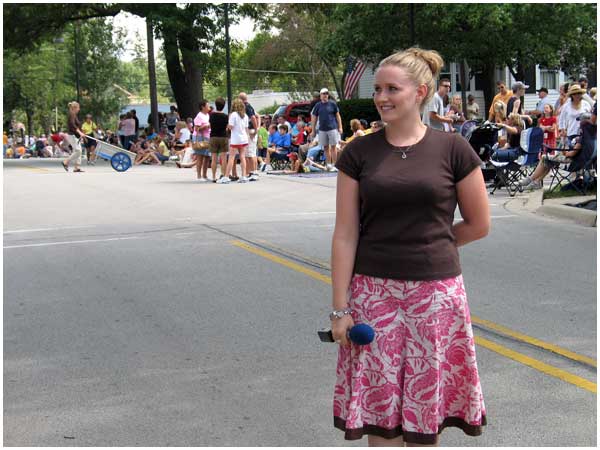 Katie, about to get her cue. 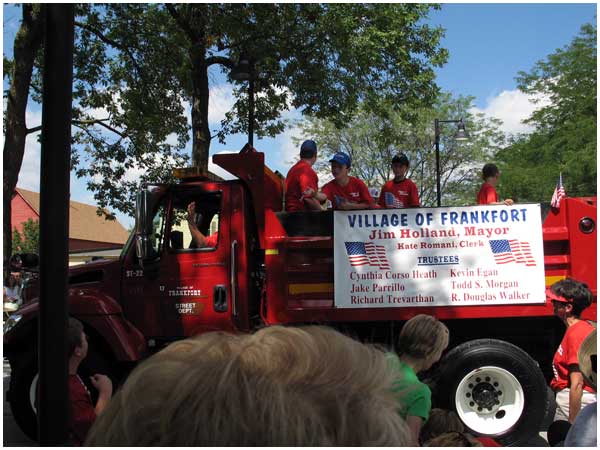 I only took a few shots of the parade itself. A tradition, it seems, is for the people on the various floats/vehicles to throw out candy to the onlookers. I stole my fair share of Tootsie Rolls off the ground, for a quick afternoon snack.

This was a great idea, as most of the kids I saw all had little plastic bags, and went crazy everytime they got showered with candy. 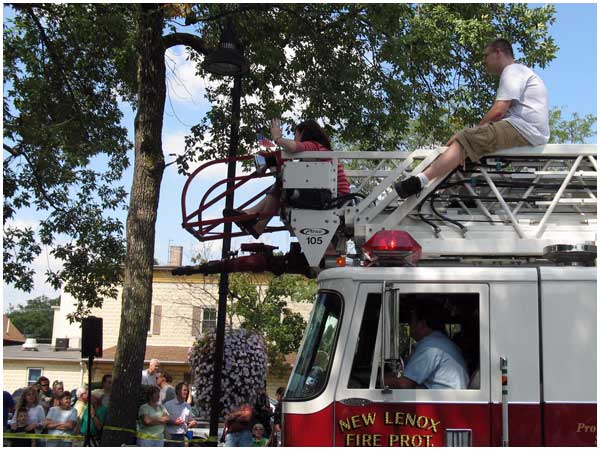 The only thing cooler than a firetruck is being able to ride on top of a firetruck.

At some point, there was some kind of mixup. Apparently, Bob needed the keys to his truck. Turns out, he was going to be bringing up the tail end of the parade, and needed the keys to his truck. I had given Bob his keys back, but I think that his keys were then given to Ted (who used them to get into Bob’s shed). At any rate – Bob needed a set of keys, and so Liz and I volunteered to go back to the house, grab a spare set, and deliver them.

She and I got to comandeer the golf cart, and headed on yet another errand for the day. 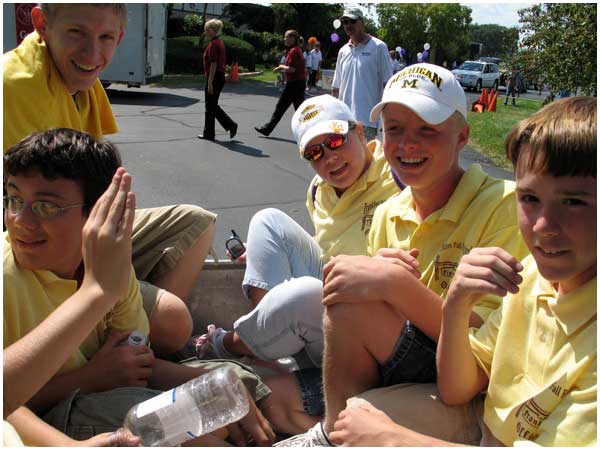 At the parking lot, we learned that a bunch of younger volunteers needed a ride back downtown. Liz and I both shrugged and told everyone to get in. I snapped this quick shot of the kids who crammed into the back of the vehicle.

All day today, it’s been a constant flurry of people in and out of cars, people giving one another rides, etc. There’s a small town, neighborhood feel to everything that makes you feel good… and you just can’t help smiling when it happens. 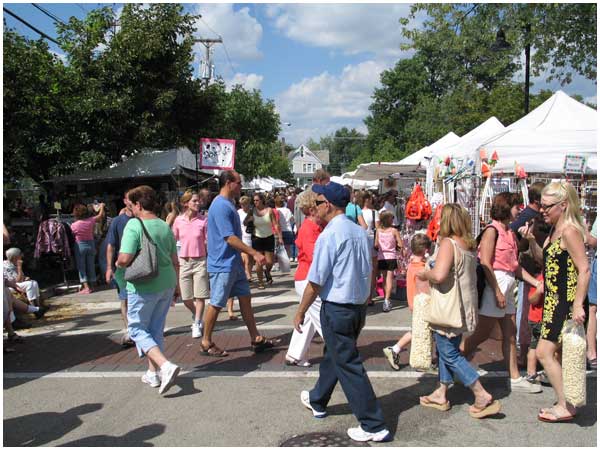 I started getting hungry, and so Liz and I decided to head into the festival itself in search of some food. Her cousin John joined us, as we made our way to the food court.

This is a quick shot of the various booths that comprise the festival. Lots of crafts and knicknacks; there’s also a midway/rides section, which I never got around to seeing. 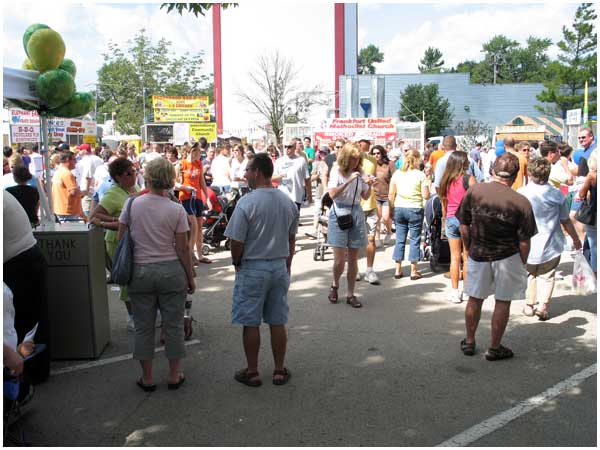 Food court, and all sorts of fried goodness.